What is a chroot Jail?

A chroot on Unix operating systems is an operation that changes the apparent root directory for the current running process and its children. The programs that run in this modified environment cannot access the files outside the designated directory tree. This essentially limits their access to a directory tree and thus they get the name “chroot jail”.

The idea is that you create a directory tree where you copy or link in all the system files needed for a process to run. You then use the chroot system call to change the root directory to be at the base of this new tree and start the process running in that chrooted environment. Since it can’t actually reference paths outside the modified root, it can’t maliciously read or write to those locations.

How do i use it?
The basic command to create a chroot jail is as follows:

1. Create a directory which will act as the root of the command.

The final directory structure must be similar to this, 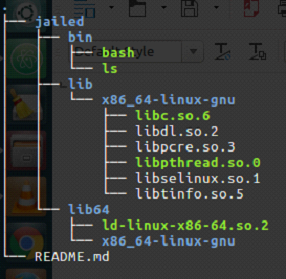 5. Sudo chroot:Run this command to change the root to the JAILED directory, along with the path to the shell. By default it will try to load ‘/bin/sh’ shell.

You might face this error while running the chroot command,

This may be due to 2 reasons, either the file does not exist(which is obvious), or when the loading library fails or is not available. Double-Check if the libraries are in correct location.

6. A new shell must pop up:Its our jailed bash. We currently have only 2 commands installed, bash and ls. Fortunately cd and pwd are builtin commands in bash shell, and so you can use them as well.

Roam around the directory, try accessing ‘cd /../’ or something similar. Try to break the jail, probably you won’t be able to. 🙂

To exit from the jail,

The most important and interesting part is that, when you run,

and find the process, you’ll find that there is only one process,

Interestingly, processes in the jailed shell run as a simple child process of this shell. All the processes inside the JAILED environment, are just simple user level process in the host OS and are isolated by the namespaces provided by the kernel, thus there is minimal overhead and as an added benefit we get isolation.

A copy of jailed-bash-directory explained here can be downloaded from here.

Similarly, you can add more commands to you virtual jailed environment. To add more complex programs, you might need to create more directories, like, ‘/proc’ and ‘/dev’. These increase the complexity of the process. Hopefully we do not require it for our purpose.

This is all you need to know about chroot and the jailing of directories. Our ultimate aim is to understand what are containers and how are services like AWS (Amazon Web Services), Google Cloud and Docker able to provide so many virtual instances of operating systems on demand. Also, how does sys-admin run multiple web-servers for multiple domains on a single physical machine.This was just one step towards understanding it 🙂

About the Author:
Pinkesh Badjatiya hails from IIIT Hyderabad. He is a geek at heart with ample projects worth looking for. His project work can be seen here.

If you also wish to showcase your blog here, please see GBlog for guest blog writing on GeeksforGeeks.

Complete Interview Preparation
View Details
System Design-Live Classes for Working Professionals
View Details
Data Structures & Algorithms- Self Paced Course
View Details
Most popular in Linux-Unix
More related articles in Linux-Unix
We use cookies to ensure you have the best browsing experience on our website. By using our site, you acknowledge that you have read and understood our Cookie Policy & Privacy Policy