About 2500 species of perennial, herbaceous monocots make up the Liliaceae family. They are also known as the “lily family” There are 4000 different species and 250 genera of plants in the Liliaceae family. In contrast, there are 169 species in India. They serve as the foundational monocot stock from which the other monocot family has descended and are regarded as typical monocot families. It has some similarities to certain families, particularly the Amarydilaceae and Juncaceae. However, it varies from others due to the presence of the superior ovary and axil placentation. This family of plants is referred to as the lily family. Aloe, Lilium, Tulip, and others are some examples of plants. The flowers of the Liliaceae family are actinomorphic, bracteate, hypogynous, complete, and bisexual. The perianth is made up of six tepals in two whorls of three (polyphyllous or gamophyllous), usually fused into a tube, valvate aestivation, and an occasional tepal anterior. The androecium is polyandrous, epiphyllous, has a dithecous, basifixed or versatile, introrse anther, and has six stamens in two whorls (3 + 3). Syncarpous ovary, axile placentation, trilocular, and trifid stigma in a tricarpellary gynoecium 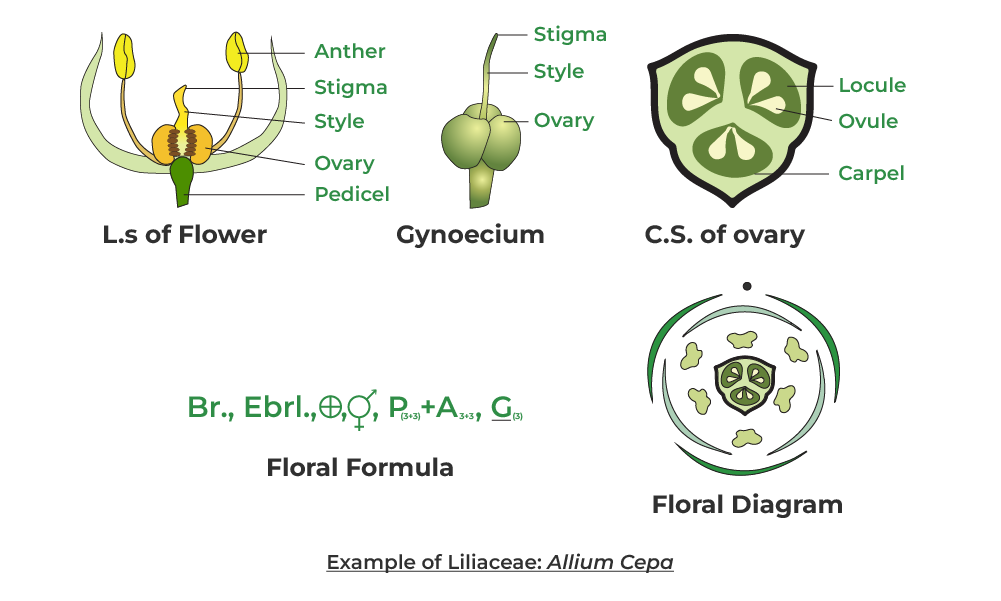 In the floral formula of Liliaceae:

Twelve divisions can be made within the family of Liliaceae.

The Liliaceae family’s salient traits include the following:

Question 1: Define morphological characteristics and write an example of them.

Morphological characteristics are defined as the traits which describe the morphology of organisms. Examples include:

Question 2: Write the common examples of the family Liliaceae.

Question 3: What do Br, P(3+3), and G3 represent in the floral formula of Liliaceae?

There is various economic importance of Liliaceae:
1. Used in medicines
2. Used as field yielding plant
3. Used as an ornamental plant.
4. Used in cosmetics
5. Used as a source of food

Question 5: Name the types of Liliaceae.