OSI stands for Open Systems Interconnection. It has been developed by ISO – ‘International Organization for Standardization‘, in the year 1984. It is a 7 layer architecture with each layer having specific functionality to perform. All these 7 layers work collaboratively to transmit the data from one person to another across the globe.

The lowest layer of the OSI reference model is the physical layer. It is responsible for the actual physical connection between the devices. The physical layer contains information in the form of bits. It is responsible for transmitting individual bits from one node to the next. When receiving data, this layer will get the signal received and convert it into 0s and 1s and send them to the Data Link layer, which will put the frame back together.

The functions of the physical layer are as follows:

The data link layer is responsible for the node-to-node delivery of the message. The main function of this layer is to make sure data transfer is error-free from one node to another, over the physical layer. When a packet arrives in a network, it is the responsibility of DLL to transmit it to the Host using its MAC address.
Data Link Layer is divided into two sublayers:

The packet received from the Network layer is further divided into frames depending on the frame size of NIC(Network Interface Card). DLL also encapsulates Sender and Receiver’s MAC address in the header.

The Receiver’s MAC address is obtained by placing an ARP(Address Resolution Protocol) request onto the wire asking “Who has that IP address?” and the destination host will reply with its MAC address.

The functions of the Data Link layer are :

The network layer works for the transmission of data from one host to the other located in different networks. It also takes care of packet routing i.e. selection of the shortest path to transmit the packet, from the number of routes available. The sender & receiver’s IP addresses are placed in the header by the network layer.

The functions of the Network layer are :

At sender’s side: Transport layer receives the formatted data from the upper layers, performs Segmentation, and also implements Flow & Error control to ensure proper data transmission. It also adds Source and Destination port numbers in its header and forwards the segmented data to the Network Layer.

Note: The sender needs to know the port number associated with the receiver’s application.

At receiver’s side: Transport Layer reads the port number from its header and forwards the Data which it has received to the respective application. It also performs sequencing and reassembling of the segmented data.

The functions of the transport layer are as follows:

The services provided by the transport layer :

A. Connection-Oriented Service: It is a three-phase process that includes

B. Connectionless service: It is a one-phase process and includes Data Transfer. In this type of transmission, the receiver does not acknowledge receipt of a packet. This approach allows for much faster communication between devices. Connection-oriented service is more reliable than connectionless Service.

This layer is responsible for the establishment of connection, maintenance of sessions, authentication, and also ensures security.
The functions of the session layer are :

**All the below 3 layers(including Session Layer) are integrated as a single layer in the TCP/IP model as “Application Layer”.
**Implementation of these 3 layers is done by the network application itself. These are also known as Upper Layers or Software Layers.

Let us consider a scenario where a user wants to send a message through some Messenger application running in his browser. The “Messenger” here acts as the application layer which provides the user with an interface to create the data. This message or so-called Data is compressed, encrypted (if any secure data), and converted into bits (0’s and 1’s) so that it can be transmitted.

At the very top of the OSI Reference Model stack of layers, we find the Application layer which is implemented by the network applications. These applications produce the data, which has to be transferred over the network. This layer also serves as a window for the application services to access the network and for displaying the received information to the user.

The functions of the Application layer are :

OSI model acts as a reference model and is not implemented on the Internet because of its late invention. The current model being used is the TCP/IP model.

OSI model in a nutshell 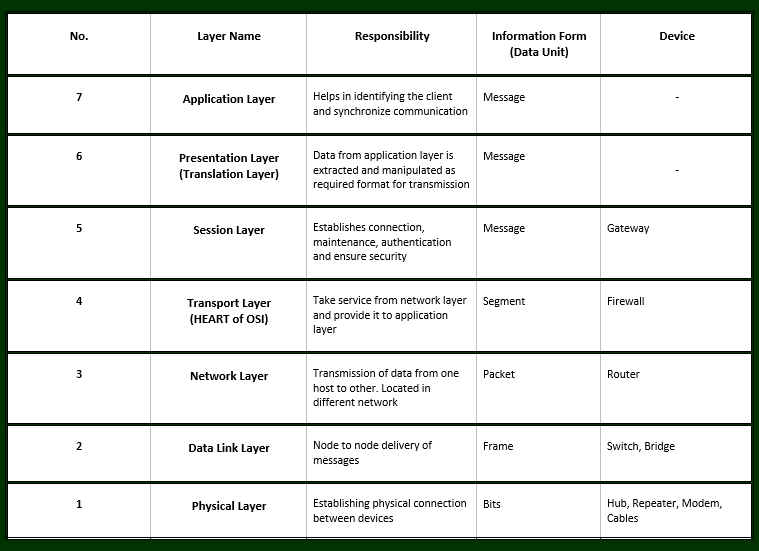