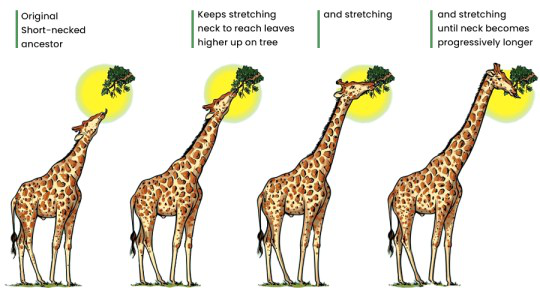 Postulates are nothing but the building blocks of this theory. These postulates easily define the main points of the theory. There are mainly four postulates. Those are:

Due to some reason, at any time any species can feel a special trait that can help out to overcome the situation. Due to any environmental changes, some species can need a special change in their organ to survive in nature. Or due to some predators, some species need to develop a special character, so that they can able to survive. This is the new need for that species. And this is the starting point of their evolutionary changes.

More Use & Disuse of the Organ

Due to the extensive need to change any traits, sometimes in any generation, those need gets fulfilled. Some generations may have new changes in it. Now it is completely their duty to use that feature. More & more use of the features more develops that. In this way, the species can able to strengthen their new changes.

Also, along with that, if any species found that any existing organ is no longer useable. They will stop taking help from that organ. In this way, they disuse or rarely use those organs. Hence, that will gradually decline the presence & working power of that organ.

Now, all those new changes will flow from generation to generation. This flow will make the changes stable in that species. This step ensures that every generation should have the same changes.

Now, after acquiring new changes, when all the changes are stable due to inheritance, they will build up a new species. This new species is completely different from their ancestors from where evolution takes started. In this way, a new species forms in nature.

Scientists believe that Lamarckism is the very first evolutionary theory. Lamarck studied the fossils of a certain animal & the living one. Studying both of them he made those four postulates. Basically, Darwinism is based upon Lamarckism. There are some changes. But the presence of nature is highly important in both of these theories. Also, upon researching this theory Synthesis Theory is being developed. And also, it is proof that there are many supportive examples against Lamarckism. But there are very few criticisms present which disagree with this theory. This theory helps to solve maximum problems which are related to evolutionary changes. As this theory is simpler than Darwinism, this theory is also accepted by many scientists.

Lamarck state that the evolution of the giraffe is an example of his four postulates. According to Lamarck, the ancestors of giraffes were similar to the horse. This means they are relatively small from their current figure. According to Lamarck, due to some natural disaster, small trees may get disappear from nature at any point in time. At that time, only big trees are present as the food source. For the creatures who are relatively small like horses, they are not able to get food sources from the top of any tree. This need triggers to get a stretched neck along with a bigger forelimb. This need once gets fulfilled in any generation of the ancestor giraffe. And as they use this feature more, this trait gets stronger over time. At last, this trait is inherited by the next generations. And from this current giraffe species comes nature.

The evolution of Ducks is another example of Lamarckism. According to Lamarck, the ancestors of ducks lived inland. They were not aquatic in nature at some point in time. But due to some reason, when they move to the water, they need to develop a special feature that helps them to swim. In this way, once in a generation, a skin-like structure developed in between their toes. This structure is known as the web. And as they started using it frequently, this feature get developed. Then this feature is inherited by the next generations. In this way, a completely new species of duck evolved.

According to Lamarck, Snacks once resided on the land & they have limbs. Like other animals, they had four limbs. But due to some reason, they feel to reduce the use of their limbs. As a result, their limbs became weaker & weaker. And at some point,  any generation might not have any legs. This feature is being inherited by generations. In this way, a new species is being developed. In the presence also, pelvic girdle, a hind limb structure can find in Python, Boa, etc.

According to Lamarck, the human evolution of the appendix is another example. In ancestor human, the appendix was more developed & useable. As humans that time ate green leaves. So the appendix helps to digest those leaves. But by the time, when humans get the knowledge of fire, they started cooking their food. So, at that time they reduce the use of the appendix. In this way, the current human appendix is an extinct structure present in the human body.

Scientist Cuvier experimented with Drosophila flies. He kept them in the darkroom & left them to breed. He did this experiment till the 75th generation of the files. But no species took birth as blind. Hence, he proved that flew did not acquire the changes & not inherited from their generations.

Question 1: What is the most important postulate among the four postulates?

The most important postulate is the “Inheritance of Acquired Characters”. Lamarck defined that some species can able to adapt new traits and use them. But species can’t able to always inherit those traits to their next generations. If they are able to inherit it, then they are successful to adapt those changes completely.

No, Lamarck’s theory is not accepted by present days scientists. As scientists developed a new theory which is called the Synthesis Theory. This theory is a combination of Lamarckism & Darwinism.

Question 3: What is Internal Vital Force in Lamarckism?

Internal Vital Force is willpower that forces a creature to adopt a new change in it. It is the driving power of the evolutionary process according to Lamarck.

Question 4: What is Epigenetics?

Epigenetics is the process of study where scientists study the environmental influence on evolution. In this study, how evolutionary changes affect the species is being measured.

Question 5: What type of evolution is followed by Lamarckism?