So using Dijkstra’s single-source shortest path seems to be a better option than Floyd Warshall’s Algorithm(https://www.geeksforgeeks.org/floyd-warshall-algorithm-dp-16/?ref=lbp) , but the problem with Dijkstra’s algorithm is, that it doesn’t work for negative weight edge. The idea of Johnson’s algorithm is to re-weight all edges and make them all positive, then apply Dijkstra’s algorithm for every vertex.

How to transform a given graph into a graph with all non-negative weight edges?

One may think of a simple approach of finding the minimum weight edge and adding this weight to all edges. Unfortunately, this doesn’t work as there may be a different number of edges in different paths (See this for an example). If there are multiple paths from a vertex u to v, then all paths must be increased by the same amount, so that the shortest path remains the shortest in the transformed graph. The idea of Johnson’s algorithm is to assign a weight to every vertex. Let the weight assigned to vertex u be h[u].

We reweight edges using vertex weights. For example, for an edge (u, v) of weight w(u, v), the new weight becomes w(u, v) + h[u] – h[v]. The great thing about this reweighting is, that all set of paths between any two vertices is increased by the same amount and all negative weights become non-negative. Consider any path between two vertices s and t, the weight of every path is increased by h[s] – h[t], and all h[] values of vertices on the path from s to t cancel each other.

How do we calculate h[] values?

How does the transformation ensure nonnegative weight edges?

The following property is always true about h[] values as they are the shortest distances.

The property simply means that the shortest distance from s to v must be smaller than or equal to the shortest distance from s to u plus the weight of the edge (u, v). The new weights are w(u, v) + h[u] – h[v]. The value of the new weights must be greater than or equal to zero because of the inequality “h[v] <= h[u] + w(u, v)”. 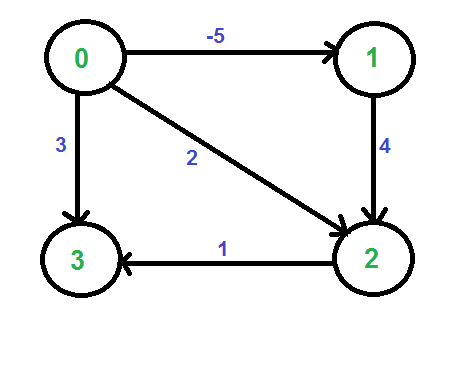 We add a source s and add edges from s to all vertices of the original graph. In the following diagram s is 4. 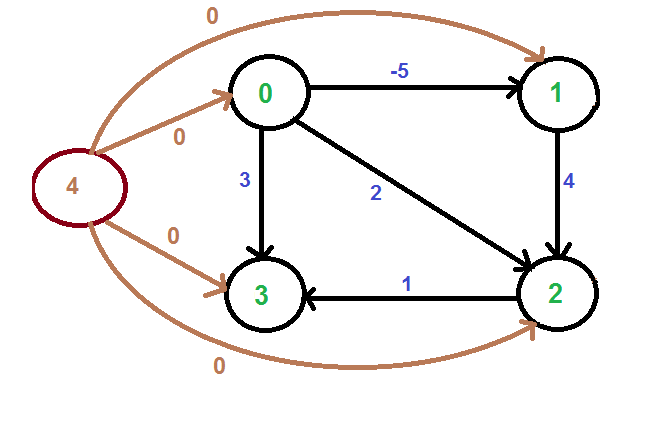 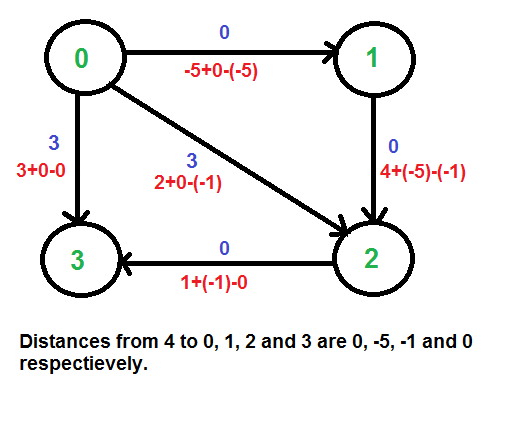 Since all weights are positive now, we can run Dijkstra’s shortest path algorithm for every vertex as the source.

when the graph is complete (For a complete graph E = O(V2). But for sparse graphs, the algorithm performs much better than Floyd Warshall’s Algorithm( https://www.geeksforgeeks.org/floyd-warshall-algorithm-dp-16/?ref=lbp ).