As our systems mature and begin to do more complex calculations, the need for speed grows, and process optimization becomes a need. When we overlook this issue, we end up with applications that take a long time to run and demand a large number of system resources.

In this article, we are going to look at memoization which is one technique that can help us significantly reduce processing time if done the right way.

Memoization: Memoization is a technique for speeding up applications by caching the results of expensive function calls and returning them when the same inputs are used again.

Let us try to understand this by breaking the definition into small parts.

Importance of Memoization: When a function is given in input, it performs the necessary computation and saves the result in a cache before returning the value. If the same input is received again in the future, it will not be necessary to repeat the process. It would simply return the cached answer from the memory. This will result in a large reduction in a code’s execution time.

Memoization in Javascript: In JavaScript, the concept of memorization is based mostly on two ideas. They are as follows:

Closures: Before talking about closure, let’s take a quick look at the concept of lexical scope in JavaScript. Lexical scoping defines the scope of a variable by the position of that variable declared in the source code.


In the above code:


Now let’s modify this salutation() function and rather than invoking the function greet(), we return the greet() function object.


If we run this code, we will get the same output as before. However, it’s worth noting that a local variable is generally only present during the function’s execution. It means that when salutation() execution is completed, the name variable is no longer accessible. In this case, when we execute wish(), the reference to greet(), the name variable still exists. A closure is a function that preserves the outer scope in its inner scope.

Now, using the famous Fibonacci sequence, let’s examine how memoization makes use of these concepts.

Fibonacci Sequence: The Fibonacci sequence is a series of numbers that begins with one and ends with one, following the rule that each number (called a Fibonacci number) is equal to the sum of the two numbers before it.

A simple recursive solution to this problem would be:


If we were to plot the recursion tree for the above function when n=4, it would look like this,

As you may notice, there are too many redundant computations.

Let’s try to fix this with memoization.


We change the function in the code sample above to accept an optional argument called cache. We use the cache object as a temporary memory to store Fibonacci numbers with their associated indices as keys, which can then be retrieved as needed later in the execution. 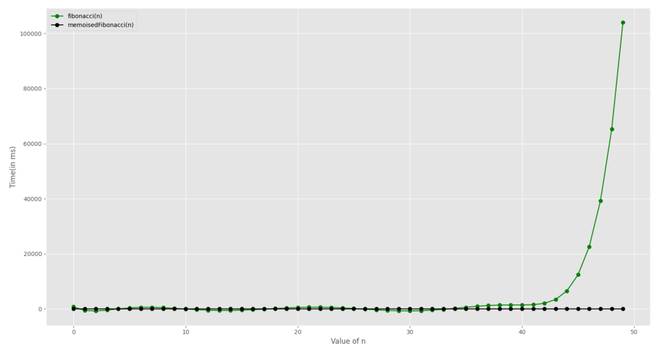 If we plot the execution time, for both versions of the Fibonacci function, it is quite evident that the employment of the memoization technique leads to significant time reduction.

Practical Example: Javascript Memoization for a Web Response: To demonstrate this, we’ll use an example Idioms API. It is a simple REST API built using Node.js.

Response times before Memoization: Following is a simple Express.js route that returns all of the idioms stored within the API. In this situation, each call will result in a database query.


Let’s have a look at how long it takes for this approach to respond. I ran a quick load test using the Vegeta load testing tool.

Response times after Memoization: Now let’s modify the above code to add memoization. For the purposes of this illustration, I’ve used the p-memoize package.

When compared to the previous graph, we can observe that the Express.js route that uses memoization is significantly faster than the non-memoize equivalent.