The Vector class implements a growable array of objects. Vectors fall in legacy classes, but now it is fully compatible with collections. It is found in java.util package and implement the List interface, so we can use all the methods of the List interface as shown below as follows: 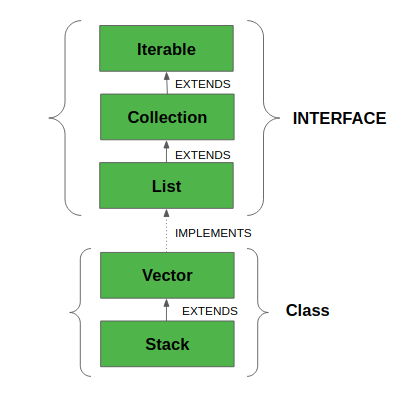 Here, E is the type of element.

Important points regarding the Increment of vector capacity are as follows:

Common Errors in the declaration of Vectors are as follows:

1. Vector(): Creates a default vector of the initial capacity is 10.

2. Vector(int size): Creates a vector whose initial capacity is specified by size.

3. Vector(int size, int incr): Creates a vector whose initial capacity is specified by size and increment is specified by incr. It specifies the number of elements to allocate each time a vector is resized upward.

4. Vector(Collection c): Creates a vector that contains the elements of collection c.

Let us first discuss and implement how to create and use a Vector prior to landing upon the methods of this class.

Let us discuss various operations on Vector class that are listed as follows:

In order to add the elements to the Vector, we use the add() method. This method is overloaded to perform multiple operations based on different parameters. They are listed below as follows:

In order to remove an element from a Vector, we can use the remove() method. This method is overloaded to perform multiple operations based on different parameters. They are:

There are multiple ways to iterate through the Vector. The most famous ways are by using the basic for loop in combination with a get() method to get the element at a specific index and the advanced for a loop.

Note: Do give a read to the ArrayList vs Vector class in Java to grasp it better.