String is a sequence of characters, which is widely used in Java Programming. In the Java programming language, strings are objects. In Java, the virtual machine may only create a single String instance in memory, if we use the same string in other string variable declarations. Let us consider illustrations for the sake of understanding which is as follows: 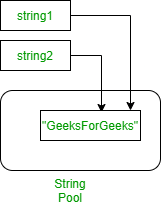 The string literal thus becomes a de facto constant or singleton. More precisely in java, objects representing Java String literals are obtained from a constant String pool which is internally kept by a java virtual machine. This means, that even classes from different projects compiled separately, but which are used in the same application may share constant String objects. The sharing happens at runtime and hence it is not a compile-time feature.

Illustration 2: If we want those two string variables point to separate String objects then we use the new operator as follows:

The above code will create two different memory objects in memory to represent them even if the value of two strings is the same. The image below depicts the use of new operator: 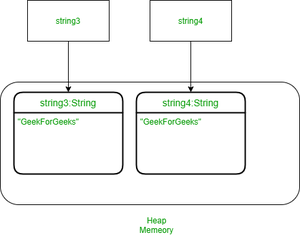 Note: From the image above it is clearly depicted that two different memory blocks are created for two different string which contains same value string.

In the above program, a total of 3 objects will be created. Now, if we want to compare 2 string contents, we can use the equals method, and ‘==’ operator can be used to compare whether two string references are the same or not.