Hence, this algorithm provides a little speed over the Boyer’s one. Both Good suffixes and Two character Bad shifts can be used together in the code to give an extra edge in the performance of the Algorithm. We are discussing the idea of how to change the calculation of Bad Character Shifts for this algorithm and the idea of Good suffixes can be derived from Boyer’s algorithm.

So the comparison should begin at the index of ‘C’ in string i.e. 2 (0-based indexing is used). So comparison starts at index = Length of Pattern – 1. If a match is found then the index is decremented till the matches are found. Once the match is not found then it’s time to make shifts for Bad Characters.

Computing table for Bad Character Shifts (named ZTBC Table): This stage is a preprocessing stage i.e. should be done before starting the comparisons. Bad Character tables is a Hash Map which has all alphabets of Pattern as the keys and the value represents the number of shift the pattern should be given so that either:

Procedure: Logic building. The idea for computing the table is as depicted below:

The table is made using a 2D Array where all the columns and rows are named by the character of the Patterns. The table is initialized with the length of the pattern since if the pair of char is not found in the pattern then the only way is to pass the whole pattern through pass the mismatched character.

Now if both characters are found consecutively in the pattern then we should shift the pattern only that much so that the pair of chars in string and pattern matches so.

Hence, suppose a string and pattern is given as below:

It is descriptively shown with the help of visual arts below as follows: 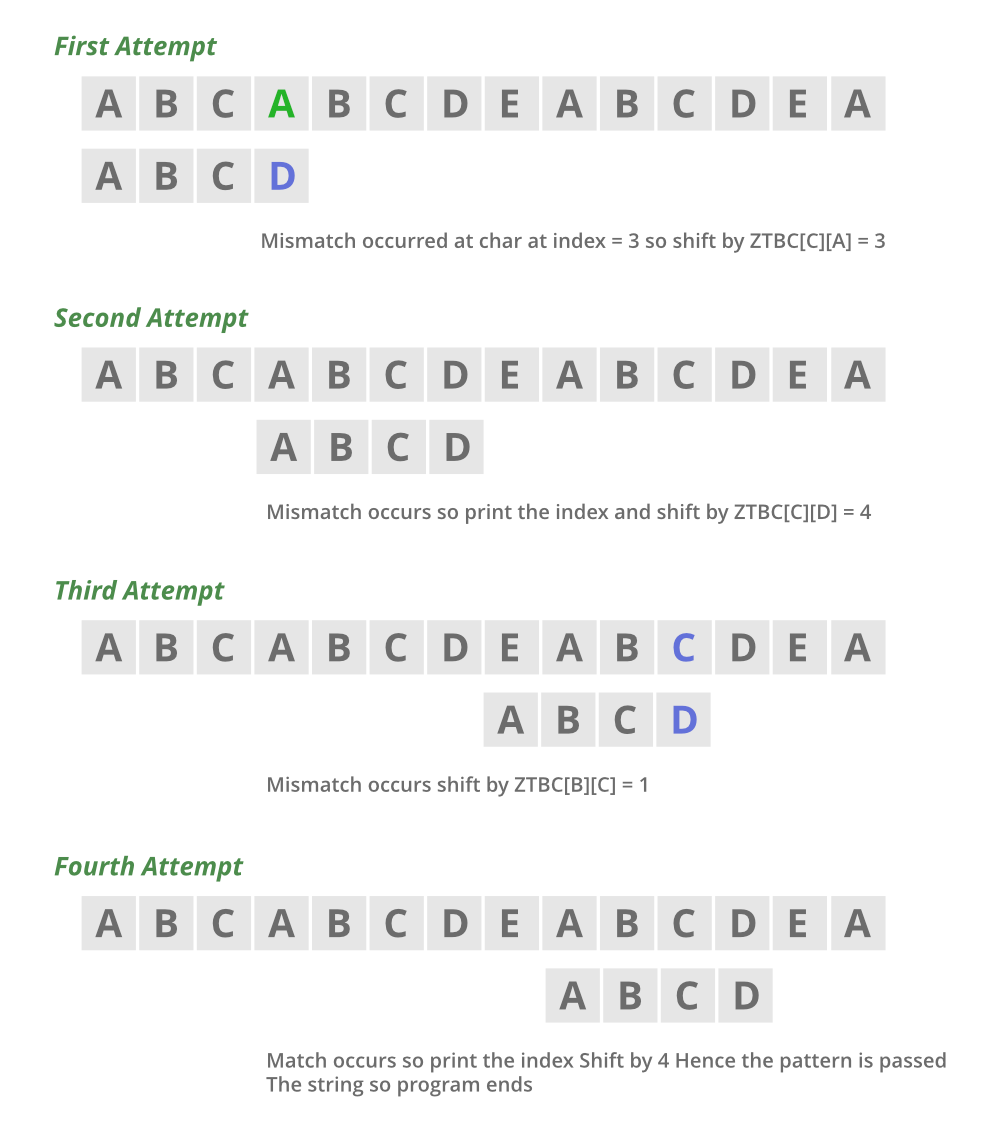 So considering 0-Based indexing, we will begin at index 3

Hence, a mismatch occurs, and we will shift the array by

So now we will shift the pattern by 3

And now we should again start a comparison of the string and pattern as in step 1, and then we would found a match of pattern in the string so print it. We found one occurrence. Now since continuing further, we should now shift by the last two char i.e. CD in String since they are only at the previous index. Hence, we should shift our pattern by 1 and continue the same process. Also, we can include the idea of Good Suffixes in this program to find the max number of shifts necessary and hence make our code’s performance better. The idea of Good Suffixes is the same as that in Boyer’s one. Hence, presenting a general formula for the above shifting idea we get If a mismatch occurs at Char of String. Say

Then the number of the shift should be given as: