A Java Cursor is an Iterator, which is used to iterate or traverse or retrieve a Collection or Stream object’s elements one by one. There are three cursors in Java.

Note: SplitIterator can also be considered as a cursor as it is a type of Iterator only. 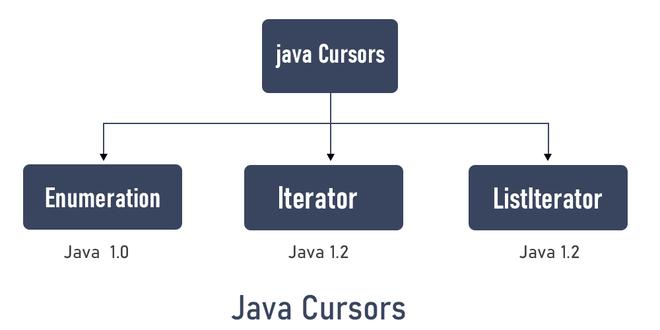 Iterators in Java are used in the Collection framework to retrieve elements one by one. It is a universal iterator as we can apply it to any Collection object. By using Iterator, we can perform both read and remove operations. It is an improved version of Enumeration with the additional functionality of removing an element.

Note: Here “c” is any Collection object. itr is of type Iterator interface and refers to “c”.

Methods of Iterator Interface in Java

1. hasNext(): Returns true if the iteration has more elements.

2. next(): Returns the next element in the iteration. It throws NoSuchElementException if no more element is present.

3. remove(): Removes the next element in the iteration. This method can be called only once per call to next().

How does Java Iterator Works Internally?

In this section, we will try to understand how Java Iterator and its methods work internally. Let us take the following LinkedList object to understand this functionality.

Now, let us create an Iterator object on List object as shown below:

Here Iterator’s Cursor is pointing before the first element of the List.

Now, we will run the following code snippet.

When we run the above code snippet, Iterator’s Cursor points to the first element in the list as shown in the above diagram.

Now, we will run the following code snippet.

After reading the final element, if we run the below code snippet, it returns a “false” value.

As Iterator’s Cursor points to the after the final element of the List, hasNext() method returns a false value.

Note: After observing all these diagrams, we can say that Java Iterator supports only Forward Direction Iteration as shown in the below diagram. So it is also known as Uni-Directional Cursor.

Spliterators, like other Iterators, are for traversing the elements of a source. A source can be a Collection, an IO channel, or a generator function. It is included in JDK 8 for support of efficient parallel traversal(parallel programming) in addition to sequential traversal. Java Spliterator interface is an internal iterator that breaks the stream into smaller parts. These smaller parts can be processed in parallel.

Note: In real life programming, we may never need to use Spliterator directly. Under normal operations, it will behave exactly the same as Java Iterator.

Also, there are certain limitations of Iterator which are listed as follows:

It is an interface used to get elements of legacy collections(Vector, Hashtable). Enumeration is the first iterator present from JDK 1.0, rests are included in JDK 1.2 with more functionality. Enumerations are also used to specify the input streams to a SequenceInputStream. We can create an Enumeration object by calling elements() method of vector class on any vector object

There are two methods in the Enumeration interface namely :

1. public boolean hasMoreElements(): This method tests if this enumeration contains more elements or not.

2. public Object nextElement(): This method returns the next element of this enumeration. It throws NoSuchElementException if no more element is present

There are certain limitations of enumeration which are as follows:

Similarities between Java Enumeration and Iterator

Differences between Java Enumeration and Iterator

The following table describes the differences between Java Enumeration and Iterator:

It is only applicable for List collection implemented classes like ArrayList, LinkedList, etc. It provides bi-directional iteration. ListIterator must be used when we want to enumerate elements of List. This cursor has more functionality(methods) than iterator. ListIterator object can be created by calling listIterator() method present in the List interface.

1.1 hasNext(): Returns true if the iteration has more elements

1.2 next(): Same as next() method of Iterator. Returns the next element in the iteration.

2.1 hasPrevious(): Returns true if the iteration has more elements while traversing backward.

2.2 previous(): Returns the previous element in the iteration and can throw NoSuchElementException if no more element present.

2.3 previousIndex(): Returns the previous element index or -1 if the list iterator is at the beginning of the list,

3.1 remove(): Same as remove() method of Iterator. Removes the next element in the iteration.

3.2 set(Object obj): Replaces the last element returned by next() or previous() with the specified element.

3.3 add(Object obj): Inserts the specified element into the list at the position before the element that would be returned by next()

Clearly, the three methods that ListIterator inherits from Iterator (hasNext(), next(), and remove()) do exactly the same thing in both interfaces. The hasPrevious() and the previous operations are exact analogues of hasNext() and next(). The former operations refer to the element before the (implicit) cursor, whereas the latter refers to the element after the cursor. The previous operation moves the cursor backward, whereas the next moves it forward.

Note: Similarly, there are certain limitations with ListIterator. It is the most powerful iterator but it is only applicable for List implemented classes, so it is not a universal iterator.

Note: The $ symbol in reference class name is a proof that concept of inner classes is used and these class objects are created.

This can be verified by the below code. For more on inner class refer