Issues Related to Urbanization in India

Urbanization is a process of society’s transformation from a predominantly rural to a predominantly urban population. People move to urban areas in search of better job opportunities, health facilities, studies, and better growth in their life. It leads to an increase in the number of people living in urban settlements and an increase in the percentage of people engaged in non-agricultural activities. In India, over 35% of the population lives in urban areas, which is around 48 crore people and is increasing by 2.34% every year, and by 2030, over 50 per cent of India’s population is expected to live in urban areas. Public utilities like housing, sanitation, transport, electricity, water, health, and education are under heavy pressure because of Urbanization. However, urbanization has been an instrument of social, economic, and political progress, it has led to serious socioeconomic problems like poverty, unemployment, underemployment among the rural immigrants, thefts, dacoities, burglaries, beggary, and other social evils. 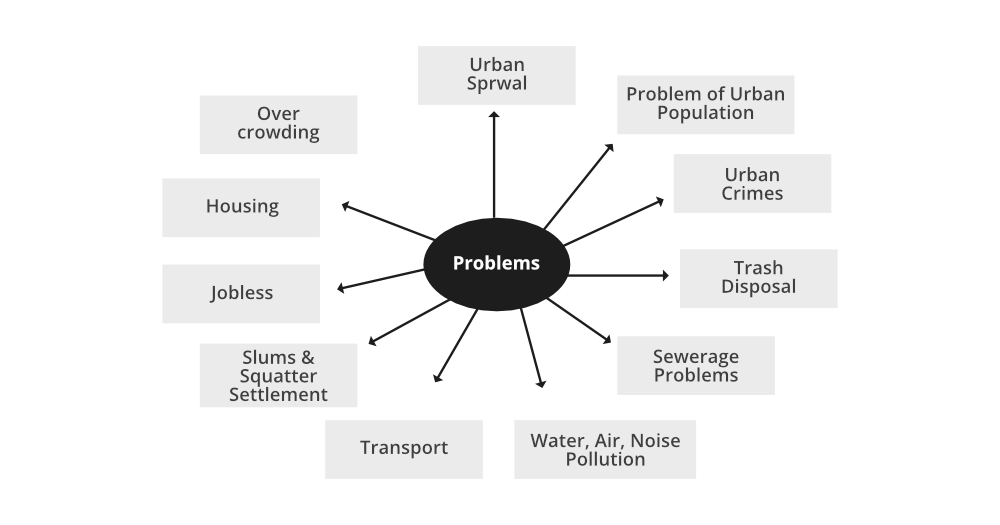 Major Issues Related to Urbanization are:

Overcrowding is the condition in which more people are located within a given space than is considered tolerable from a safety and health perspective. It is caused by over migration in urban areas which leads to cities growing in population and getting crammed when it gets beyond its capacity. In this situation, people tend to compete over the limited and scarce resources such as electricity, water, transport, etc.  According to United Nations, the urban population of the world has grown from 751 million in 1950 to 4.2 billion in 2018. In India, many metropolitan cities like Delhi, Mumbai, Bangalore are suffering from the problem of overcrowding.

Urbanization also leads to the problem of unemployment. People move to urban areas in the hope of a better standard of living, job opportunities, and better healthcare and as the number of people grows in the city, the jobs become harder to find and retain. Urban unemployment in India is estimated at 15 to 25 per cent of the labour force and a big percentage of youth who are unemployed belong to well raised and educated families. According to National Statistical Office (NSO), India’s unemployment rate is 9.3% in urban areas in 2021.

Urban areas tend to have a high cost of living but most of the people who move from rural to urban areas are not in a condition to afford such living. This situation leads to the growth of slums as safe havens for those who cannot afford the high costs of rent and lack substantial money to purchase apartments in urban areas. According to the World Bank, the population living in slums in India was reported at 35.2 % of the total urban population in 2018,  The slums are characterized by substandard housing, overcrowding, lack of electrification, sanitation, ventilation, roads, and drinking water facilities and generally build on underdeveloped or undervalued land. They are the breeding ground of diseases, environmental pollution, crime, demoralization, and many social tensions. Dharavi in Mumbai is considered the largest slum in Asia.

Urbanization is one of the major causes of environmental degradation. The congestion of people in limited spaces reduces the quality of air and contaminates water. With the increasing population in cities, there is great demand for facilities such as housing, food, water, transportation, etc. Destruction of forests and agricultural land for the construction of buildings and factories degrades the land quality. Domestic waste, industrial effluents, and other wastes that were directly channelized to the rivers, degrade the water quality. Increasing population and their need to commute from one place to another increase the demand for private vehicles, most of these vehicles run on fossil fuels, which on burning causes immense amounts of air pollution and degrades the quality of the air. The noise pollution is produced from large industries and factories which ultimately affect human health.

The health conditions of urban poor people in some areas are more adverse compared to rural areas. In cities, many people lose their life due to a lack of basic amenities like drinking water, clean air, etc.  As many as 20 million children in developing countries are dying as a result of drinking water. In cities, people are often diagnosed with diseases like allergies, asthma, infertility, food poisoning, cardiovascular complications, respiratory failure, cancer, and death. About 6,00,000 persons are losing their lives on account of indoor and outdoor air pollution and water pollution.

Transport problems have increased and become more complex as the town grows in size. Today almost all cities of India are suffering from an acute form of transport problem. The insufficient road infrastructure leads to capacity overloading and causes problems such as road accidents, traffic jams, etc. The inefficient and over-congested public transportation system has further accentuated the problem.

Rapid urbanization leads to the unplanned and haphazard growth of cities and most of these cities are plagued with inefficient sewage facilities. Not a single city in India has a fully developed sewage system. Most cities do not have proper arrangements for treating the sewage waste and it is drained directly into a nearby river or in the sea. Such practice is common in Delhi, Mumbai, and other metropolitan cities. According to GOI almost 78 per cent of the sewage generated in India remains untreated and is disposed of in rivers, lakes, or sea.

The rampant growth of the population in urban areas makes water a very scarce resource and water supply becomes strained and inadequate to meet the demands of the large population. The water problems have worsened with the increase in water pollution because of poor sewerage systems and a lack of preventive measures for managing local water pollution. Today we have reached a stage where no city in India gets sufficient water to meet the daily needs of city dwellers. According to a report published by WWF, 30 Indian cities would face a grave water risk by 2050 due to sharp increases in urban population.

Mountains of garbage outside the city area have become the hallmark of any metropolitan city in India. These cities produce a lot of waste daily, moreover, these cities do not have proper arrangements for garbage disposal and the existing landfills are full to the brim that they cannot accommodate more trash, this subjects the people living in such areas to multiple health risks like dysentery, malaria, plague, jaundice, diarrhoea, typhoid, etc. These landfills are hotbeds of disease and innumerable poisons leaking into their surroundings causing air and water pollution.

With the increase in urbanization, the problem of crime also increases. Fringe areas of most cities are the breeding ground for crimes. Many poor people who migrate to cities, for better opportunities, often indulge in crime to meet their daily needs. Not only the poor or slum dwellers; youngsters from well-to-do families also resort to crime in order to make a fast buck and to meet their requirements of a lavish life. Sometimes youngsters also drag to crime facing failure in their life. The increasing crime rate tends to upset the peace and tranquillity of the cities and make them insecure for living, mainly for women. Metropolitan cities like Delhi, Mumbai, and Bengaluru have accounted for 16.2, 9.5, and 8.1 per cent respectively of the total crime reported from 35 megacities of India.

To conclude, urbanization is not a problem in itself, but unsustainable and unplanned urbanization is bound to create socio-economic problems. These problems need to be countered in a planned and scientific manner although they cannot be completely solved. Urbanization is good for the financial growth of a country but careful planning is required to develop cities and offer basic amenities for healthy living. Society should work together with the authorities to make urbanization a better phenomenon.