Some examples of Coordinate compounds are:

Isomers are two or more compounds with the same chemical formula but a different atomic arrangement. They differ in one or more physical or chemical properties due to the different arrangements of atoms. Among coordination compounds, there are two major types of isomerism.

Stereoisomers have the same chemical formula and chemical bonds, but their spatial arrangement is different.

Because of the various geometric arrangements of the ligands, this type of isomerism occurs in heteroleptic complexes. Coordination numbers 4 and 6 provide notable examples of this behavior. The two ligands X in a square planar complex of formula [MX2L2] (X and L are unidentate) can be arranged adjacent to each other in a cis isomer or opposite to each other in a trans isomer. 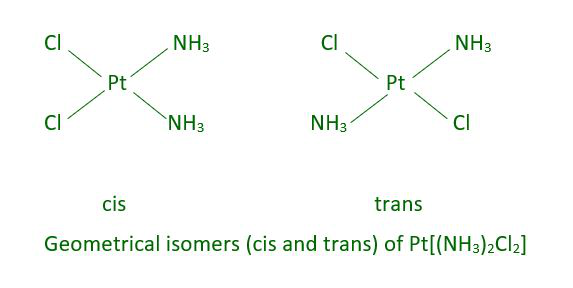 Other square planar complexes of the type MABXL (where M is metal and A, B, X, L are unidentified ligands) exhibit three isomers-two cis and one trans. Such isomerism is not possible for a tetrahedral geometry but similar behavior is possible in octahedral complexes of formula [MX2L4] ] in which the two ligands X may be oriented cis or trans to each other. 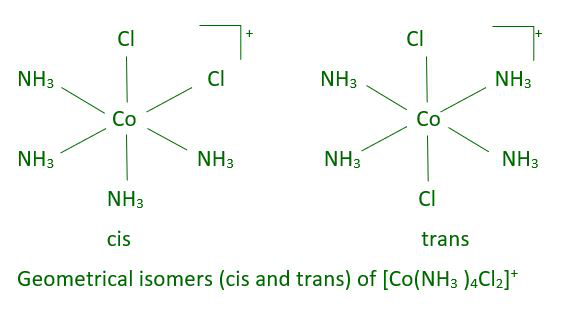 This type of isomerism is also known as geometrical isomerism when didentate ligands L – L [e.g., NH2CH2CH2NH2 (en)] are present in complexes of the formula [MX2 (L– L)2]. 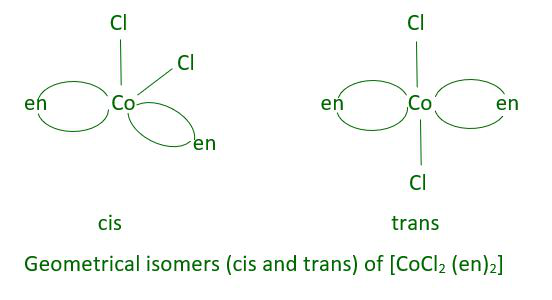 Another type of geometrical isomerism occurs in octahedral coordination entities of the type [Ma3b3] like [Co(NH3 )3 (NO2 )3 ]. The facial (fac) isomer is formed when three donor atoms of the same ligand occupy adjacent positions at the corners of an octahedral face. The meridional (mer) isomer is obtained when the positions are centered on the octahedron’s meridian. 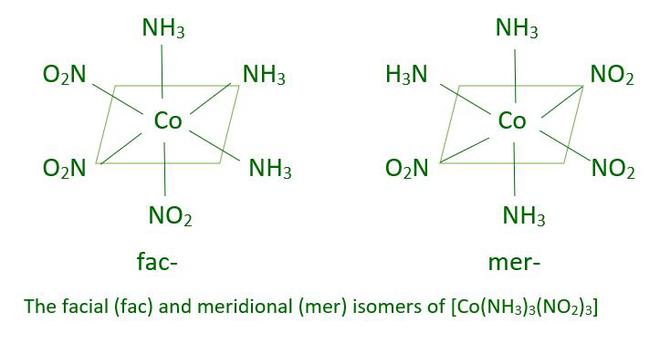 Mirror images that cannot be superimposed on one another are optical isomers. These are referred to as enantiomers. Chiral molecules or ions are those that cannot be superimposed. The two forms are called dextro (d) and laevo (l) depending upon the direction they rotate the plane of polarized light in a polarimeter (d rotates to the right, l to the left). In octahedral complexes containing didentate ligands, optical isomerism is common. 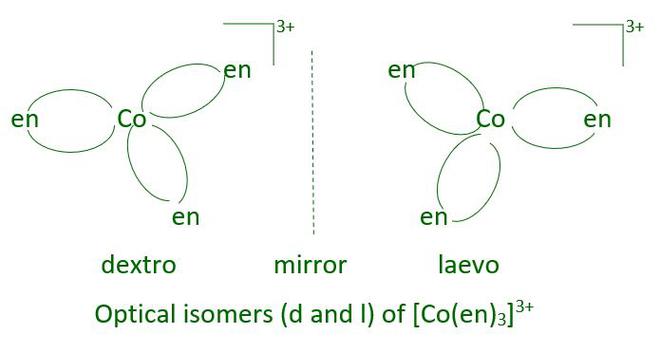 In a coordination entity of the type [PtCl2 (en)2 ]2+, only the cis-isomer shows optical activity. 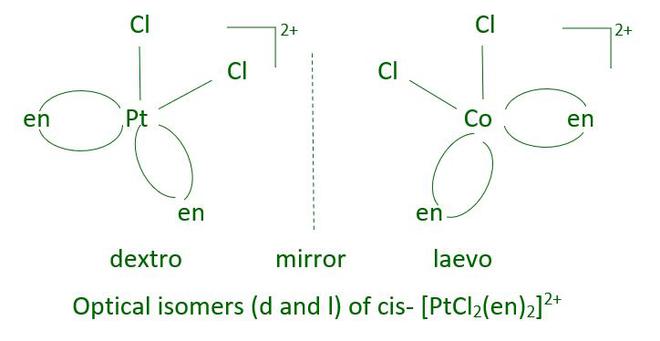 Solvate isomerism is known as ‘hydrate isomerism’ in this isomerism water is involved as a solvent. This is similar to ionisation isomerism. The difference between sulphate isomers is whether the solvent molecule is directly bonded to the metal ion or is present in the crystal lattice as free solvent molecules. The aqua complex [Cr(H2O)6]Cl3 (violet) and its solvate isomer [Cr(H2O)5Cl]Cl2.H2O are two examples (grey-green). 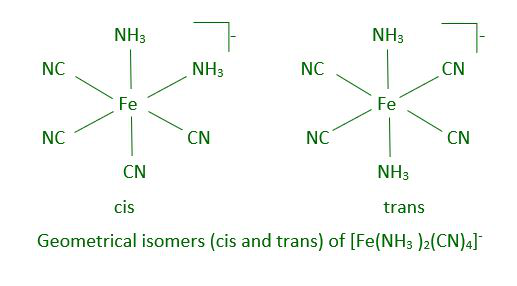 Question 2: Indicate the types of isomerism exhibited by the following complexes

Question 3: How many geometrical isomer will possible in [Co(NH3)3(Cl)3]?

Question 4: What are ligands in coordination compounds?