Hydrogen is just one proton and one electron, it is the most common element making up 75% of the mass of the entire universe. On Earth, it is rarely in a naturally free state due to its reactive nature. Hydrogen was first discovered by English scientist Henry Cavendish in 1766. When we combine metal and acid then hydrogen gas is formed.

Iodine is an essential micronutrient. It was discovered by Courtois who is a Frenchmen in 1811. It is necessary for the synthesis of thyroid hormones and thyroxine which is essential for the metabolism, growth, development, and well-being of human beings. There are various sources of iodine like food and water. The rich and best sources of iodine are crab, vegetables, and seafood.

Oxygen is one of the main gases present in Earth’s atmosphere. The amount of oxygen gas present in the atmosphere is 21%. It is colorless, tasteless, and odorless gas. It is very important for survival. Almost all organisms need oxygen to survive. It is also required for creating energy. It was discovered by Carl Wilhelm Scheele in 1772 who is a Swedish Chemist.

Iodic Acid is a compound that is a white water-soluble solid. It has features of iodine within oxidation number +5. It is a conjugate acid. It is also called monoiodic acid, trioxoiodic acid, hydrogen trioxoiodate acid. Iodic acid is discovered by physicist Jabir ibn Hayyan in the eighth century. It contains hydrogen and iodate ions. It is also an acid. It plays a role as an astringent. 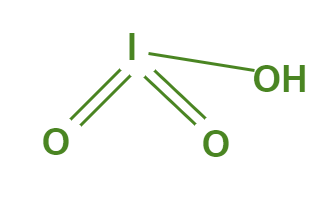 Oxidation of iodine I2 with strong oxidizing agents such as aqua fortis, chlorine, hydrochloric acid, or peroxide to produce acid. Reactions are as follows,

Another way to get it is to treat hydroiodic acid with a base,

The important physical properties of iodic acid are

The reduction of iodine occurs if there are plenty of iodic acids. It is a strong acid with pKa 0.75. It is strong oxidizing in acidic solution but less in basic solution. It is reduced to iodine trichloride. It is a golden yellow compound in solution and no reduction occurs. When there is an excess of iodine then iodate is converted to iodine. it dissolves acids within the minimum volume of hot dilute HNO3 and we filter it and evaporate it until crystals form. Collect crystals and wash them with H2O and dry them in the air in dark.

Question 2: Where is iodic acid found?

Iodic acid appears in early fall. It is formed when oxygen atoms bind to iodine molecules, a process known as oxidation. Some studies have shown that tiny algae below sea ice produce iodine that is then transported via brine channels or cracks to the atmosphere.

Hence HI is a stronger acid than HCl. Here in HI, Iodine has the largest size, thus the weakest bond with Hydrogen and hence the largest acidity. The size of the anions increases does the group and hence the order is HF < HCl < HBr < HI.

Question 4: Is there an acid that eats everything?

Its name is hydrofluoric acid. Hydrofluoric acid has the chemical formula HF, but unlike HCl you won’t find this one in a school laboratory, and if it turns up in your stomach you’re in very big trouble.

Question 5: Can acid eat through glass?

Acid can dissolve glass. However, only a few acids, mainly acids containing the element fluorine, are corrosive enough to properly dissolve glass. An example of this is hydrofluoric acid, which is able to react with the compound silicon dioxide found in glass, thus dissolving it.

Question 6: What type of acid is iodic acid?

Iodic acid is a conjugate acid and is iodine oxoacid. It is soluble in water and exists in a pure state. Iodic acid can be obtained by oxidizing iodine with strong oxidizers like nitric acid, chlorine.

Question 7: What is the anion name for iodic acid?