Introduction to Pandas in Python

Pandas is an open-source library that is made mainly for working with relational or labeled data both easily and intuitively. It provides various data structures and operations for manipulating numerical data and time series. This library is built on top of the NumPy library. Pandas is fast and it has high performance & productivity for users.

History: Pandas were initially developed by Wes McKinney in 2008 while he was working at AQR Capital Management. He convinced the AQR to allow him to open source the Pandas. Another AQR employee, Chang She, joined as the second major contributor to the library in 2012. Over time many versions of pandas have been released. The latest version of the pandas is 1.5.2, released on Nov 22, 2022.

The first step of working in pandas is to ensure whether it is installed in the Python folder or not.  If not then we need to install it in our system using pip command. Type cmd command in the search box and locate the folder using cd command where python-pip file has been installed.  After locating it, type the command:

After the pandas have been installed into the system, you need to import the library. This module is generally imported as:

Here, pd is referred to as an alias to the Pandas. However, it is not necessary to import the library using the alias, it just helps in writing less amount code every time a method or property is called.

Series: Pandas Series is a one-dimensional labeled array capable of holding data of any type (integer, string, float, python objects, etc.). The axis labels are collectively called indexes. Pandas Series is nothing but a column in an excel sheet. Labels need not be unique but must be a hashable type. The object supports both integer and label-based indexing and provides a host of methods for performing operations involving the index.

In the real world, a Pandas Series will be created by loading the datasets from existing storage, storage can be SQL Database, CSV file, an Excel file. Pandas Series can be created from the lists, dictionary, and from a scalar value etc.

Note: For more information, refer to Creating a Pandas Series 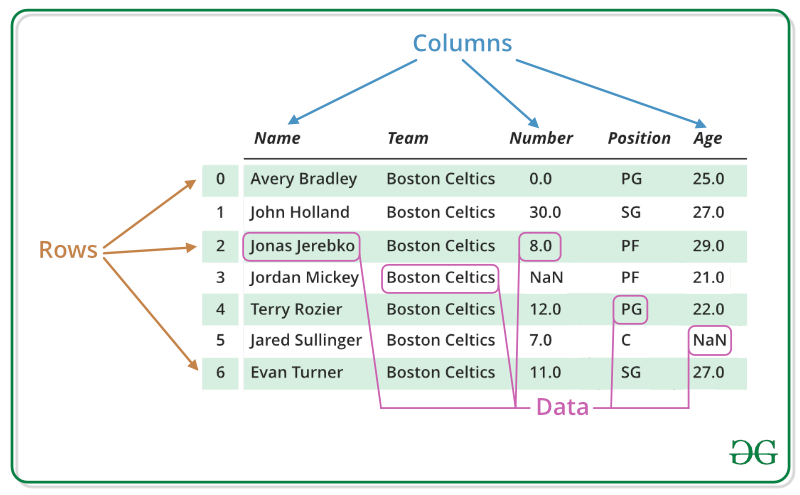 Note: For more information, refer to Creating a Pandas DataFrame

Why Pandas is used for Data Science

Pandas are generally used for data science but have you wondered why? This is because pandas are used in conjunction with other libraries that are used for data science. It is built on the top of the NumPy library which means that a lot of structures of NumPy are used or replicated in Pandas. The data produced by Pandas are often used as input for plotting functions of Matplotlib, statistical analysis in SciPy, and machine learning algorithms in Scikit-learn.
Pandas program can be run from any text editor but it is recommended to use Jupyter Notebook for this as Jupyter given the ability to execute code in a particular cell rather than executing the entire file. Jupyter also provides an easy way to visualize pandas data frames and plots.