Economy is a system providing individuals with the means to work and earn a living to satisfy their needs and wants. They can do so through the process of manufacturing, consumption, investment, and exchange.

Economic problem is the problem of choosing from among different options that arise because of three major reasons limited resources, unlimited human wants, and alternative use of the limited resources. 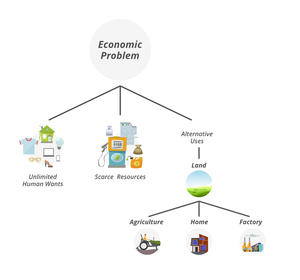 Economics is the study of a way in which a society decides or chooses to use the limited resources with alternate uses for the production of goods and services and to ultimately distribute the produce among different sections of the society. Simply put, economics is about choosing among different alternatives in the presence of scarcity.

Positive economics is the study of the facts of life. It means that it deals with the real life economic problems as they are and how these problems are solved.

However, normative economics deals with finding out solutions to economic problems. Simply put, it answers the question ‘what ought to be done.’

The term ‘macros’ in macroeconomics is derived from the Greek word ‘makros’ meaning ‘large.’ Macroeconomics is the study of the economy as a whole. It means that in macroeconomics, we study the behavior and choices made by the whole economy with the changes in different aspects of goods and services in an economy. Hence, its main focus is on the aggregate growth and correlation of an economy. The major components of macroeconomics are unemployment, inflation, and national output. It helps in determining how to achieve equilibrium in the income and employment level of a country. For example, general price level, poverty, rate of unemployment, national income, aggregate supply, aggregate demand, etc.

Central Problems of an Economy

As discussed earlier, an economic problem is a problem of choosing among different alternatives because of the limited resources, unlimited human wants, and alternative uses. The three central problems of an economy are What to produce, How to produce, and For whom to produce. 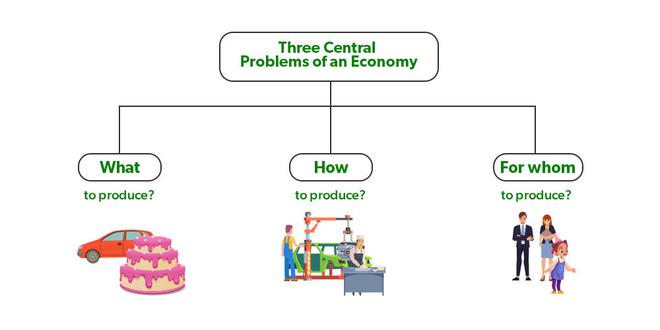 With limited resources, an economy cannot produce all goods and services. It has to choose among the different goods and services. Therefore, the first central problem of an economy includes selecting goods and services to produce and the number of units or quantity of each commodity to be produced. For example, a farmer has to make choice between different crops as to which he should grow on one piece of land. He can decide to grow one crop of the whole land or grow different proportions of more than one crop.

For whom to produce?

The last central problem of an economy after deciding what and how to produce is for whom to produce. As an economy cannot satisfy the needs and wants of every individual of the society, it has to make a decision for who to produce a commodity and service. Simply put, it involves deciding who should get how much of the goods and services, i.e., how much production should be done for the poor and how much for the rich. For example, an organization can decide to produce necessity goods for the poor section of society. However, another firm can decide to produce luxury goods for the rich section of society.

Besides these problems, there are two more problems that arise in underdeveloped countries like India. These are the problems of the growth of resources and the problem of the underutilization of resources.