Introduction to Laravel and MVC Framework

Laravel is a free and open-source web PHP framework, which is based on MVC (Model-View-Controller) architecture.

A Framework provides structure and starting point for creating your application. It helps to provide an amazing developer experience while providing powerful features through dependency.

Laravel Framework is used to develop complex Web Applications. Laravel can help a developer to develop a secure web application. It is a Scalable framework and it also has a wide Community across the world.

Laravel is a Full Stack Framework, Which helps a developer create Full Stack Applications with the help of Laravel.

How to create your first Laravel project:

1. Authentication:  It is a very important part of any web application, to authenticate the user in their system, we need to write so much of the code which consumes a lot of time. But here, Laravel makes it much easier for a developer. The authentication feature was introduced after Laravel 5, where we only need to configure the Model, View, and Controller to use Authentication in our Web Application.

2. Dynamic Template: Laravel provides an innovative template engine called “Blade template“, which allows developers to create a dynamic web page. The blade is a powerful templating engine in a Laravel framework that helps to make Dynamic Template in web Applications.

3. Database Migrations: It is a very useful feature provided by Laravel Framework, Where we can easily share database schema without any extra effort. Migrations are files that contain code to create a database table or make changes in any tables, this files can be used by other team members to make changes in the database by just executing that migration file. It doesn’t have SQL code it just contains PHP code which makes it much easier for any PHP developer to make changes in the Database.

4. MVC Architecture: It divides any application code into 3 parts, which makes code more maintainable and makes modification easier which makes the development process much faster.

6. Security: Web Application Security is also considered to be important while the development cycle. But Laravel provides some feature that makes the application more secure. Laravel provides the feature of the “Bcrypt Hashing Algorithm” which generated hashed passwords and stores them in a Database which makes it almost impossible to resolve passwords.

To understand Laravel more, we need to learn about MVC (Model-View-Controller) structure. 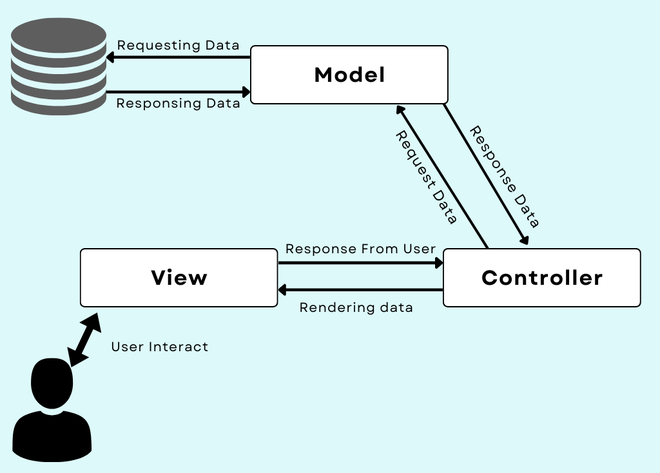 In the above image, we can understand how the MVC framework interacts with the User and the Database.

Model: This component of the MVC framework handles data used in your application. It helps to retrieve the data from the database and then perform some operation that your application is supposed to perform then it stores that data back in the database.

In simple words, we can say that Model is responsible for managing data that is passed between the database and the User Interface (View).

View: This component is User Interface, which defines the template which is sent as a response to the browser. This View components contain the part of code which helps to display data to the  User Interface on the user’s browser. For example, we can say the buttons, textbox, dropdown menu, and many more such widgets on the browser screen are the part of View Component.

Why MVC: It is mainly used to separate Application code into user interfaces, data, and controlling logic. It can benefit the developer to easily maintain the code which can help to make a development process much smoother.

Conclusion: After reading this article and after knowing what is Laravel, the Features of Laravel and its MVC Architecture, and many more such features we can say that Laravel is scalable for a small start-up project as well as for a large-scale project. And it covers every thing which is needed and can be used by a developer while the development process.

Previous
Ember.js Ember.Templates.helpers each-in() Method
Next
Bootstrap 5 Visibility
Related Articles
1. Laravel | Artisan Commands to know in Laravel
2. MVC Framework Introduction
3. Which One is Most Demanding Back-End Web Framework between Laravel , Node.js and Django ?
4. Difference Between Laravel and CodeIgniter Framework in PHP
5. Why CodeIgniter is called a loosely based MVC framework ?
6. MVC Framework Bundling
7. What were the major problems with MVC Framework ?
8. Difference between Server-Side AJAX framework and Client-side AJAX framework ?
9. Laravel | Artisan Console Introduction
10. What are the differences and Similarities Between Lumen and Laravel?
Article Contributed By :