Including documentation in codebase has its own wide range of benefits, some of those include ease of understanding of code to new programmers and also to senior programmers who want to revisit their past codebase, when documenting the code you need to summarize it properly this eventually helps in understanding the whole codebase appropriately.

JSDoc is a documentation generator for Javascript, it’s similar to JavaDoc or Python Docstrings. You need to include documentation comments in your code and then JSDoc will generate an HTML documentation website with help of those comments.

In the “scripts” property of package.json, we will need to add the jsdoc command to run JSDoc and generate documentation, Add the command similar to given below in the package.json file

This command has a -c tag which denotes that jsdoc will run with a custom config file, Hence let’s create a config file for JSDoc.

In the root of your project directory create a file named “jsdoc.json” , add the following code in that file:

Let’s create a file index.js in the src folder and declare a variable in it to generate documentation


Here we have created a string named “siteName”, In the comments, we have a simple description of the variable and @type tag which denotes the type of variable
In VSCode after writing /** the IntelliSense will automatically suggest a JSDoc comment, hit enter, and write the comment as shown below.

Step to run: To run jsdoc open the terminal and write the following command

This command will create a “jsdoc” folder at the root of your project directory and inside it, there will be an index.html file generated, you can open it in a browser to see our generated documentation 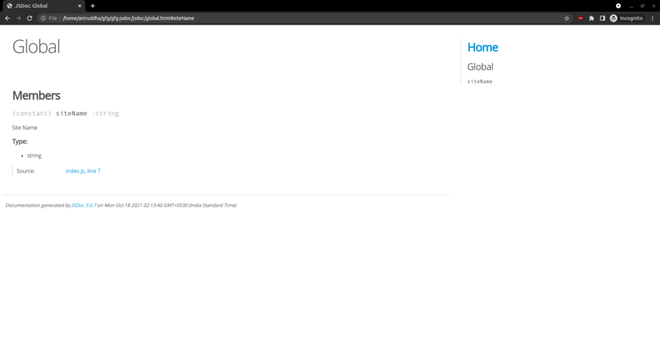