A disjoint-set data structure is defined as a data structure that keeps track of a set of elements partitioned into a number of disjoint (non-overlapping) subsets.

A union-find algorithm is an algorithm that performs two useful operations on such a data structure:

A set is divided into subsets. Each subset contains related elements. If we come to know that the two element ai and aj are related, then we can do the followings:

3. If S, and Si are two independent subsets

This algorithm is dynamic as during the course of the algorithm, the sets can change via the union operation.

Let us check an example to understand how the data structure is applied. For this consider the following problem statement

Problem: Given an undirected graph, the task is to check if the graph contains a cycle or not.

Input: The following is the graph 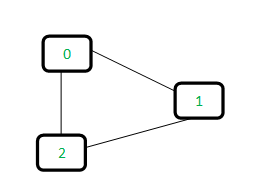 We already have discussed an algorithm to detect cycle in directed graph. Here Union-Find Algorithm can be used to check whether an undirected graph contains cycle or not. The idea is that,

Initially create subsets containing only a single node which are the parent of itself. Now while traversing through the edges, if the two end nodes of the edge belongs to the same set then they form a cycle. Otherwise, perform union to merge the subsets together.

Note: This method assumes that the graph doesn’t contain any self-loops.

Let us consider the following graph:

Use an array to keep track of the subsets and which nodes belong to that subset. Let the array be parent[].

Initially, all slots of parent array are initialized to hold the same values as the node.

Therefore, the above graph contains a cycle.

Note that the implementation of union() and find() is naive and takes O(n) time in the worst case. These methods can be improved to O(logN) using Union by Rank or Height. We will soon be discussing Union by Rank in a separate post.