Histograms are like bar charts that display the frequency (count) of the data using bins. Below is an example of a Histogram plot [Fig 1], showing the count of employees with a monthly salary lying in a particular range. (or in a particular bin) 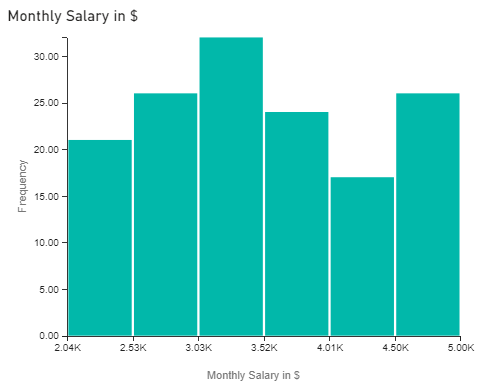 Bi-Histograms are essentially a bi (=2) histogram or a pair of histograms, one above the x-axis and one-below the x-axis, i.e. in opposite direction. [As shown in Fig 2] 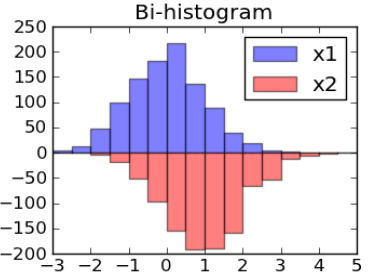 It is used to observe any changes occurring in the two subgroups of data in terms of:

Purpose of the adjoining histograms:

Bi-histograms serve as a great alternative to two-sample t-test as it is a graphical way of representing a variety of features of the subgroups simultaneously on a single plot such as:

There are two adjoining histograms present, one above and one below the x-axis.

Bi-Histogram graph tells if the histograms of the two sub-groups have significant overlap or not. In order to facilitate the comparison of multiple histograms, they are plotted in a matrix format. [As shown in Fig. 3] The rows and columns of this matrix define the variety of classes that gives a different insight into the data (subgroups).

The following details can be observed in the image shown in Fig 3. In the matrix,

In the off-diagonal parts of the matrix,

Bi-Histogram is a powerful statistical tool that serves as a great alternative to a variety of statistical test. It gives a plethora of information related to the location, variation and distribution of the sub-groups, that to in a graphical manner, makes it easier to analyze and interpret. It can be built using Dataplot software.