ANN learning is robust to errors in the training data and has been successfully applied for learning real-valued, discrete-valued, and vector-valued functions containing problems such as interpreting visual scenes, speech recognition, and learning robot control strategies. The study of artificial neural networks (ANNs) has been inspired in part by the observation that biological learning systems are built of very complex webs of interconnected neurons in brains. The human brain contains a densely interconnected network of approximately 10^11-10^12 neurons, each connected neuron, on average connected, to l0^4-10^5 other neurons. So on average human brain takes approximately 10^-1 to make surprisingly complex decisions. ANN systems are motivated to capture this kind of highly parallel computation based on distributed representations. Generally, ANNs are built out of a densely interconnected set of simple units, where each unit takes a number of real-valued inputs and produces a single real-valued output.
But ANNs are less motivated by biological neural systems, there are many complexities to biological neural systems that are not modeled by ANNs. Some of them are shown in the figures.

Difference between the human brain and computers in terms of how information is processed.

The McCulloch-Pitts Model of Neuron:
The early model of an artificial neuron is introduced by Warren McCulloch and Walter Pitts in 1943. The McCulloch-Pitts neural model is also known as linear threshold gate. It is a neuron of a set of inputs I1, I2,…, Im and one output y. The linear threshold gate simply classifies the set of inputs into two different classes. Thus the output y is binary. Such a function can be described mathematically using these equations:

W1,W2,W3….Wn are weight values normalized in the range of either (0,1)or (-1,1) and associated with each input line, Sum is the weighted sum, and is a threshold constant. The function f is a linear step function at the threshold

Single-layer Neural Networks (Perceptrons)
Input is multi-dimensional (i.e. input can be a vector):
input x = ( I1, I2, .., In)
Input nodes (or units) are connected (typically fully) to a node (or multiple nodes) in the next layer. A node in the next layer takes a weighted sum of all its inputs: 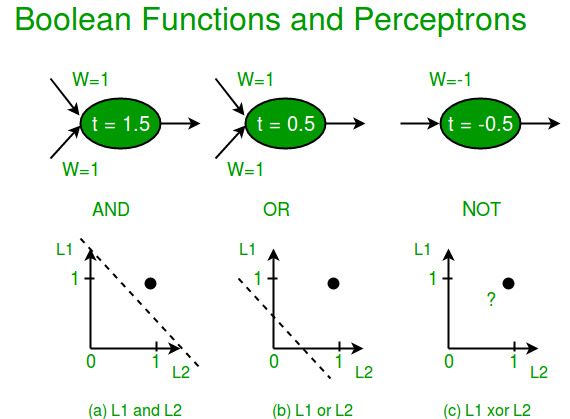 Limitations of Perceptrons:
(i) The output values of a perceptron can take on only one of two values (0 or 1) due to the hard-limit transfer function.
(ii) Perceptrons can only classify linearly separable sets of vectors. If a straight line or a plane can be drawn to separate the input vectors into their correct categories, the input vectors are linearly separable. If the vectors are not linearly separable, learning will never reach a point where all vectors are classified properly
The Boolean function XOR is not linearly separable (Its positive and negative instances cannot be separated by a line or hyperplane). Hence a single layer perceptron can never compute the XOR function. This is a big drawback that once resulted in the stagnation of the field of neural networks. But this has been solved by multi-layer.

This neuron takes as input x1,x2,….,x3 (and a +1 bias term), and outputs f(summed inputs+bias), where f(.) called the activation function. The main function of Bias is to provide every node with a trainable constant value (in addition to the normal inputs that the node receives). Every activation function (or non-linearity) takes a single number and performs a certain fixed mathematical operation on it. There are several activation functions you may encounter in practice:

Sigmoid:takes real-valued input and squashes it to range between 0 and 1.

tanh:takes real-valued input and squashes it to the range [-1, 1 ].

ReLu:ReLu stands for Rectified Linear Units. It takes real-valued input and thresholds it to 0 (replaces negative values to 0 ).