Introduction to Ansible and its Architecture components

In this article, we will discuss the overview of ansible and will mainly focus on its architecture part. Let’s discuss it one by one.

Overview :
Ansible is an IT automation engine that can automate various IT needs. And it has features like application deployment that means you can deploy your application easily as per your requirements, cloud provisioning, configuration management is also the main feature where you can configure and describe your automation job, and intra-service orchestration.  In this, (Yet Another Markup Language)YAML is used for configuring that helps for describing automation jobs as per requirement.  It is Designed for multi-tier deployments, Ansible models the IT infrastructure by describing how various systems interrelate, instead of managing one system at a time. 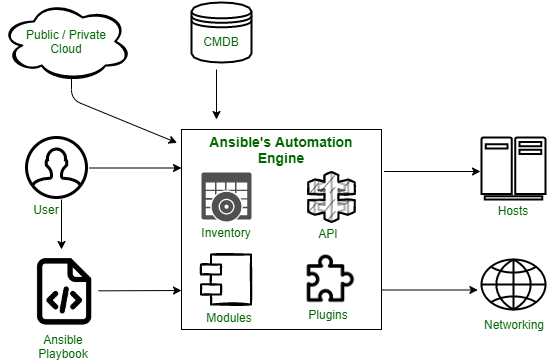