The Android support libraries are used in almost all android applications to overcome the compatibility issues across different Android OS versions and devices. These libraries also facilitate users to add various kinds of updated widgets in the application. Over time, these libraries are updated according to the latest android versions. The problem starts here, the name given to these support libraries are supposed to indicate which Android version is supported by them, for example, com.android.support:support-v7 and com.android.support:support-v13. However, writing version number at the end does not fulfill its purpose because as the libraries have evolved, the minimum version of Android API level increased to 14. Developers also find these names confusing as one cannot say that which all classes are included in a particular library just by looking at its name.

After realizing these challenges faced by the developers, Google launched Android Jetpack in 2018. The existing Support libraries, android architecture components are brought together with an addition of the Android KTX library as a single modular entity and is termed as Android Jetpack. So, Jetpack is nothing but a set of software components, libraries, tools, and guidance to help in developing great Android apps. 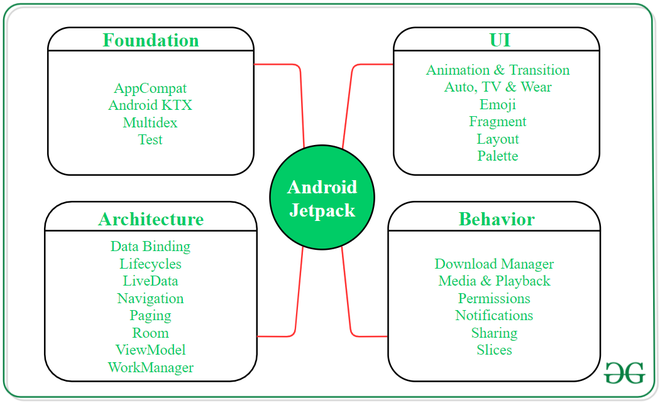 The software components of Android Jetpack has been divided into 4 categories:

These all components consist of a wide collection of libraries that are built in a way to work together and make robust mobile applications. A brief explanation of each component is given below.

The core system components of android apps reside in the Foundation area of Jetpack. Kotlin extension for the language support and Testing libraries are also present in it. Moreover, backward compatibility is provided from the libraries present in this component. Following are the list of all foundation components:

This component of Android Jetpack consists of eight libraries and tools that are responsible for building robust and maintainable applications. This component also helps in the proper management of data used by the app as well as in designing app architecture patterns. Following are the components of this area:

This area of android jetpack covers those libraries that enable users to interact with the application through the UI. This component integrates the standard Android services like notification, downloading, permissions, sharing, assistant, etc. Behavior components are as follows:

It includes widgets, animations, palettes, etc to improve the user experience. It also provides up-to-date emoji fonts to be used in the apps. Following are the libraries included in this component:

What’s new is there in Android Jetpack

Complete Interview Preparation
View Details
System Design-Live Classes for Working Professionals
View Details
Most popular in Android
Most visited in GBlog
We use cookies to ensure you have the best browsing experience on our website. By using our site, you acknowledge that you have read and understood our Cookie Policy & Privacy Policy