Internet of Things (IoT) is a system of interconnected objects, usually called smart devices, through the Internet. The object can be a heart monitor, a remote, or an automobile with built-in sensors. That is objects that have been assigned an IP address and have the capability to collect and transfer data over a network. The objects interact with the external environment with the help of embedded technology, which helps them in taking decisions. Since these devices can now represent themselves digitally.

In other words “The globally ruling technology acts as a single key to shrinking this whole universe to a tiny globally connected village, whereas IoT comprises just two words that precisely depict its definition.” 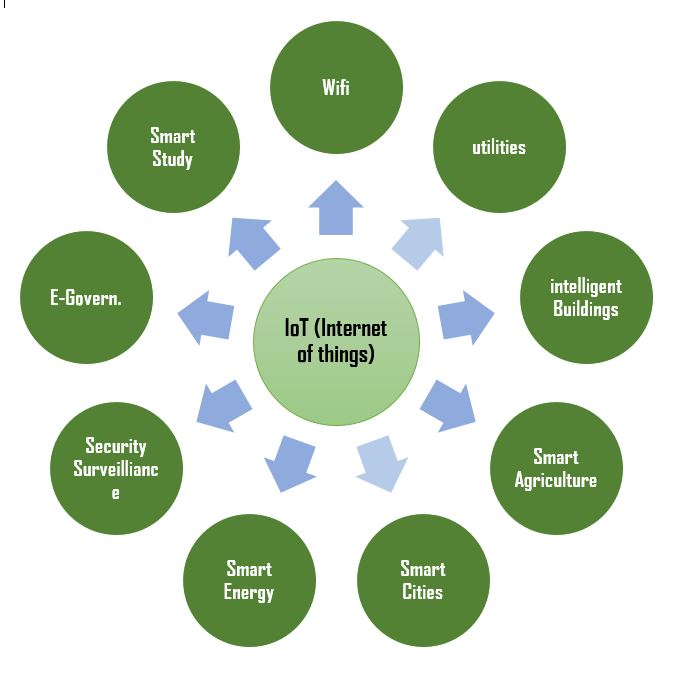 Thus, on the whole, the Internet of Things is the technology that enables everything to communicate by themselves over the internet through devices without the use of computers. Here comes the most essential and prevalent term in IoT called ‘Smart’ which means Automation – the process of decreasing human intervention or involvement thereby increasing the machine intelligence to perform every task by itself, which could be done by IoT.

IoT makes an intertwined network of artificial things like physical devices, vehicles, home appliances and even to connect with natural living beings like plants, animals, and so on. 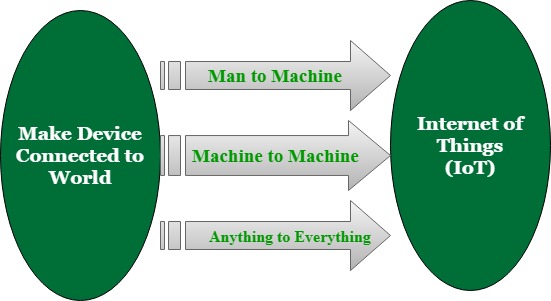 Some communication devices in IoT:

Imagine a scenario of automated monitoring of a farm such that it will just indicate the current situation of crops like “4 crops need water, Now I’m going to pour it” and then it will satisfy the crop’s need.

This wonder is because of the IoT technology behind it,

2. Actuators: Devices which is a contrast to sensors. It transforms electrical signals into physical movements. Both sensors and actuators are transducers that convert one form of energy to another. The exchange of data is the most important key factor in IoT. Hence sensors and actuators play a vital role here.

3. RFID Tags: Wireless microchips are used for automatic unique identification of anything by tagging it over them. You have been seen it in credit cards, automobile ignition keys, and so on.
Since interconnection of things is the main goal of IoT, the RFID tags get hand-shaken with IoT technology and are used to provide the unique id for the connected “things” in IoT.

There are many communication devices and protocols in IoT.

Everyone really has numerous questions circling in mind about – How IoT works? What’s behind IoT? What are all the sources of IoT implementation?

Here we kickstarted few paragraphs on IoT implementation and its working.

Some main reasons to make your project as IoT:

1. First reason: (Real-time data) Yes, it’s really important to know this as the first and foremost step to begin.

Let’s Consider an example: If you are going to make an application where there involves a lot of real-time analysis and immediate actions to be performed based on that real-time data, then you can opt for your choice of making your project as IoT.

Assume that you are running the best hotel full of tastiest foods and your regular customer arriving at 11 p.m. (Hotel’s closing time) has ordered his most favorite dish (naan and paneer butter masala). Unfortunately, the paneer stock had got finished. Thus you are in a situation of rapidly getting and preparing the dish to serve your regular customer. This is the real-time analysis and tackling the situation in a wise manner.

If you wish to lessen the human monitoring and you are most fond of automating everything to make your product/service to be a benchmark, then you can make use of IoT technology.

Consider an example: If you are engaged in a peak tensed work and always entering the home at late night. To solve this, Imagine your air conditioning system automatically turns on before you have entered the home and makes you cool after your arrival. Then after hearing the sound of opening your house door, the radio system plays your most favorite song and lifts you to the comfort zone.

The same example suits the IoT’s technical concept too, consider the smart irrigation system. Assume that it notifies you that “6 crops got the pest attack” (real-time data) so that the action to be performed immediately, hence the fertilizer itself find and spray the crop with the pest attack (automation).

Needs for setting up IoT environment for basic applications

3. Need to use Bluetooth beacons: embedded within the devices to allow IoT objects to broadcast information to the nearby mobile devices so that they can communicate.

Beacon: It’s a kind of lighthouse that repeatedly transmits a single signal to other devices called a Bluetooth radio transmitter.

Summary: Thus on the whole Setting up the IoT environment includes,

Smart City or Smart Home: A smart city or a Smart home both sound like something right out of a science fiction book or a show.
Smart Cities fired up our imagination since the time they were incorporated into the television cartoon The Jetsons. The smart home is supposed to have the following features:-

Smart Lock: A key-less lock that can be unlocked by means of an application that runs on your smartphone.
and many more such devices that can make life around your home much easier.

Now, a smart city shall contain some of these features:

Smart Homes: Smart parking lots- each parking slot shall have an occupancy sensor to sense the presence/absence of a vehicle in that particular slot. A vacant parking space can be chosen by the person wishing to park by simply looking at a mobile application that reflects the status of the parking place smart vehicles smart health, Smart roads, Industrial Automation, Smart retail, and many more…

These are just two of the most common applications of the Internet of things.

What exactly is the Internet of things?

It refers to providing network connectivity & computing capabilities to everyday sensors and objects, allowing them to exchange and consume data without any human intervention or with minimal human interference.
The Internet of things is, thus, a dynamic global network infrastructure with self-configuring capabilities based on standard and interoperable communication protocols where physical and virtual things have identities, physical attributes, and virtual personalities and use intelligent interfaces seamlessly integrated into the information network, often communicate data associated with users and their environment.

The requirements of building an IoT system are as follows:

Dynamic: IoT systems & devices should have the ability to adapt to changes in the operating conditions on the go.

Self-Configuring: This should allow a large number of devices to work together in order to achieve certain functionality.

Should work on interoperable communication protocols in order to facilitate communication between varied devices. Each device in an IoT should have a unique identity that helps in controlling it by means of the Internet Thus, everything that we discussed shall have a sensor built into it (some names reflect it by the word smart attached to them like smart city/smart home).

Smart City and Smart Home are among a few of the revolutionary applications that we can expect out of the Internet of things technology.
Some of the items described above are about to be launched into the market this year by well-known brands. LG is going to launch a new smart fridge ThinQ which can grant us alerts on when the food stored in it is about to go bad by means of virtual stickers and expiry dates. The Government of India has launched a smart city plan in which many of the smart city features mentioned above will be implemented.