Note: Inter-thread communication is also known as Cooperation in Java.

What is Polling, and what are the problems with it?

The process of testing a condition repeatedly till it becomes true is known as polling. Polling is usually implemented with the help of loops to check whether a particular condition is true or not. If it is true, a certain action is taken. This wastes many CPU cycles and makes the implementation inefficient.

For example, in a classic queuing problem where one thread is producing data, and the other is consuming it.

How Java multi-threading tackles this problem?

To avoid polling, Java uses three methods, namely, wait(), notify(), and notifyAll(). All these methods belong to object class as final so that all classes have them. They must be used within a synchronized block only. 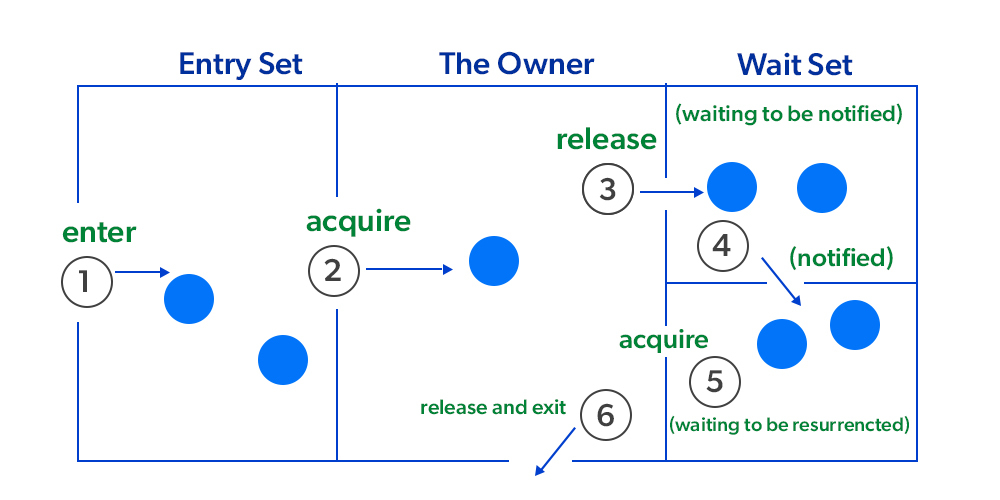 A simple Java program to demonstrate the three methods. Please note that this program might only run in offline IDEs as it contains taking input at several points.

As monstrous as it seems, it is a piece of cake if you go through it twice.

Let’s understand how our produce and consume method works.

If you are still confused as to why we have used notify in consume thread, try removing it and running your program again, as you must have noticed now that the program never terminates.

The reason for this is straightforward. When you called to wait on the produce thread, it went on waiting and never terminated. Since a program runs till all its threads have terminated, it runs on and on.

There is a second way around this problem. You can use a second variant of wait().

This would make the calling thread sleep only for a time specified.

This article is contributed by Rishabh Mahrsee. If you like GeeksforGeeks and would like to contribute, you can also write an article using write.geeksforgeeks.org. See your article appearing on the GeeksforGeeks main page and help other Geeks.