Infrared light for Transmission :
Infrared is the frequency of light that is not visible to the eyes .The frequency of the waves lies between three hundred gigacycles to four hundred THz. In this, the radiation is in the region of the electromagnetic spectrum . Infrared could be a communication medium whose properties are considerably totally different from those of radio frequencies. The necessary property of the infrared is that it cannot penetrate through walls. Which suggests that it is often simply contained inside a space. Because of this property, the infrared is often used in a way that reduces interference and the chance of reprocessing of a similar band in numerous rooms.

Its wavelength is longer than visible light but shorter than radio waves. The wavelength of the infrared ranges from 850 nm to 900 nm. Another advantage of infrared communication is that the massive information measure that is offered to be used, however has not been exploited to its full extent. The foremost disadvantage is that the sun generates radiation within the infrared band. This may cause tons of interference with IR communication. The infrared band is often utilized in the development of terribly high-speed wireless LANs in the future.

Applications and Standards :
Several standards are developed for associate degree infrared electrical circuit (IRDA). The IRDA-C commonplace provides the standards for the bidirectional communications utilized in conductor devices like mice; keyboards, joysticks, and hand-held computers. The IRDA-C commonplace operates at a touch rate of seventy-five Kbits/sec and therefore the distance varies, is up to eight meters. Another commonplace referred to as IRDA-D commonplace provides information rates from one hundred fifteen kb/s to 4Mb/s with a distance vary up to one meter. The IR electrical circuit was designed as a wireless different to connecting devices like laptop computers to a pointer. Purpose to purpose transmission permits for higher information rates. However, devices should stay in their locations. Broadcast permits for additional flexibility, however, with lower information rates. One advantage of infrared is that an associate degree independent agency license isn’t needed to use it. The sole disadvantage of infrared signals is that they can not penetrate walls or alternative objects and that they are units diluted by robust lightweight sources. 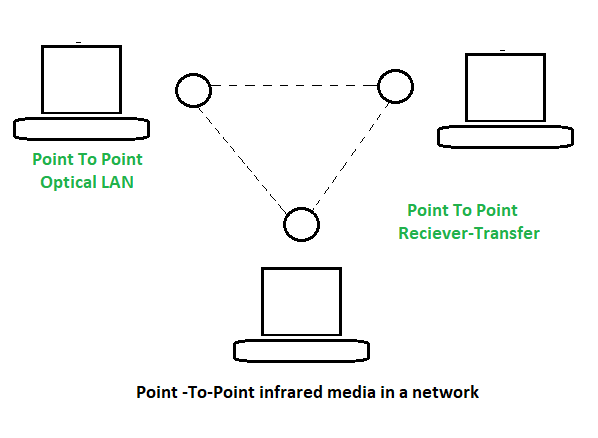 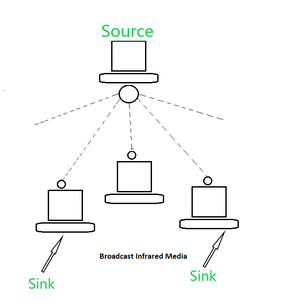