Imagine coming from a long day of work and crashing on the sofa, and suddenly friends ask to join a party. In this case, getting up from the sofa feels like the most difficult task due to tiredness and the comfort on the sofa would be snatched once up. Is this the case with just humans? NO. This is the same case with every other thing in the world, to put this more neatly and formally,

The property of any object by the virtue of which the object cannot change its state of either in rest or in motion is known as Inertia.

What was the measure factor that created inertia? It was mass. The mass of a body is responsible for creating inertia, the greater the mass of a body, the greater will be the inertia of the body. For instance, It is easy to stop by simply applying braking to a bicycle as the mass of the bicycle is less but it is a lot tougher to stop a bus or a truck, the breaks applied are not only mechanical but electrically they are stopped since the mass of a bus or a truck is more. The same is the case when these vehicles are to be started, more effort in bus/truck (since more mass) and less effort on a bicycle (since less mass).

Aristotle’s fallacy was based on the everyday observation of objects in motion. Imagine a ball in motion which was thrown some time ago, after some time, the ball has to come to rest. Aristotle presumed this to be a natural phenomenon and not an act of friction and hence claimed that an object in motion always has some external force applied to it, to else it shall come to rest. This concept contradicts the concept of inertia.

The concept of inertia was later established by Galileo famously also known as Newton’s first law of motion. It states that if an object is free-falling or rolling down an inclined plane, the distance traveled by the object is directly proportional to the time. Let s be the distance and t be the time traveled,

Galileo did an experiment to find this concept. Galileo decided to put the ball on two types of inclined planes as shown in the figure below. The first experiment had both planes equal, it was observed that the ball when rolled down from a certain height reached up to the same height when the surface is extremely smooth. In the second experiment, the other slope is decreased and observed that still the ball reaches up the same height.

Similarly, when the slope of the plane is completely removed, the ball shall reach infinity but due to the presence of friction, it stops after a certain point. Therefore, Aristotle’s concept was turned out to be false, since if any friction is not present (assuming), an object in motion shall always remain in motion. 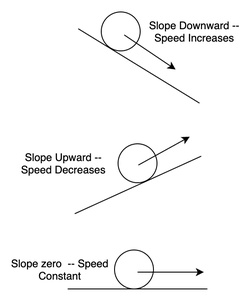 Question 1: When sitting in a bus, the brakes are applied, should the people in the bus move forward, backward, or remain intact?

Question 2: Why a carpet is beaten to remove dust?

Question 3: Which law of Newton is similar to the concept of inertia?

Question 4: When sitting in a train and the train suddenly starts, why do people sitting in it move backward.

The people initially were at rest along with the train and when force is applied on the train to move it forward, people in the train are still at rest, and therefore due to the inertia at rest, they want to be at rest and hence, they move backward.

Question 5: There are two different objects of different mass, one is 50kgs and the other is 30kgs. Which object will have more inertia and why?

Question 6: Which one would have more inertia, a pencil or an iron chair?