The forest and the other natural resources such as soil, water, and air are one of the most important heritage of any nation and contribute significantly to the economic growth of any nation. Thus, keeping track of forest cover is quite essential. This duty is fulfilled by the Ministry of Environment, forest and Climate change (MoEFCC) in India, which publishes a report called the India state of forest report, every 2 years based on the forest-covered across India. 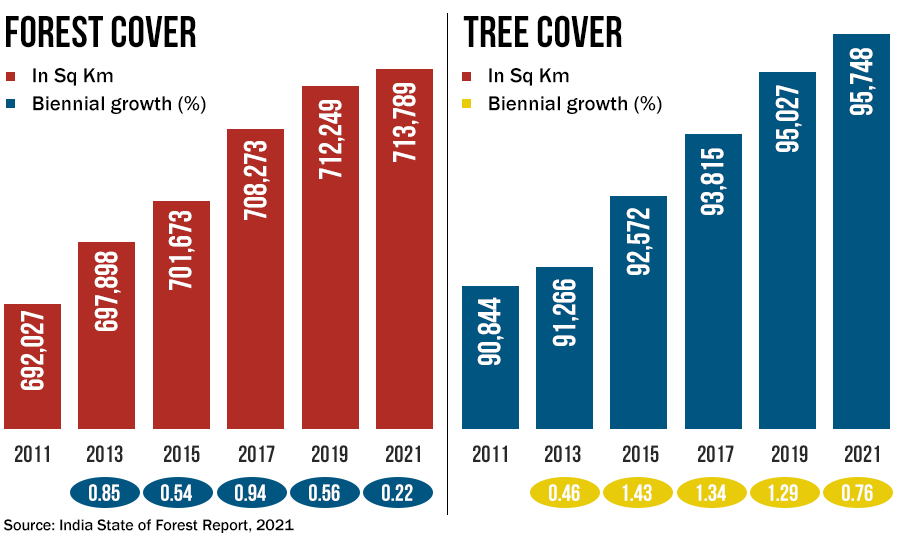 What is the India State of Forest Report (ISFR)?

The India State of Forest Report is a survey-based report published by the Ministry of Environment, forest and Climate change (MoEFCC) every 2 years. The main purpose of this report is to present the data based on the latest condition of the Indian forests and tree cover. The report is being published every 2 consecutive years since 1987. This report brings up the major concerns about the growth of forests and compliance with other international treaties like the Convention on Biological Diversity (CBD), Food and Agriculture Organization (FAO), and UN Framework Convention on Climate Change (UNFCCC). The India State of Forest Report has classified the Forests in India into 3 basic categories based on the density.

Forests with a density of less than 10% are also considered for the survey but do not fall under the above category in the India State of Forest Report (ISFR).

What are the Major Highlights of the India State of Forest Report (ISFR) 2021?

The data presented in the ISFR 2021, the area is quite promising and shows that the total forest cover of India has increased by 1540 Km2 in the last 2 years i.e. from 2019-2021. While on the other hand, the total tree cover area has also been increased by 721 Km2, and in the tree cover only trees are considered which do not belong to a dedicated forest area. Now at present, in 2021 the total forest area of India has reached almost 713789 Sq. Kilometers.

Madhya Pradesh holds the first position with the largest forest cover in India, with Arunachal Pradesh in the second position.

A Mangrove Forest is a forest that is found near sea coasts and trees found here usually grow and survives in saline water. In India, there are 3 states who have the highest mangrove forest cover i.e. Karnataka (3 sq. Km.), Maharashtra (4 Sq Km), and orifice ( 8 Sq Km). While the total Mangrove cover of the nation has increased by 17 Sq Km, thus making up the total mangrove forest cover of the nation to 4992 Sq Km,

What are the Alarming Concerns Found in IFSR 2021?

The major concerns found in the IFSR 2021 are below: