National Income refers to the value of goods & services produced by a nation during a particular financial year. Therefore, it is the net result of all the economic activities that take place during a financial year and is valued in monetary terms. It includes payments made to various resources either in form of rents, wages, interests & profits. A country’s progress can be estimated by the growth of its National Income.

According to Marshall: “The labor and capital of a country acting on its natural resources produce annually a certain net aggregate of commodities, material and immaterial including services of all kinds. This is the true net annual income or revenue of the country or national dividend.”

The total value of all the goods & services produced in a country during a particular year is known as its gross domestic product.

It also includes the country’s net income arising from abroad. Four primary constituents of GNP are:

The National Income of a nation can be measured by 3 different methods:-

The income method calculates the National Income based on factor incomes. The incomes received by every resident of a country for the productive services provided by them during a year are added together to determine the National Income of an economy. In other words, under the Income Method of calculating National Income, all incomes of a country accruing to the factors of production through rent, wages, profits, interest, etc., are added up together for the determination of National Income. This method is also widely known as the Factor Payment Method or Distributive Share Method.

The total of all the income earned by factors of production within a domestic territory of a nation is known as Domestic Income(NDPFC).

According to Hanson, “Net domestic Income is the income generated in the form of wages, rent, interest, and profit in the domestic territory of a country by all producers (normal residents and non-residents) in an accounting year.”

Three exceptions in the elements of COE:

Interest refers to the income earned from lending funds to production units. It includes both actual & imputed interest provided by entrepreneurs. Interest income consists of the interest on loans taken for productive services. It doesn’t include interest paid by one firm to another, interest paid for loans by a consumer taken for consumption, and interest paid by the government on public debt.

Profit is the income or reward of the entrepreneur for his contribution to manufacturing of goods & services. In other words, it is the residual income that an entrepreneur earns after paying off all other factors of production.

The profit earned is used for three purposes:

Operating surplus is another term used in factor payments. It is the sum total of income from property, i.e., rent, royalty, and interest, and income from entrepreneurship, i.e., profit.

Calculate the operating surplus using the given below information.

It is the income generated by unincorporated enterprises, such as small shopkeepers, retail traders, etc., and own-account workers like farmers, barbers, etc. The term mixed income is used for any kind of income which has more than one kind of factor income. It arises from self-employed workers’ productive services. The income of these workers includes profit, rent, wages, and interests and can not be separated from each other. For example, a tutor giving tuitions at his residence.

The first step is to identify and classify the factors of production of all the producing firms into primary, secondary and tertiary sectors.

The next step is to calculate domestic income NDPFC . The total of all the factor incomes is known as Domestic Income(NDPFC ).

The last step of calculating National Income through the Income Method is the estimation of Net Factor Income from Abroad(NFIA). NFIA is added to domestic income (NDPFC) to get the National Income(NNPFC). 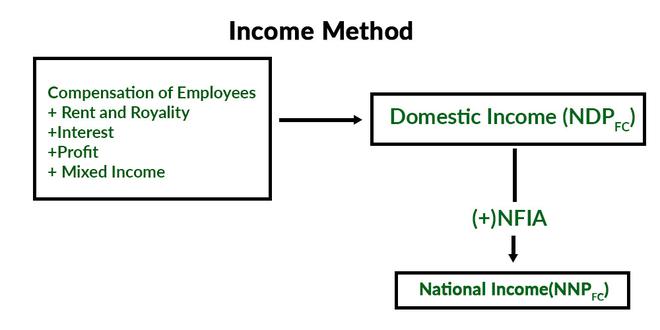 1. Transfer Income will not be included: Transfer incomes such as donations, charity, scholarships, old age pensions, etc., are not counted in the National Income, as these activities are not connected to any production activity and no value addition takes place.

2. Income from Sale of Second Hand Goods will not be included: Income received from the sale of second hand goods also known as capital gains is not calculated in National Income, as their original sale has already been included at the time of purchase. If these goods are calculated again, then it will lead to the problem of double counting. However, any kind of commission or brokerage received by agents on the sale of these goods will be included, as it is an income received for rendering productive services.

3. Income from Sale of Securities will not be included: Income from the sale of bonds, shares, and debentures will not be calculated, as these transactions do not contribute to the current flow of goods & services. These financial assets are just paper claims and include the transfer of title only. However, any kind of commission or brokerage on such assets is included in National Income, as it is a productive service.

4. Windfall Gains will not be included: Income that arises from windfall gains like horse racing, lotteries, etc., are not calculated in the determination of National Income, as they are not connected with any kind of production activity.

5. Imputed Value of Services by Owners of Production Units will be included: The imputed value of self-occupied houses, production for self-consumption, interest on own capital, etc., are included under National Income, as these are productive activities and add to the current flow of goods & services of the economy.