In a weighted graph, Is zero allowed as an edge’s weight?

In this article, we will discuss the overview of the Graph and will focus on a scenario wherein a weighted graph, Is zero allowed as an edge’s weight. Let’s discuss it one by one as follows.

Example –
Take a look at the following graph as follows. 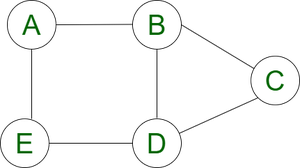 Pictorial representation of a graph.

In the above graph G(V, E) as follows.

Weighted Graphs :
A weighted graph is a graph such that each edge is labeled with a number, called the weight of that edge. 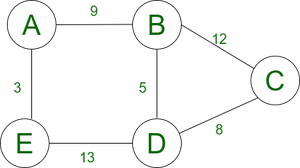 Pictorial representation of a weighted graph

Example –
For example, the vertices of the graph above may represent certain towns in India, and the edges may represent roads between the towns, with their separation distances marked.

In a weighted graph, Is zero allowed as an edge’s weight :
The simple answer to the above question is that, If zero-weighted edges are helpful to you, you are free to use them but make sure you let the readers know about it. Below two cases represent that zero-weighted edge can or cannot use depends on the situation.

Step-1 :
Suppose, in your graph, vertices represent a person. The edge-weight represents the money borrowed by one from another. 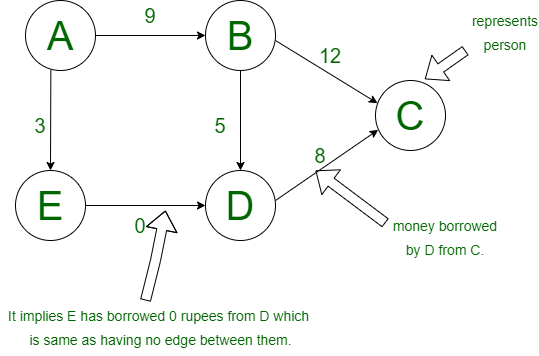 Step-3 :
So, From the above figures, we can see that figure -1 and figure-2 are the same. In this case, the zero-weight edge is allowed.

CASE-2 :
Zero weighted-edge is not allowed – 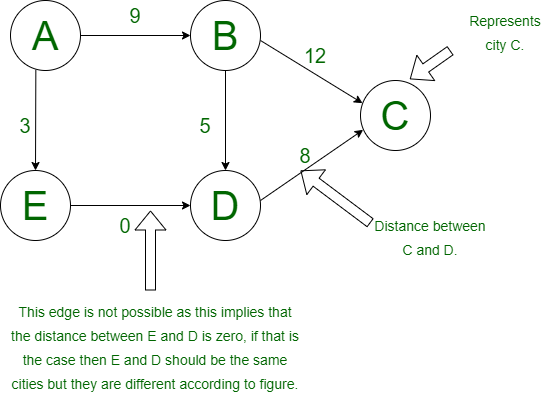 Step-2 :
In that case, zero weighted-edge is not allowed, as the distance between cities E and D are zero so E and D should be the same cities that implies E should be equal to D, but that’s not possible, they are different so here we cannot use zero-weighted edge.

Step-3 :
We cannot use a zero-weighted edge here.