Implementing DFA for no runs of length less than 4 for input (a,b)

DFA or Deterministic Finite Automata is a finite state machine, in which on every input alphabet a transition is done from one state to another state according to set of defined rules as per the need of string acceptance.
In this particular problem, runs of length is the factor to think about.The input alphabets are {a, b}. No runs of length less than 4 means any input alphabets repeats itself minimum 4 times.

Input: n = “aaaabbbbaaaabbbbbaaaaa”
Output: string accepted
Explanation: Every unique occurrence of a and b are repeated at least 4 times. Hence DFA passed.

Designing DFA step by step:
Step-1: First we have to think about what input alphabet is inputted. As this is about minimum 4 runs of length. Take input alphabet is ‘a’ on state “A” and mark this state as initial state. The following transition occur on input ‘a’:

input of run of length 4

Mark state “Q” to final state. And also runs of length more than 4 is also acceptable so put self loop on final state “Q”. 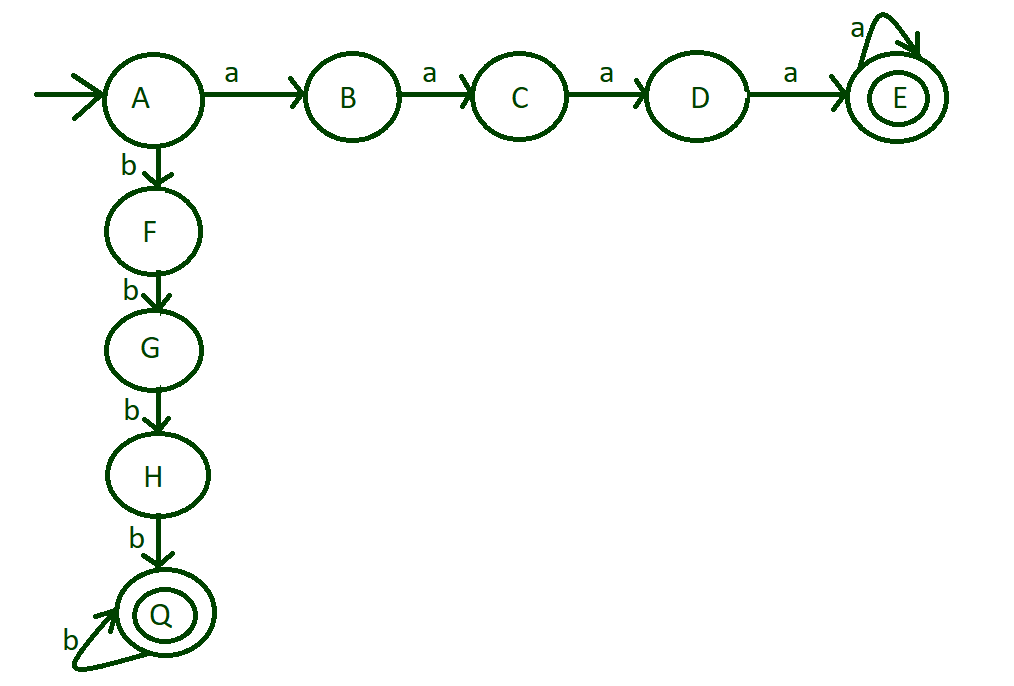 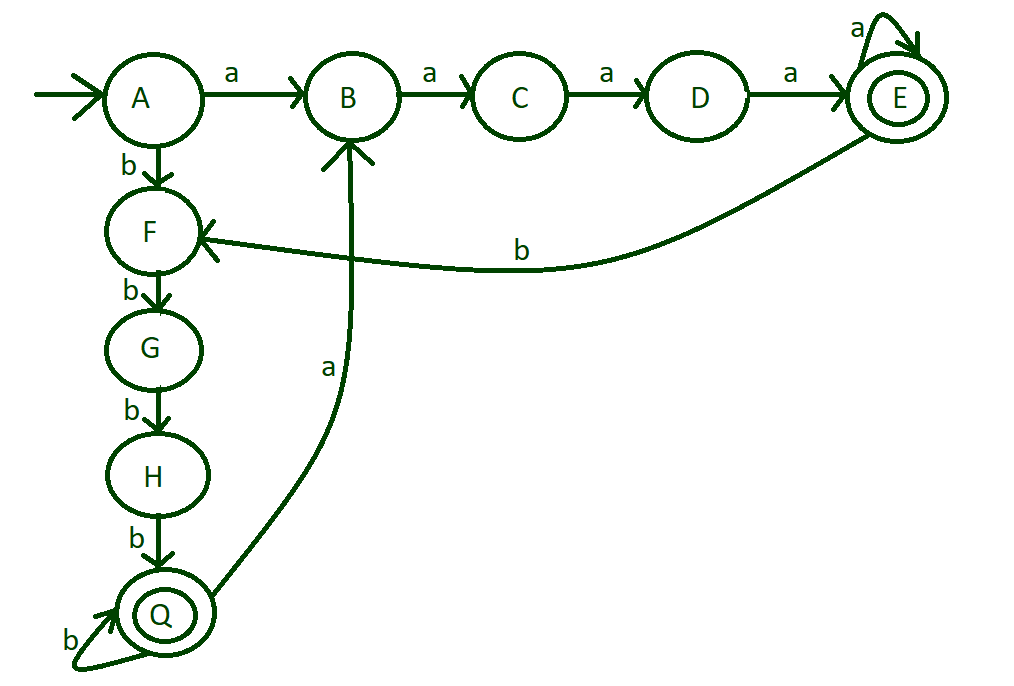 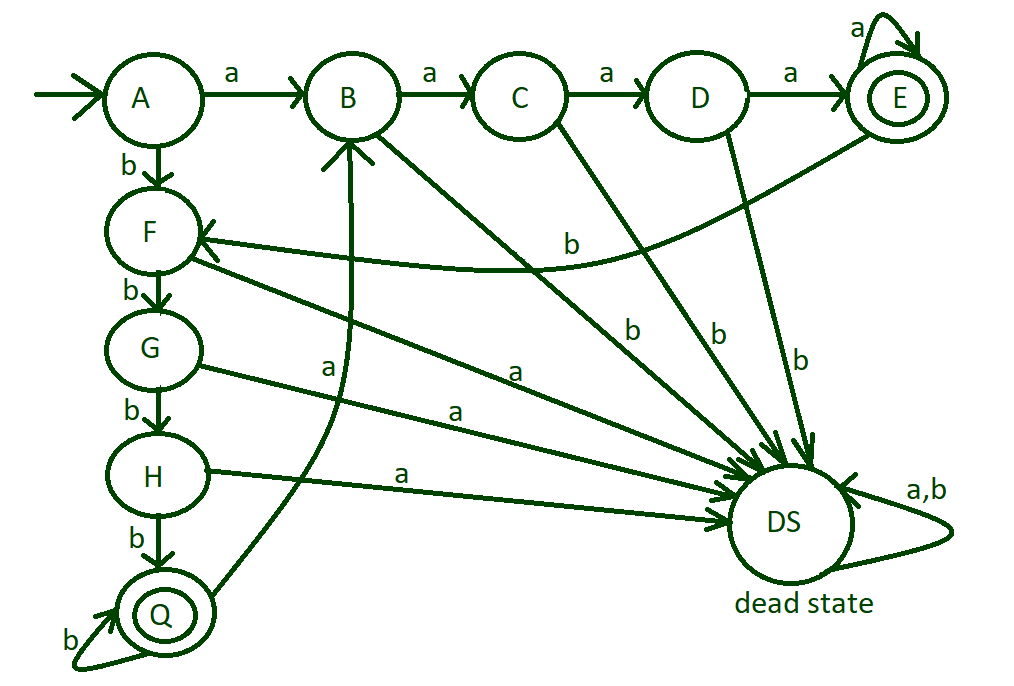 Transition Table of above DFA:
Here “A” is initial state and “E” and “Q” are final states. DS is termed as DEAD STATE 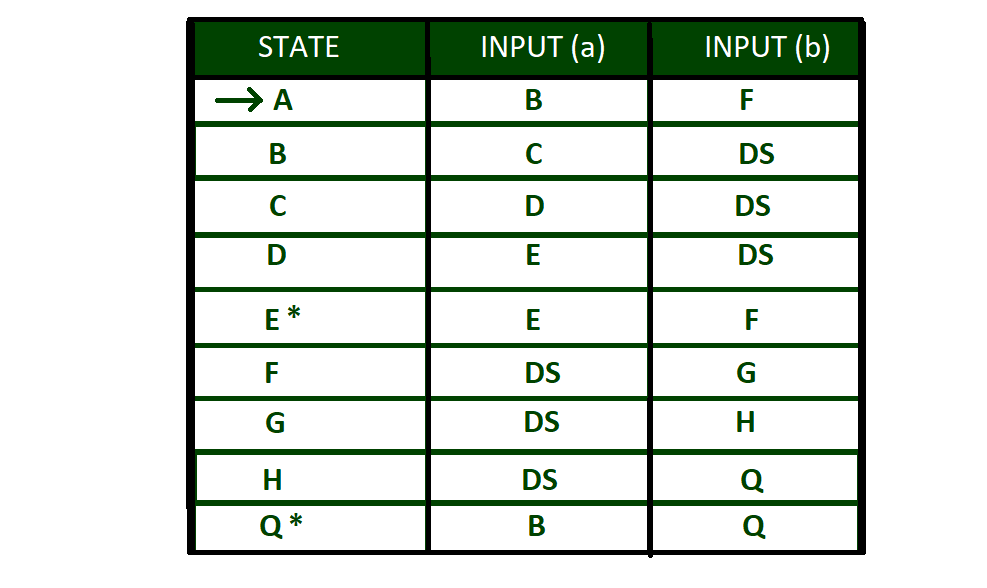 Python implementation of above DFA:

Previous
Check if a pair of strings exists that starts with and without the character K or not
Next
Count all prime numbers that can be formed using digits of a given number
Related Articles
1. Design DFA in LEX Code that accepts the string having even binary number over input alphabet {0,1}
2. Program to build DFA that starts and end with 'a' from input (a, b)
3. DFA that recognizes number of 0 is multiple of 3 on input {0,1}
4. Construct DFA with Σ = {0, 1} and Accept All String of Length At Most 2
5. Construct DFA with Σ = {0, 1} and Accept All String of Length at Least 2
6. Count the number of words having sum of ASCII values less than and greater than k
7. Count of alphabets having ASCII value less than and greater than k
8. Find an N-length permutation that contains subarrays with sum less than Bitwise XOR
9. Count of integers of length N and value less than K such that they contain digits only from the given set
10. Lexicographically smallest permutation of a string that can be reduced to length K by removing K-length prefixes from palindromic substrings of length 2K
Article Contributed By :