Implementing an Autoencoder in PyTorch

Autoencoders are a type of neural network which generates an “n-layer” coding of the given input and attempts to reconstruct the input using the code generated. This Neural Network architecture is divided into the encoder structure, the decoder structure, and the latent space, also known as the “bottleneck”. To learn the data representations of the input, the network is trained using Unsupervised data. These compressed, data representations go through a decoding process wherein which the input is reconstructed. An autoencoder is a regression task that models an identity function.

This structure comprises a conventional, feed-forward neural network that is structured to predict the latent view representation of the input data. It is given by:

This structure comprises a feed-forward neural network but the dimension of the data increases in the order of the encoder layer for predicting the input. It is given by:

represents the low-dimensional, data space generated by the Encoder Structure and

This is the data representation or the low-level, compressed representation of the model’s input. The decoder structure uses this low-dimensional form of data to reconstruct the input. It is represented by 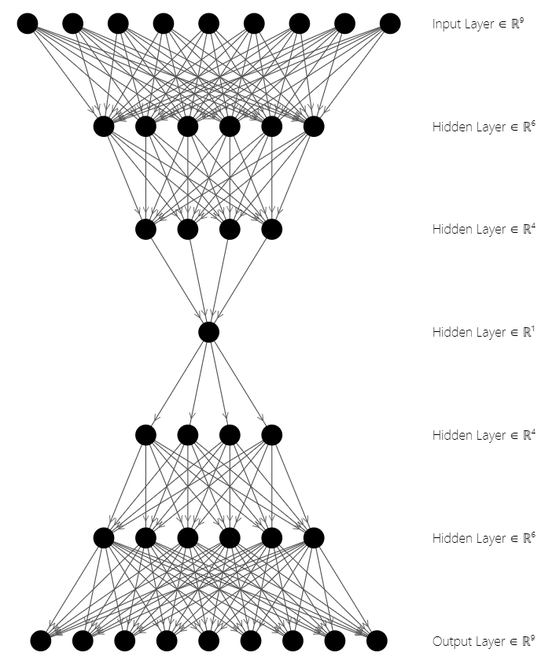 Implementation of Autoencoder in Pytorch

We will use the torch.optim and the torch.nn module from the torch package and datasets & transforms from torchvision package. In this article, we will be using the popular MNIST dataset comprising grayscale images of handwritten single digits between 0 and 9.

In this coding snippet, the encoder section reduces the dimensionality of the data sequentially as given by:

Where the number of input nodes is 784 that are coded into 9 nodes in the latent space. Whereas, in the decoder section, the dimensionality of the data is linearly increased to the original input size, in order to reconstruct the input.

Where the input is the 9-node latent space representation and the output is the 28*28 reconstructed input.

The encoder starts with 28*28 nodes in a Linear layer followed by a ReLU layer, and it goes on until the dimensionality is reduced to 9 nodes. The decryptor uses these 9 data representations to bring back the original image by using the inverse of the encoder architecture. The decryptor architecture uses a Sigmoid Layer to range the values between 0 and 1 only.

We validate the model using the Mean Squared Error function, and we use an Adam Optimizer with a learning rate of 0.1 and weight decay of

The output against each epoch is computed by passing as a parameter into the Model() class and the final tensor is stored in an output list. The image into (-1, 784) and is passed as a parameter to the Autoencoder class, which in turn returns a reconstructed image. The loss function is calculated using MSELoss function and plotted. In the optimizer, the initial gradient values are made to zero using zero_grad(). loss.backward() computes the grad values and stored. Using the step() function, the optimizer is updated.

The original image and the reconstructed image from the outputs list are detached and transformed into a NumPy Array for plotting the images.

Note: This snippet takes 15 to 20 mins to execute, depending on the processor type. Initialize epoch = 1, for quick results. Use a GPU/TPU runtime for faster computations. 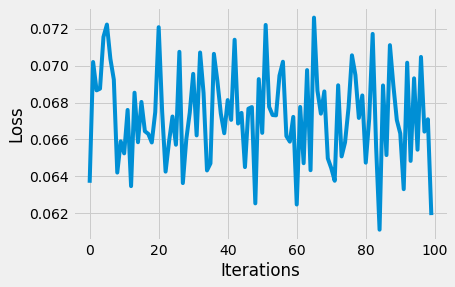 Although the rebuilt pictures appear to be adequate, they are extremely grainy. To enhance this outcome, extra layers and/or neurons may be added, or the autoencoder model could be built on convolutions neural network architecture. For dimensionality reduction, autoencoders are quite beneficial. However, it might also be used for data denoising and understanding a dataset’s spread. 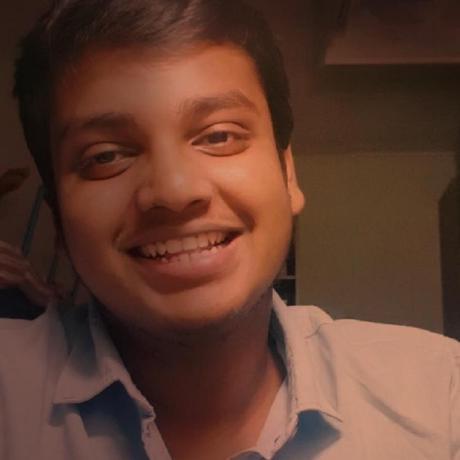