Image Segmentation: In computer vision, image segmentation is the process of partitioning an image into multiple segments. The goal of segmenting an image is to change the representation of an image into something that is more meaningful and easier to analyze. It is usually used for locating objects and creating boundaries.

It is not a great idea to process an entire image because many parts in an image may not contain any useful information. Therefore, by segmenting the image, we can make use of only the important segments for processing.

An image is basically a set of given pixels. In image segmentation, pixels which have similar attributes are grouped together. Image segmentation creates a pixel-wise mask for objects in an image which gives us a more comprehensive and granular understanding of the object.

There are many more uses of image segmentation.

In this article, we will perform segmentation on an image of the monarch butterfly using a clustering method called K Means Clustering.

K-means clustering is one of the most commonly used clustering algorithms. Here, k represents the number of clusters.

Code: Read in the image and convert it to an RGB image. 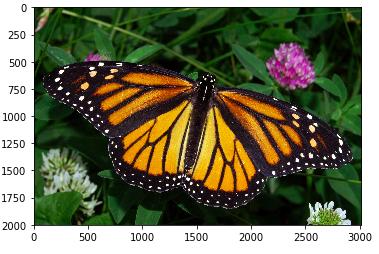 Now we have to prepare the data for K means. The image is a 3-dimensional shape but to apply k-means clustering on it we need to reshape it to a 2-dimensional array.


Now we will implement the K means algorithm for segmenting an image.

Code:  Taking k = 3, which means that the algorithm will identify 3 clusters in the image. 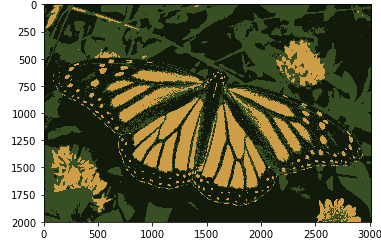 Now if we change the value of k to 6, we get the following Output: 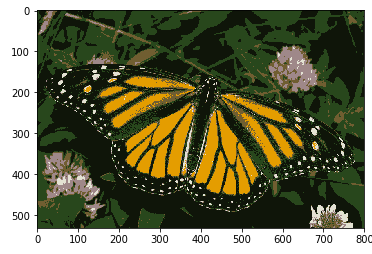 As you can see with an increase in the value of k, the image becomes clearer and distinct because the K-means algorithm can classify more classes/cluster of colors. K-means clustering works well when we have a small dataset. It can segment objects in images and also give better results. But when it is applied on large datasets (more number of images), it looks at all the samples in one iteration which leads to a lot of time being taken up.