I2C stands for Inter-Integrated Circuit. It is a bus interface connection protocol incorporated into devices for serial communication. It was originally designed by Philips Semiconductor in 1982. Recently, it is a widely used protocol for short-distance communication. It is also known as Two Wired Interface(TWI).

Working of I2C Communication Protocol :
It uses only 2 bi-directional open-drain lines for data communication called SDA and SCL. Both these lines are pulled high.

Each data bit transferred on SDA line is synchronized by a high to the low pulse of each clock on the SCL line. 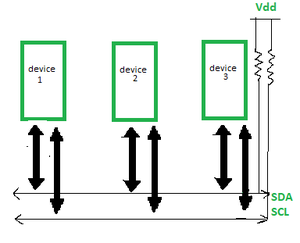 According to I2C protocols, the data line can not change when the clock line is high, it can change only when the clock line is low. The 2 lines are open drain, hence a pull-up resistor is required so that the lines are high since the devices on the I2C bus are active low. The data is transmitted in the form of packets which comprises 9 bits. The sequence of these bits are –

Between each start and stop condition pair, the bus is considered as busy and no master can take control of the bus. If the master tries to initiate a new transfer and does not want to release the bus before starting the new transfer, it issues a new START condition. It is called a REPEATED START condition.

After every data frame, follows an ACK/NACK bit. If the data frame is received successfully then ACK bit is sent to the sender by the receiver.

The address frame is the first frame after the start bit. The address of the slave with which the master wants to communicate is sent by the master to every slave connected with it. The slave then compares its own address with this address and sends ACK.

In the I2C communication protocol, the data is transmitted in the form of packets. These packets are 9 bits long, out of which the first 8 bits are put in SDA line and the 9th bit is reserved for ACK/NACK i.e. Acknowledge or Not Acknowledge by the receiver.