Hydrogen is the lightest element. Under standard conditions, hydrogen is a gas in a diatomic molecule with the formula H2. It is colorless, odorless, tasteless, non-toxic, and flammable. Hydrogen is the most abundant chemical in the universe, accounting for about 75% of all common matter. Chlorine (Cl) is a halogen element or the second lightest element in Group 17 (Group VIIa) of the periodic table. Chlorine is a green-yellow, toxic, corrosive gas that is irritating to the eyes and respiratory system. Oxygen (O) is the nonmetallic chemical element of group 16 (VIa or oxygen group) of the periodic table. Oxygen is the colorless, odorless, tasteless gas required by living things that are absorbed by animals and converted into carbon dioxide. Plants, in turn, use carbon dioxide as a carbon source and return oxygen to the atmosphere.

Hypochlorous acid is a weak and unstable acid that forms naturally when chlorine is dissolved in water. Most notably, it is known by many names such as perchloric acid, hydrogen hypochlorite, chlorine hydroxide, and chloranol. Additionally, they cannot be separated from these solutions due to their rapid equilibration with the precursors. It is also a member of reactive oxygen species and the conjugate acid of oxo and hypochlorite of chlorine.

The chemical formula for hypochlorous acid is HOCl. Its molecular formula is written as HClO and has a molar mass of 52.46 g/mol. It is a simple molecule with central oxygen connected to chlorine and hydrogen atoms by a single bond. 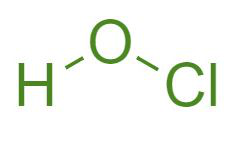 When chlorine is added to water, hypochlorous acid is produced along with hydrochloric acid (HCl).

This reaction is in equilibrium, and it is not easy to separate HOCl from this mixture. However, stable hypochlorite can be made by dissolving chlorine gas in sodium hydroxide solution or other aqueous alkali solution. Another way to prepare it is to dissolve dichlorine monoxide in water.

Question 1: How to make hypochlorous acid?

HOCl can be prepared in situ using non-iodine salt, water, and electrolysis. The in-situ HOCl system is a 1-liter container filled with water to which 1 g of non-iodized salt and one teaspoon of vinegar has been added.

Question 2: How to make hypochlorous acid from the salt?

It takes literally seconds to mix 1 liter of cool water, 2 g of kosher salt (which comes with 1 g spoon), and 1 teaspoon of distilled white vinegar (maintaining the correct pH). The machine connects and makes a decision in about 5 minutes.

This study investigated whether hypochlorous acid (HA) could be used as an alternative disinfectant for DA in a clinical setting. HA is used worldwide as a safe and economical disinfectant with broad antibacterial activity and a low risk of hand irritation.

Question 5:  Can hypochlorous acid be used in food?

Hypochlorous acid is commonly used to disinfect foods such as vegetables, fruits, and meat. This acid is widely used in the food industry as a disinfectant for food processing equipment. However, hypochlorous acid readily reacts with proteins to form aggregates and oxidizes certain amino acids.

Question 6: Does the hypochlorous acid smell?

When hypochlorite disinfectant is sprayed on the surface, the proteins in the embryonic cell membrane undergo a chemical reaction to form chloramines. It emits a swimming pool-like odor.