Hydrogen is one of the main components of water. The hydrogen atom, as symbol H, is the first element in the periodic table. Hydrogen reacts with oxygen to form water. It has an atomic mass of 1.007825 g.mol-1 and atomic number 1. It is formed with one unit of positive charge and one electron of a nucleus. Sulfate, also Sulphate, is an ion, a salt of sulfuric acid with a molar mass of 96.06 g/mol. Sulfate is soluble in water, divalent anion produced by the oxidation of elemental sulfur and organic sulfur. The empirical formula of sulfate is SO42-. 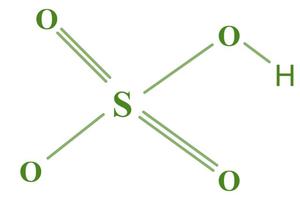 when we treat hydrogen sulfate with the water, it produces the hydronium ion and sulfate ion:

It forms both nitrous acid and sulfate ion at the same time when it reacts with the nitrate ion. The chemical reaction is as follows,

It is generally utilized in the manufacture of chemicals, e.g., in producing HCl, nitric acid, sulfate salts, engineered cleansers, colors, and medications. It is utilized in oil refining to clean pollution out of fuel and other refinery products.

Question 2: What does hydrogen sulfide do to the body?

Hydrogen sulfide (H2S) is a vapid gas with areas of strength for spoiled eggs. Openness to hydrogen sulfide might make bothering the eyes and respiratory framework. It can likewise cause unconsciousness, wooziness, migraine, shortcoming, crabbiness, sleep deprivation, and stomach upset.

Question 3: What is the principal issue in involving hydrogen as fuel?

The principal issue in involving hydrogen as a fuel for vehicles is capable of hydrogen. Hydrogen is hard to store since it spills without any problem. Additionally, it is very perilous as fuel because of its low start temperature and high burning energy.

Question 4: What does battery acid consists of?

Lead-corrosive batteries comprise two lead plates isolated by a synthetic arrangement for the most part made of 30 to 50 percent sulfuric acid, i.e., battery acid. When completely energized, the battery’s negative plate is decidedly lead, the electrolyte is concentrated sulfuric acid, and the positive plate comprises lead dioxide.

Hydrogen sulfide is a boring, combustible gas that scents like spoiled eggs at low fixation levels in the air. It is generally known as sewer gas, smells clammy, and compost gas. At high fixation levels, it has a nauseating sweet scent.

Question 6: What acid is called the King of chemicals?

Concentrated sulfuric acid is called King of Acids since it is solid corrosive, and exceptionally destructive. It is more responsive than different acids.

At extremely high fixations in air, hydrogen is a basic asphyxiant gas due to its capacity to displace oxygen and cause hypoxia (ACGIH 1991). Hydrogen has no other known poisonous action.