The chemical element hydrogen has the symbol H and the atomic number 1. The lightest element is hydrogen. Under normal circumstances, hydrogen is a gas composed of diatomic molecules with the formula H2. It’s odorless, colorless, non-toxic, and extremely flammable. Hydrogen is the most abundant chemical element in the universe, accounting for around 75% of all ordinary stuff. The Sun, for example, is mostly made up of hydrogen in its plasma state. The majority of hydrogen on the planet is found in molecule forms like water and organic substances. Each atom of the most common hydrogen isotope (symbol 1H) has one proton, one electron, and no neutrons.

The simplest member of the peroxide family is hydrogen peroxide, which was originally discovered as a chemical substance in 1818 by French chemist J.L Thenard. H2O2 is its molecular formula. Hydrogen peroxide can be found in very low amounts in the environment. Photochemical reactions in the atmosphere around the earth produce gaseous hydrogen peroxide. It is used as a disinfectant as well as a bleaching agent. It’s acidic, with a pH of 6 to 7 at 298 degrees Fahrenheit.

The hydrogen bond parameters in the gaseous and crystalline phases are:

Hydrogen peroxide is a fluid that can be used in a variety of ways. It works in all media, including water, air, wastewater, and soils. To improve and accelerate processes, it is sometimes coupled with other agents. The following are some of its applications:

The following are the physical and chemical properties of hydrogen peroxide: 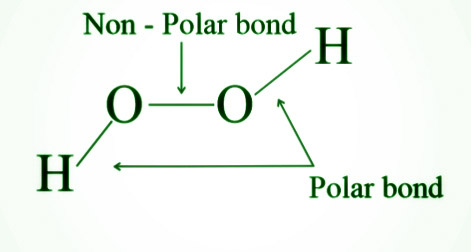 Because of its molecular structure, H2O2 is a one-of-a-kind material. It is made up of oxygen atoms in the oxidation state of -1, as opposed to the oxidation states of 0 or -2 in many other compounds. This indicates that, depending on the pH of its solution, this chemical can act as both an oxidizing and a reducing agent.

The presence of metals such as platinum, gold, metal oxides (MnO2), or specific metal ions such as Fe2+ ions speeds up the breakdown process. Its breakdown is aided by even a rough surface.

Hydrogen peroxide acts as a reducing agent in both acidic and alkaline mediums when powerful oxidizing agents are present. The combination of H2O2 and the nascent oxygen [O] generated by the strong oxidizing agent produces molecular oxygen in all of these processes.

2) In the presence of dilute sulphuric acid, it converts manganese dioxide to manganese sulphate.

2) In the basic media, it converts iodine to iodide ions.

H2O2 is a powerful oxidising agent because it readily takes electrons and is reduced in both alkaline and acidic environments.

2) It extracts iodine from a potassium iodide solution that has been acidified.

2) When chromium sulphate is oxidized by hydrogen peroxide in an alkaline media, the dark green colour changes to yellow sodium chromate.

1) It oxidizes sulphites to sulphates.

2) It converts nitrites to nitrates by oxidising them.

This method is inefficient because barium sulfate generates a protective coating around H2O2 that inhibits it from continuing the chemical reaction. The Ba2+ ions in the solution slowly decompose hydrogen peroxide. As a result, the solution cannot be stored for an extended period of time. Phosphoric acid, rather than sulphuric acid, is used to test this. The barium phosphate that forms is entirely precipitated, and there is no threat of hydrogen peroxide breakdown in the absence of Ba2+ ions.

The cell’s peroxide sulfuric acid is removed and decomposed with water to produce hydrogen peroxide.

The hydrogen peroxide is obtained by distilling the ammonium peroxide sulphate produced at the anode with water.

Question 1: Is it safe to use hydrogen peroxide?

Most people are safe when they utilise hydrogen peroxide correctly. However, if a person takes the substance too frequently or in a high dosage, it might be dangerous. To avoid irritation, it’s critical to use a concentration of no more than 3% and to use it sparingly. Because there is a risk of swallowing hydrogen peroxide, children should avoid handling it.

When hydrogen peroxide is allowed to stay on surfaces for at least 10 minutes at room temperature, it is most effective. Hydrogen peroxide can deactivate a wide range of microorganisms, including viruses, bacteria, fungus, and spores, and acts as a disinfectant by eliminating critical components of germ cells.

Hydrogen peroxide is a good option to use on inanimate surfaces like metal, glass, and plastics when it comes to reducing germs in your home and containing the spread of Covid19. According to the Centers for Disease Control and Prevention (CDC) (CDC).

When we talk about bleach, we’re talking about chlorine bleach, which is made up of sodium hypochlorite. Bleach, like hydrogen peroxide, produces nascent oxygen, which is a bleaching agent. Despite the fact that bleach is more powerful than hydrogen peroxide, it is a very dangerous toxin. It requires careful dilution for safe use, and only cold water should be used. Hydrogen peroxide, on the other hand, has a lower environmental impact and is effective in treating wastewater and disinfecting substances.

Gargling with hydrogen peroxide may help to relieve a sore throat, disinfect the mouth, and whiten the teeth. However, it should be diluted. If swallowed, a higher concentration of hydrogen peroxide causes internal organ damage as well as excessive bleeding. While rinsing with the diluted solution, prevent ingestion. To develop whiter teeth with merely gargling or rinsing, though, you’ll need to do it for a long time.

Question 5: What is Merck’s process?

In this technique, sodium peroxide is added in minute amounts to a weak sulphuric acid (20%) solution covered by ice and regularly stirred. Crystals of Na2SO4. 10H2O occur as the solution is cooled further, and they can be filtered out. A 30 percent hydrogen peroxide aqueous solution is used.

Question 6: What is the difference between water and hydrogen peroxide?