Crime is the biggest social problem of our society which is spreading day by day. Thousands of crimes are committed every day, and still many are occurring right now also all over the world. A crime occurs in many faces, it can happen in any face like robberies, murders, rapes, aggravated and simple assault, homicide, etc. In many cases the absence of police is observed at crime spots, it may be because they do not have a proper address or sometimes nobody informed them. Therefore, we have tried to address the problem with the help of our project wherein the focus would be to detection of crime on time and help the nearest police station officers to reach on time at the crime spot using location sharing through an alert message in form of SMS ( Short Messaging Service).

As the title suggests, the project will be a desktop application that has a feature to work in the background itself and by using Machine Learning and Deep Learning concepts, it will detect and analyze human screams in a real-time environment and if this application found something serious in it’s surrounding then it will automatically send alert message to the nearest police station with the location of its user. Not only this, the application will capable to detect clear human sound from the background noise.

Objective: The Objective of this project is to use the advanced technologies in such a way that they can be used to help someone save their life and to control the crime rate.

Let’s look at the implementation of this project into different steps which are described below:

First, the UI or the user interface of the project is developed. We will develop the UI using Kivy ( Python) framework, which the user will use to interact. Let’s look at the UI of this project. 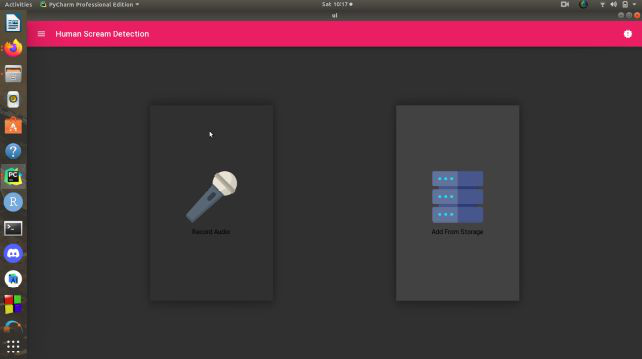 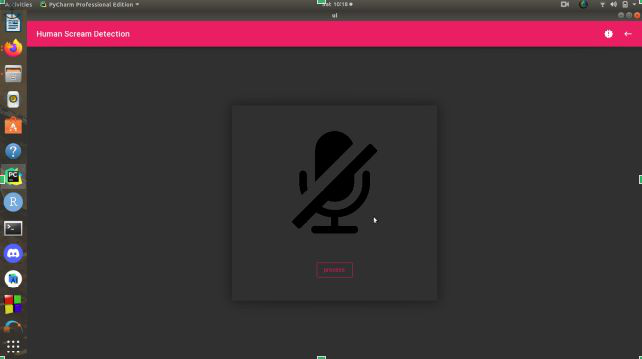 Note: The data set for this project is collected from different websites like https://www.freesoundeffects.com/.

The next step is the extraction of MFCCs from the data set using Librosa library and save the extracted MFCCs in a CSV file on your computer.

Note: MFCCs stands for Mel Frequency Cepstral Coefficients, is a feature that is widely used in automatic speech and speaker recognition.

Step 4: Training of SVM model and its saving

Next, we will train SVM (Support Vector Machine) model over those MFCCs which we had created in the previous step and when the whole training gets completed then we will save it using TensorFlow library. There is a diagram given below for detection of noise, speech, shout and scream using SVM classifier.

Step 5: Training of MPN model and its saving

Now, we will train MPN (Multilayer perceptrons model) over sounds present in the data set to get good accuracy of the model and when the whole training gets completed then again save it using TensorFlow library as we do earlier. The working diagram of MPN is given below.

However, the project is currently under development so we are providing the idea only that how one can develop this feature. For the development of this feature, we can take the help of databases and can send SMS to that number at the time of any emergency detected by the project.

A working diagram of this project is provided to you, which explains the internal working of both models and will be used in implementing the project. 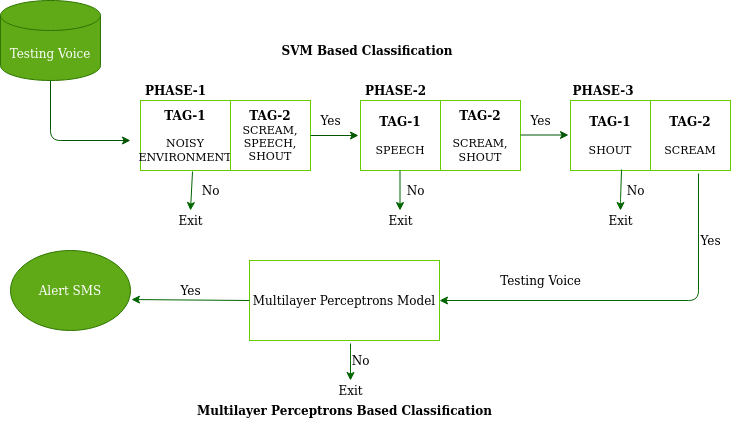 Combined internal working of both models  (SVM and MPN)

The research paper has got published at the 5th International Conference on Inventive Systems and Control [ICISC 2021] on the topic of Human Scream Detection through three-stage supervised learning and deep learning.