Human pregnancy begins with the process of fertilization and ends with the birth of an individual. The average length of a human pregnancy is 9 months or 40 weeks. Fertilization is the process in which sperm from a male fuses with an egg from a female and as a result, a zygote is formed. During human pregnancy, a placenta is formed. The placenta is the structure that connects the mother with her fetus. The function of the placenta is nutrient uptake, gas exchange via the mother’s blood supply, waste elimination, production of hormones to support pregnancy, and fighting against internal infection.

This process begins with an ejaculation of sperms from males to the female vagina. Now, these sperms will travel through the fallopian tube to meet the eggs which are released by the ovary, and then the fertilization process will begin in the fallopian tube. The first step involves the fusion of male (sperm) and female (egg) gametes and then their nuclei will be fused to form a single nucleus and this results in the formation of a zygote (also known as fertilized eggs). The zygote is the new beginning of a new individual. 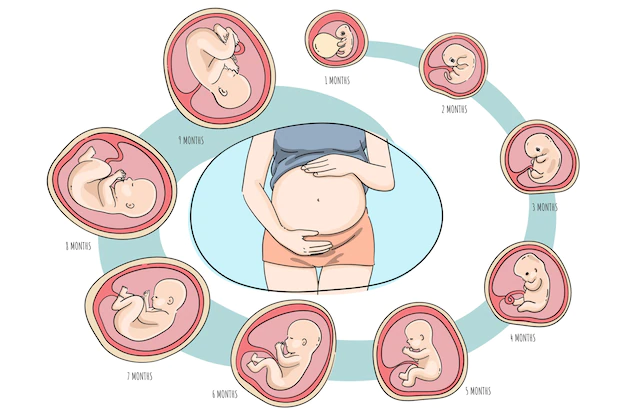 The merging of the endometrium and outer layer of the embryo formed the placenta. The main work of the placenta is to maintain the balance of nutrients and waste in the embryo and fetus. In this trimester, internal organs and body structures begin to develop. After 5 weeks, eyes, heart, and liver have been developed. After 8 weeks, the fetus will grow to 5 cm long.

In this, you usually can feel the active movements of the fetus. In this, the fetus grows about 30 cm long. All organs and the structure of the fetus continue to develop. In this production of estrogen and progesterone, waste and nutrition are under the control of the placenta.

The most uncomfortable stage for pregnant women. In this, the fetus grows about 50 cm long. This is the trimester where the fetus grows rapidly. Organ development continued from previous stages. In this Trimester, pregnant women can frequently urinate due to the pressure on the urinary bladder because of the fetus. In this, they may also face circulation and intestinal problems.

Depression and anxiety-These conditions can make significant effects on pregnant women and fetuses. Getting treatment is important for both fetus and mother to avoid miscarriage.

High blood is pressures-Also known as hypertension. Poorly controlled of this can cause risk to the fetus. You can get treatment for high blood pressure before, during, and after the pregnancy to avoid complications.

Obesity and weight gain-Overweight and obese pregnant women can face numerous complications like preeclampsia, stillbirth, and cesarean delivery. You can avoid this complication by losing weight before pregnancy.

Gestational diabetes-When a woman doesn’t have diabetes before pregnancy but during pregnancy, they develop diabetes, that diabetes is known as gestational diabetes. This can be managed properly with health care. If this is not controlled, then it can cause large infants and cesarean delivery.

Preeclampsia-The cause of this is still unknown, but a very risky medical condition that leads to preterm delivery and death.

Stillbirth-This is the loss of a fetus after the 20th week of pregnancy. This can be caused by placental problems, poor fetal growth, and chromosomal abnormalities.

Pregnancy Losses or Miscarriage-Loss of the fetus before the 20th week of pregnancy. Noticeable symptoms include cramping, vaginal discharges, and bleeding from the vagina.

Missed periods-This are the first sign of pregnancy. Sometimes women face slight bleeding at the time of implantation.

Nausea with or without vomiting-This symptom is noticed within 2 to 8 weeks after conception. This symptom can continue throughout the pregnancy.

Mood swings-During pregnancy, there are many hormonal changes that cause numerous mood swings. These are noticeable in early weeks after conception.

Swollen breast or nipples-This symptom is noticeable in 1 to 2 weeks after conception. In this, the breast feels heavier.

Backache-During pregnancy, there are changes in posture and loosening of ligaments that cause backache.

Fatigue-After one week of conception, pregnant women may face more issues of fatigue. They start feeling more tired because of more production of a hormone called progesterone.

Constipation-This is a common problem faced by pregnant women. This is because pregnancy hormones, slow down gastrointestinal movement.

Morning sickness-In the morning, loss of appetite, vomiting, and nausea are common symptoms of pregnancy.

Food cravings-Abrupt cravings of food items. These cravings can continue throughout the whole pregnancy.

Cramping and spotting-Slight bleeding is spotting, but the color of blood is lighter than your menstrual blood. This spotting occurs at the time of implantation of a fertilized egg.

Question 1: How many stages are there in human pregnancy?

There are three stages or trimesters in human pregnancy :

Question 2: In which stage or trimester, does the fetus grow rapidly?

In the third stage or trimester, the fetus grows rapidly.

Question 3: What are common symptoms of human pregnancy?

Question 4: What are the main complications faced by a woman during pregnancy?

Question 5: What is the placenta and write its function ?

The placenta is the structure that connects a mother with her fetus. Functions of the placenta are.

This process begins with ejaculation of sperms from males to the female’s vagina. Now these sperms will travel through the fallopian tube to meet the eggs which are released by the ovary and then the fertilization process will begin in the fallopian tube. The first step involves the fusion of male (sperm) and female (egg) gametes and then their nuclei will be fused to form a single nucleus and this results in the formation of zygote (also known as fertilized eggs). The zygote is the new beginning of a new individual.