The MathML comes in the HTML5 the current MathML version is 3 it was introduced in the year of 2015. The MathML stands for Mathematics Markup Language. It is used to represent the mathematical equation or expression in web browsers like other HTML elements. The 1st version of MathML released in the year of 1998 and after that in the 2nd version was released. Basically MathML is a complex mathematical formula or equation visual representation made easy. The MathML is supported in the HTML5, all the MathML tag must be used inside the <math> and </math> tags. The MathML is used to describing mathematics as a basis for the machine to machine communication, it is intended handling by specialized authoring tools such as equation editors and it is meaningful to other applications also. MathML is not-capable:

Below example gives you a brief idea about MathML: 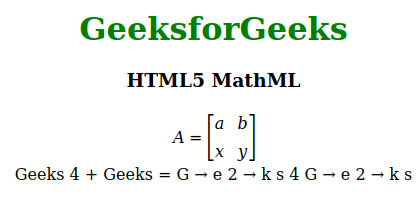 Note: There are almost 30+ MathML tags available. All the tags are listed below in table format:

Supported Browsers: The browsers supported by HTML5 MathML tags are listed below: