V8 is a high-performance, open-source JavaScript and WebAssembly engine used by Google Chrome and Node.js. In this article, we will be going to see what happens behind the scene of V8 Architecture.

There are basically three steps involved in processing the code:

Now let’s understand each of these phases in depth.

1. Parsing Phase: During the parsing phase, the code is broken down into its respective tokens.

Below is the generated AST for the above Example: 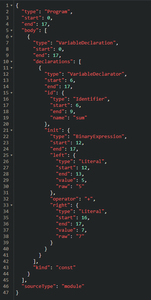 2. Compilation phase: Compilation is the process of converting human-readable code to machine code. There are two ways to compile the code :

Unlike other languages, The V8 engine uses both a compiler and an interpreter and follows Just in Time(JIT) Compilation for improved performance.

Just in Time(JIT) Compilation: The V8 engine initially uses an interpreter, to interpret the code. On further executions, the V8 engine finds patterns such as frequently executed functions, frequently used variables, and compiles them to improve performance. Suppose the performance degrades or the parameters passed to the function change their type, then the V8 simply decompiles the compiled code and falls back to the interpreter.

Example:  If the compiler compiles a function assuming the data fetched from the API call is of type String, the code fails when the data received is of type object. In this case, the compiler de-compiles the code, falls back to the interpreter, and updates the feedback. The V8 engine uses the Ignition interpreter, which takes in the Abstract Syntax Tree as the input and gives the byte code as the output, which further proceeds to the execution phase. When the code is being interpreted, the compiler tries to talk with the interpreter to optimize the code. The V8 engine uses the Turbofan compiler, which takes the byte code from the interpreter and feedback(from the interpreter) as the input and gives the optimized machine code as the output.

3. Execution Phase: The byte code is executed by using the Memory heap and the Call Stack of the V8 engine’s runtime environment. Memory Heap is the place where all the variables and functions are assigned memory. Call Stack is the place where each individual functions, when called are pushed to the stack, and popped out after their execution. When the interpreter interprets the code, using an object structure, where the keys are the byte code and the values the functions which handle the corresponding byte code. The V8 engine orders the values in the form of a list in memory, which is saved into a Map thereby saving a lot of memory.

Inline Cache: Inline Cache is a data structure used to keep track of the addresses of the properties on objects, thereby reducing the lookup time. It tracks all the LOAD, STORE, and CALL events within a function, by maintaining a Feedback Vector. Feedback Vector is simply an array used to track all the Inline Caches of a particular function.

For the above example, the IC is :

Upon Calling the function :

On the first call, the IC changes to:

Here the code is interpreted in a manner, where the arguments passed are only of integer type. i.e the function will only work for integer values.

On the second call, the IC changes to:

Here the code is interpreted in a manner, where the arguments passed can either be of integer type or string. i.e the function will work for both integers as well as strings. Thereby, the running time of the function is faster if the type of arguments received is not modified. Inline caches keep track of how frequently they’re used and provide necessary feedback to the Turbofan compiler. The Compiler takes the byte code and type feedback from the interpreter and tries to optimize the code and produces new byte code. Suppose the compiler compiles a function assuming the data fetched from the API call is of type String, the code fails when the data received is of type object. In this case, the compiler de-compiles the code, falls back to the interpreter, and updates the feedback.

The Compilation and Execution of the JavaScript code go hand in hand.

Below is the diagrammatic representation of the compilation of JavaScript code. 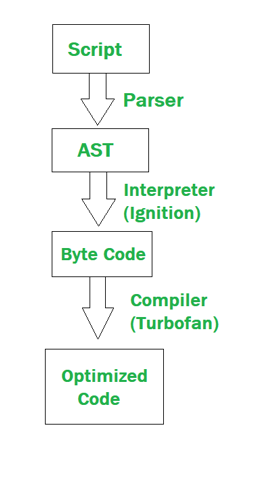 Garbage Collection: It is an important aspect of programming and the techniques used by the garbage collector have improved the latency, page load, pause times, etc. The V8 engine is provided with the Orinoco Garbage Collector which internally uses the Mark and Sweep Algorithm to free up space from the memory heap.

My Personal Notes arrow_drop_up
Previous
How to use spectrum colorpicker get color with transparency ?
Next
How to hide/show an image on button click using jQuery ?
Recommended Articles
Page :
How to convert 3-digit color code to 6-digit color code using JavaScript ?
12, Mar 21
How asynchronous JavaScript code gets executed in browser ?
06, Apr 21
JavaScript code for adding new elements in a dynamic way
20, Sep 21
How JavaScript works and code is executed behind the scene ?
20, Sep 21
How does asynchronous code work in JavaScript ?
28, Oct 21
How to break JavaScript Code into several lines ?
25, Jan 22
How to Execute JavaScript Code ?
07, Feb 22
How to write a simple code of Memoization function in JavaScript ?
07, Mar 22
How to convert CoffeeScript code in JavaScript ?
23, May 22
How can JavaScript codes be hidden from old browsers that do not support JavaScript ?
14, Feb 22
How are the JavaScript window and JavaScript document different from one another?
01, Apr 22
Explore the concept of JavaScript Function Scope and different types of JavaScript Functions
16, Mar 22
How to share code between Node.js and the browser?
11, Jul 19
How to debug code in ES6 ?
15, Feb 22
How to write ReactJS Code in Codepen.IO ?
02, Mar 20
Generate a QR code in Node.js
04, Jan 21
How to validate if input in input field has BIC or Swift code only using express-validator ?
29, Jul 20
How to create and run Node.js project in VS code editor ?
21, Jan 21
How to solve npm error npm ERR! code ELIFECYCLE ?
18, Feb 21
How to run Java code in Node.js ?
18, May 21
How node.js prevents blocking code ?
24, Jun 21
How to write code using module.exports in Node.js ?
27, Sep 21
How to handle errors for async code in Node.js ?
07, Oct 21
How to include HTML code snippets in HTML ?
10, Nov 21
Article Contributed By : 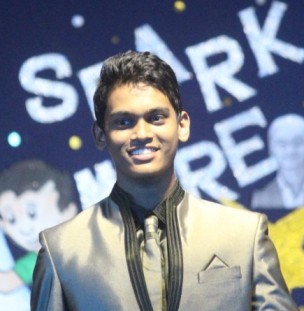