Also, there is another powerful git command to inspect a git repository, the git blame command.

We can identify the name and email id of the last person who made changes or added a given line of code in a file using the git blame command. It would help us to reach that person and enquire him about that piece of code and its functionality on certain occasions.

Let’s say in a git repository we have to identify the author details and commit information of a given line of code in a given file of the repository. The same is shown below. The command is illustrated below with help of an example

Step 1: Move to an empty folder and initialize it with an empty git repository.

Step 2: Clone the repository for which you want the information. Here I am cloning a famous repository create-react-app from GitHub. Make sure to change the directory to the cloned repository.

Step 3: To get the author name and commit information, execute the git blame command as shown below. Replace the <file-name> option with the relative path of the file from the current directory for which you want details:

Step 4: Here I want details for the file CONTRIBUTING.md which is present in the same directory I am currently at. So, I will execute the below command: 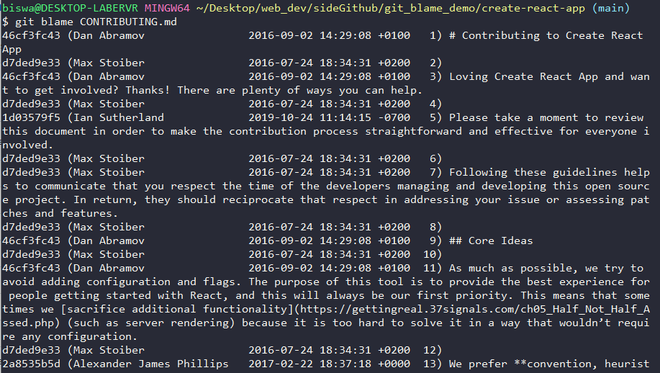 The output of the git blame command on the CONTRIBUTING.md file

Tip: Observe that the last column of output displays the line number along with the code on that line.

Output is shown below: 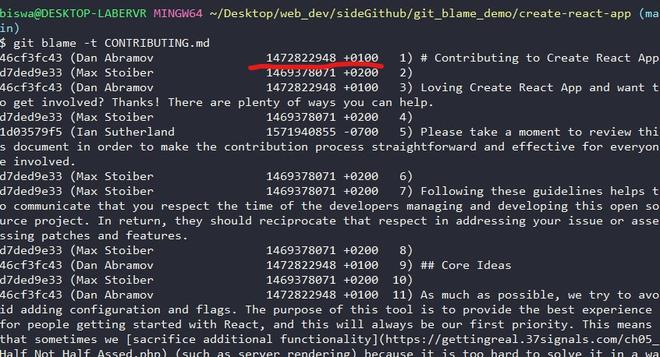 Now, execute the below command. Replace <commit-id> with the commit id that you copied just now.

In my case the command is below:

The git log command helps to view the commit history. The -p or –patch option shows the author details and changes (addition or deletion) in the code in the commit of commit id provided.

Options with git blame: Git provides various options with the git blame command for viewing the details of modification in code in a file. Some commonly used options are given below:

To view output for a range of lines

The below command shows output for lines 2 to 5 both inclusive.

The output is shown below:

Note: You will get the same output for command – git blame -L 4,+3 README.md. Here 4,+3 signifies output for 3 lines starting from the fourth line.

To view the author email id

The above command will show the author’s email id instead of the author’s name in the result. The output is shown below:

To view changes not older than the given time

The above command is used to view git blame output for commits not older than 3 months for the file CONTRIBUTING.md. The output is shown below: 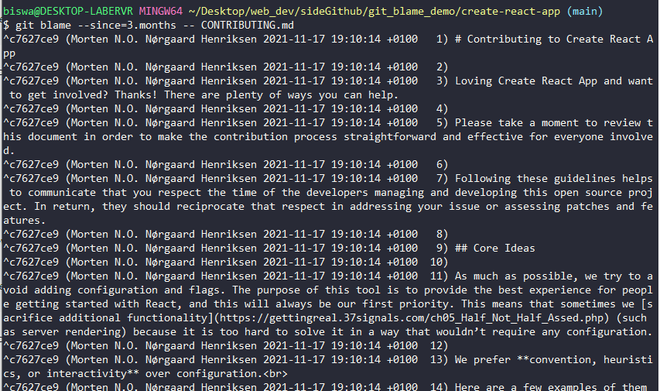 In the above command, we can see that it shows several commits with commit id starting with ^. The caret symbols signify the commits made before the time specified, in our case, it is three months. Hence we need to filter out them from our output. To tackle that we can modify our code as below:

The above code simply filters the output after removing commits starting with the ^ symbol. Hence, the output shows commits not older than three months (from the time the code is executed). The result is shown below:

An alternate option to the command line (GUI based): Git hosting sites like – GitHub, Bitbucket, GitLab offer GUI displays for git blame, which gives a clear display of modification history in a file.

Step 1: Navigate to the file for which you want to see the modification history and click on the Blame option as shown below. 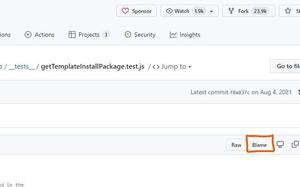 Step 2: The structure of output is described in the image below : 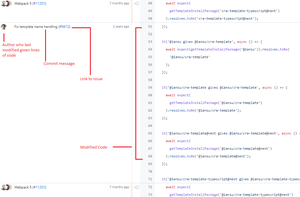 Hence, we saw that git blame is a very useful command in inspecting a repository. It gives a great insight into the commit history and can be used along with other git commands to get desired results.

Previous
Java Program to Draw a Shape in Excel Sheet using Apache POI
Next
Spring Boot - AOP Around Advice
Related Articles
1. How to Install, Configure and Use GIT on Ubuntu?
2. How to use GIT in Ubuntu ? (Part -2)
3. What is Git-Ignore and How to Use it?
4. Use of Submodules in GitHub
5. How to Use Git Log to Format the Commit History?
6. How to Use Git with Eclipse?
7. How to Install and Use Git in Google Colab?
8. Git - Pack Objects
9. How to Install GIT on VMWare?
10. Git - Packfiles
Article Contributed By :