How to Upload Image into Database and Display it using PHP ?

Approach: Make sure you have XAMPP or WAMP server installed on your machine. In this tutorial, we will be using the WAMP server.

1. Create Database: First, we will create a database named ‘geeksforgeeks‘. You can use your existing database or create a new one.

The id should be in Auto incremented(AI). Your table structure should look like this:

Or you can create a table by copying and pasting the following code into the SQL panel of your PHPMyAdmin.

To do this from SQL panel refer to the following screenshot. 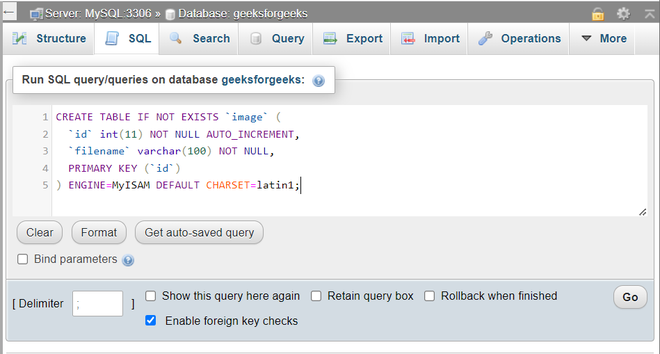 create a table ‘image” from the SQL panel

We will be using Bootstrap here to use Bootstrap’s form control. Below is the code to include the Bootstrap CDN link in the head section of the HTML code.

We will now create a folder named “image“. The files uploaded by the client on the server will be stored in this folder. Create index.php and style.css. Keep your main project folder (for example here.. GeeksForGeeks) in the “C://wamp64/www/“, if you are using WAMP or “C://xampp/htdocs/” folder if you are using the XAMPP server respectively. The folder structure should look like this: 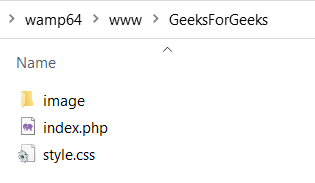 Program: Now, we will create an HTML form for uploading image files (you can upload any type of file like .pdf or .mp4) and will display the uploaded image.


You can copy the above code and mention it into the main code directly or create a link as same in the HTML code and attach it with the main code which is given below. As mentioned that if you link the stylesheet file you should create another file in .css format and save it in the place where the main file is to be saved. The form created with the help of the POST method and the enctype=”multipart/form-data” is the action which encodes the files and allows you to send them through POST.
Now we are working on the PHP code for the transfer of the image from any folder of the system in a particular folder which you are mentioning and storing it into the database as a directory.


Explanation: The following are the explanation to create the PHP code which is the following:

Combination of the above codes: The final code of upload the image into MySQL using PHP is as followed.

Conclusion: The uploaded image into the database with the PHP code is simple and used for various purposes. The code helps to upload the image and then uploaded the image into the database and can be shown in another folder.
One thing you should note is that when you are running this program there should be a possibility that the image is not uploaded more than 2 MB because the PHP program has set the default value of uploading an image of 2 MB and posting the image of 8 MB. For exceeding the size of uploading the image you should follow the following steps:

PHP is a server-side scripting language designed specifically for web development. You can learn PHP from the ground up by following this PHP Tutorial and PHP Examples.