How to uninstall and update any dependencies through NPM ?

NPM (Node Package Manager) is the default package manager for Node.js. It manages all the packages and gets installed with the installation of Node.js. When we install any package into our project using npm client on the command line then it gets installed in the node_modules folder and the information such as the version of that package is reflected in the package.json file.

Step 1: Install Node.js if Node.js is not installed in your machine.

Step 2: Create a folder for your project and initialize a new Node.js project with default configurations using the following command on the command line.

Project structure: After following these steps your project folder should contain a package.json file. 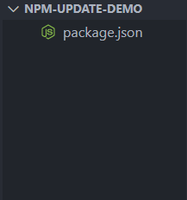 Now to begin with the example we will install an old version of two packages named express and chalk using the following command on the command line.

To see the outdated packages for your project you can run the following command.

When using the outdated command we get the following output. In the output, the first column is the name of the package and the second column shows the version installed for our project. The third column represents the wanted version that is the version to which we can safely upgrade without any breaking changes. The fourth column represents the latest version of that package.

Now when we uninstall the chalk package using uninstall command as shown below: