How to Run PHP File in Chromebook?

Chromebook is a new type of desktop. It is basically run in a chrome operating system. It is a kind of laptop. But it is very cheap compared to a laptop. Because of these, as it is run in web-based chrome operating system it is slow & less usable than laptops. But as it is cheap in price so, many people buy this product as they want to do a limited number of task or operations. Compared to laptops Chromebooks may not support some software. As PHP is mainly a web-based programming language, it can be run in Chromebook. We can’t install it as we do in normal Windows or Linux machines. But, we can install it in another way. For, running PHP files we need to install PHP in Chromebook. But, before installing PHP, we need two prerequisites. First and most important, we need to install Linux Terminal in Chromebook. It is the command prompt of the Chromebook. Similar to the Linux terminal. And we need to install Apache in it. Apache will help PHP codes run on the server. Then we can proceed with it.

After writing the command you need to wait a while. As it will start the installation. 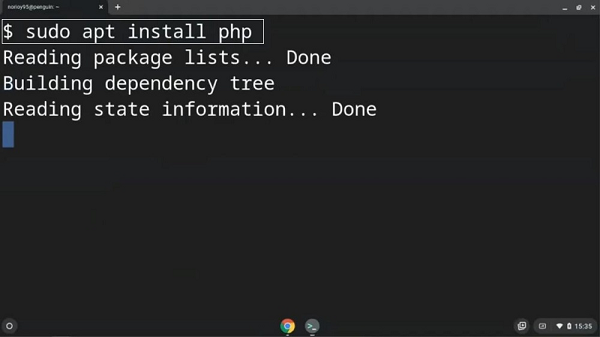 Step 2: After some time the screen will pause automatically. As it needs confirmation. Then it will execute the next steps. For giving confirmation only enter Y. It will start its process again. 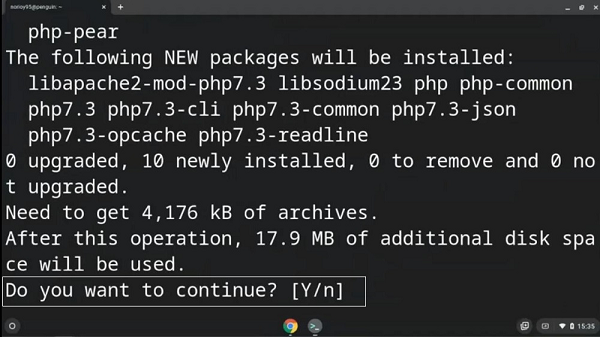 Step 3: You need to wait for some time. As it will install all packages of PHP in Chromebook. Also, it needs to configure itself with the machine. It is also going to make some changes to your server so that PHP files will run easily. 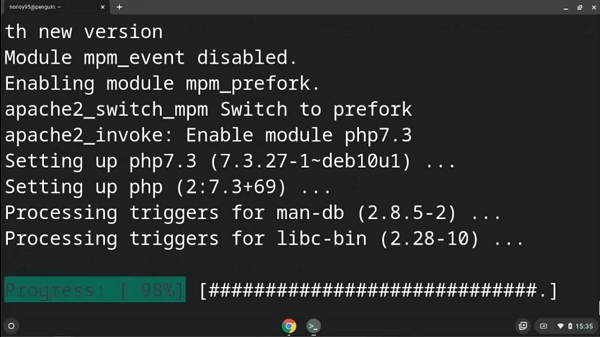 Step 4: At last, PHP installation is completed. Now, you have to browse to localhost. This will provide you with all the information about your installed PHP. this is going to be your handbook in PHP. While using PHP, you need to go through this link many times. If the details come to you, then you have successfully installed PHP. 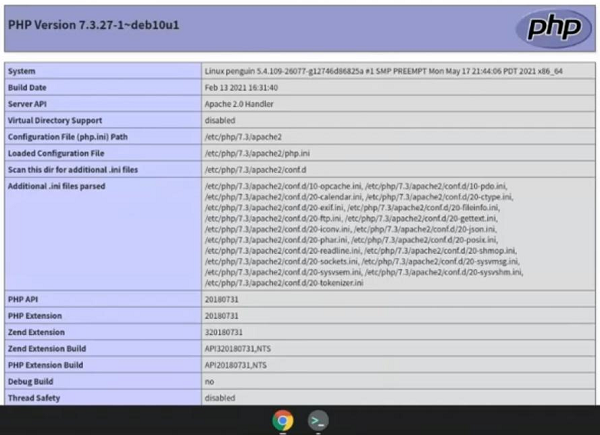 Step 1: For creating a PHP file in Chromebook the following command should be run first. This command will help to create a PHP file in a certain folder where the PHP file can run.

Step 2: Then an editor-type interface will be opened in that terminal. Easily a  PHP code can be written in that & save it using Ctrl+S. Here, the below simple code has been used.


Step 3: Then after saving that file the following command should be run. This command will automatically run that PHP file. It will open that file in Chrome. This is the way to run any PHP file in Chromebook.

My Personal Notes arrow_drop_up
Next
Spring Boot - Logging
Recommended Articles
Page :
Docker compose tool to run multi container applications
04, Jul 20
How to Install and Run Apache Kafka on Windows?
03, Jun 20
How to Make, Save, and Run a Simple VBScript Program?
21, Jun 20
How to Install And Run VMware Tool in Linux?
24, Apr 21
How to Install and Run UserRecon Tool?
15, Jul 21
How to Compile, Decompile and Run C# Code in Linux?
19, Sep 21
How to Run Android APK on Windows?
09, Mar 22
How to run Linux GUI apps on Windows with WSLg?
26, Mar 22
How to Run MongoDB as a Docker Container?
18, Jun 22
C program to check whether the file is JPEG file or not
05, Jun 20
How to Create the Virus File that Deletes the IMP File of the Operating System?
10, Apr 21
How to Install PHP Extensions in your Docker File?
23, Apr 22
Automating File Movement on your system
26, Oct 15
Backup & Restore Files using Windows File History
08, Mar 21
How to use Functions of Another File in Flutter?
05, Mar 22
How to Insert a PDF File in MS Excel?
01, Sep 21
How to Create an Unnamed file in Windows?
05, May 20
How to Remove the Password from a Zip File?
21, Jun 20
How to Delete a File or Folder using CMD?
07, Jul 20
How to Protect a PDF File from Copying?
20, Aug 20
How to Set Classpath When Class Files are in .jar file in Java?
11, Feb 21
How to Create a Password Protected ZIP File in Linux?
22, Feb 21
How to Make File and Directory Undeletable Even By Root in Linux?
09, Feb 21
How to Add JAR file to Classpath in Java?
11, Feb 21
Article Contributed By :