How to install TypeScript ?

Typescript validates your JavaScript ahead of time with static type checking. The code is interpreted by a browser, but if your code is broken you won’t catch it until runtime when the browser rows an error. The language is a strict superset of JavaScript, which means when you open up a ts file you can write plain JavaScript with all of its extra features being completely optional.

We can run the typescript compiler using the tsc command, it will take the typescript file and transpile it into vanilla JavaScript. A typescript project always has a ts config file, which helps us to customize the behavior of the compiler. The primary goal of typescript is to enable static typing, which is achieved by allowing the user to annotate code with types.

Following is the step-by-step guide to install TypeScript on:

Step 1: Go to the start menu and click on the command prompt.

Step 2: To install typescript we have to use NPM, NPM is called a node package manager. As its name suggests, it is used to install NodeJS packages onto our system.

Run the following command in the same NodeJS command prompt to install the typescript:

The above command will install the typescript onto our local system. To verify the installation, run the following command:

Here tsc is a typescript compiler and the -v flag indicates that we are displaying the version of the typescript as shown in the image below:

At this point, typescript is successfully installed onto your system.

Step 3: To install a specific version of a typescript, use the following command with ‘@’ followed by version.

Here, ‘x’ can be changed with the version that we want to install, as shown in the image below:

Step 4: To uninstall typescript, use the same command that is used to install the typescript and replace the installation with uninstall. Here is the command:

Step 1: Create a folder onto your desktop and create a file named “main.ts”. You can write whatever name you want for this file and folder.

Step 2: Open up the NodeJS command prompt and navigate to the folder path that we created in step 1.

Step 3: Run the Initialization command in that command prompt to create the necessary configuration file for our simple project.

Step 4: Open up the main.ts that we created in the step1. Below is the hello world code in the typescript. It will display the string in the console that will confirm the working of the typescript compiler.


The above code should be pasted and saved in the main.ts file before executing the typescript compiler.

Step 5: Run the typescript compiler with the file name as an argument to see results.

This will create a compiled JS file from that typescript file. And now to run the JS file we will be using the NodeJS as below. 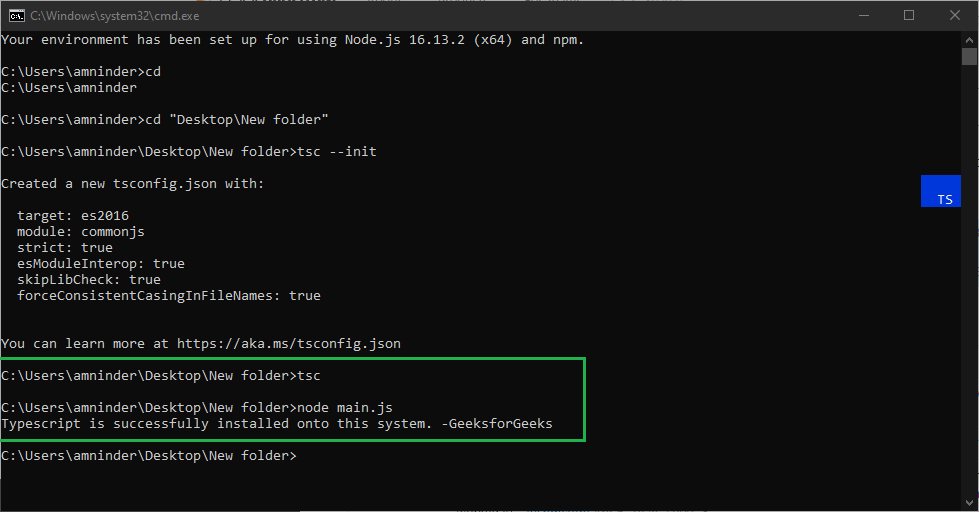