How to Install Ruby Bundler on Windows?

Ruby is a high-level and open-source programming language. It is very useful in many aspects. Like other programming languages, Ruby is nowadays a highly useful programming language. Bundler is a type of environment manager in Ruby. It is generally used to install and update correct Gems for Ruby. Gems are highly useable packages in Ruby. Gems can be installed in both online and offline modes. bundler provides a platform, an environment for Ruby projects. Proper Gems are being installed in the Ruby projects by using Bundler. Bundler is an exit version of dependencies used for installing a proper version of Gems. But, before installing Bundler in the machine Ruby should be installed in the machine previously.

Follow the following steps to install the Ruby bundler in Windows:

Step 1: At first, the PowerShell terminal of windows should be opened. In this case, the command prompt of windows should not be used. As command prompt can’t able to change & configure machine properly here. So, after opening the Powershell, the following command should be executed. This command will only be needed for installing Bundler in the machine. Wait for some time till the process is completed. As it will install the proper version according to machine configuration.

Step 3: Also, besides that, one special command can be run in windows as an alternative. If the below command is executed, one output that provides the mode, last write time will be displayed. Also, it will display the directory where the Bundler is installed. Hence, the installation is completed successfully. 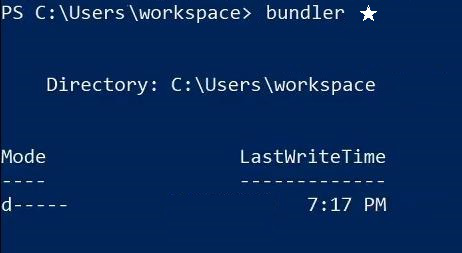