How to install bootstrap in React.js ?

Bootstrap is one of the most popular front-end open-source toolkit for developing responsive, mobile-first front-end projects on the web. It contains various types of design templates based on CSS and JavaScript. It has various prebuilt components such as Accordion, Alerts, Carousel, Button, Card, Breadcrumb, etc. Instead of writing code from scratch, one can use bootstrap templates to make the work a lot easier. There are multiple ways to use Bootstrap in your local project such as by using Bootstrap CDN or installing bootstrap in React JS.

However, using Bootstrap CDN is an easier way to add Bootstrap to the project. There is no need to install or download any package. One can add simply by putting a <link> into the <head> section of the file or react app. But today we are going to discuss how one can install Bootstrap in React JS.

Following are some steps to install Bootstrap:-

Step 2: Change directory to the project folder by entering the following command.

Project Structure: Now we are in our project directory. As we created the ReactJS successfully so let’s install the required package. After creating React app our project structure would look similar to the following. 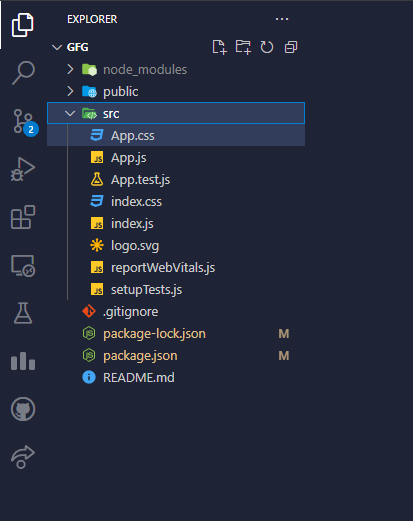 Step 3: Run the following command in the terminal. Do check whether you are in React App directory or not. For the sake of convenience I have taken F:\gfg  as my current working directory, the directory of my React App(gfg).

If you observe in the above command I have not mentioned the version of bootstrap. By default, it will install the latest version of bootstrap. But if you are following some tutorials, courses or wanted to build your React JS app in a particular bootstrap version, you can do so by passing ‘@version’ just after bootstrap that is npm install bootstrap@4.1  where 4.1 is name of version.

Our current working directory is F:/gfg.  Bootstrap is now successfully installed you can verify by searching the bootstrap folder inside node_modules folder. 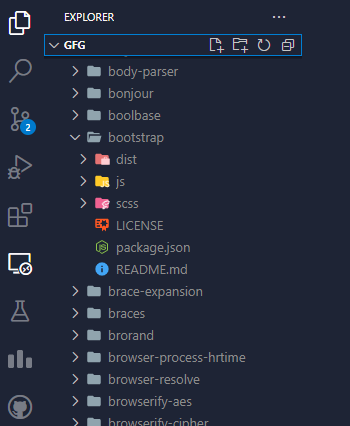 You can also observe some changes in your package.json file is after installing bootstrap an entry is added inside the dependencies part of package.json similar to “bootstrap”: “version”. 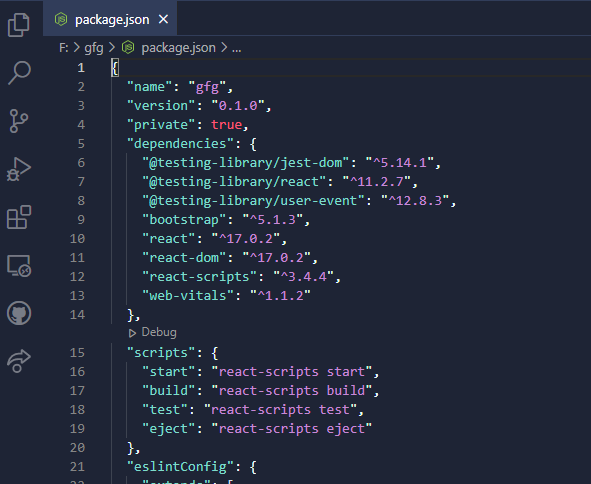 Bootstrap inside dependencies after installation

Step 4: As of now bootstrap is successfully installed in React app but to use it we must import it inside React file. I am importing Bootstrap minified CSS file and Bootstrap JavaScript minified bundle file inside index.js which is in F:\gfg\src.

The above to two statements are required in our index.js to import dependencies inside React file in order to use bootstrap classes in our React app components.


Explanation: The above code would probably look like index.js except line 1 and 2 they bootstrap is not imported as dependencies inside index.js by default on creating  React App. In line 1 and 2 we have imported bootstrap minified css and bootstrap javascript minified bundle. Now we can use bootstrap classes inside our React app components.

Step 5: We are all set to use built-in Bootstrap classes but to use Bootstrap’s JavaScript components in our react app we have to install  popper.js and jquery. In case they are not installed already. To install both jquery and popper.js write the following line in terminal and hit enter.

After making all these additional changes your index.js file should look like the following


Step to run the application: Save your file and run npm server by entering following command in the terminal.

Output: After running the server, your output would look like this

Complete Interview Preparation
View Details
System Design-Live Classes for Working Professionals
View Details
Most popular in ReactJS
Most visited in Web Technologies
We use cookies to ensure you have the best browsing experience on our website. By using our site, you acknowledge that you have read and understood our Cookie Policy & Privacy Policy