How to Graph three variables in Excel?

A graph consists of a set of vertices and edges. Different types of graphs are bar graphs, line graphs, charts pies, and histograms. In mathematics, the graph is a pictorial representation of data in an organized way. The graph provides us with the relationship between various quantities. Graphs are very much helpful to solve our daily issues. Graphs are used to denote our networks. Graphs are also included in our social networks, such as Facebook, LinkedIn, and Instagram. The graph of a function of three variables is the collection of points (x, y, z, f(x, y, z)) in four space where in the domain of (x, y, z). Plotting three variables in a graph is very easy. Ultimately using graphs, we can visualize data and examine relationships among three variables. To graph three variables, the best choice is clustered bar chart. We can graph three variables using many programs such as Excel, power point etc.

A line graph is a graphical representation of data that changes over a period of time. It consists of a horizontal x-axis and a vertical y-axis. The X-axis consists of the time period, and the y-axis is the specific item. It helps us to analyze whether a specific item is increasing on the y-axis over time. A line graph can be connected using various points in a straight line. It helps us to analyze the two sets of values in which one set of data-dependent on the other value of data. A line graph can be made using excel for 2 or more variables. Excel is a Microsoft spreadsheet that can be used to view, edit and share the files easily and quickly. Using Excel, we can also make calculations and computation capabilities, graphing tools, and a macro programming language called visual basic application. Excel helps us to compare not only two variables using different ways of graphical representations but also we can compare three variables. We have different types of graphs and charts like line graphs, bar graphs, histograms, pie charts, and cartesian graphs.

Steps involved to make a line graph are given below

Step 1: Open the Excel sheet, enter the values of three columns and save the columns with names. 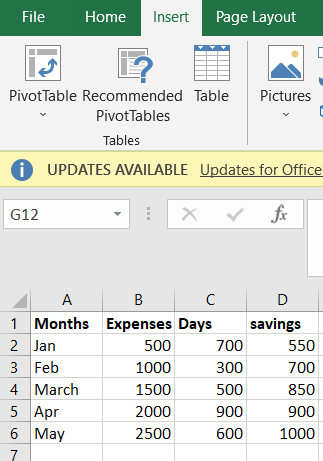 Step 2: Select everything, including headers, and open the insert tab in the navigation menu. 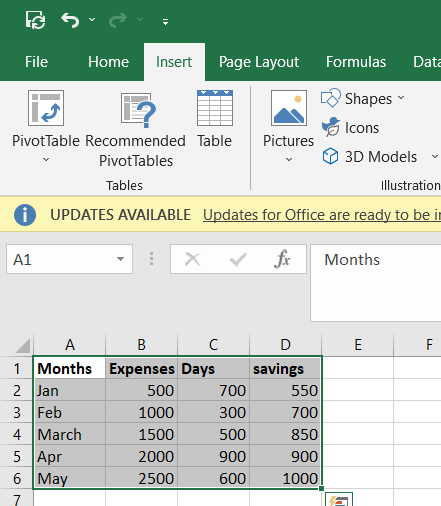 Step 3: Navigate to the charts session and click on line graphs. 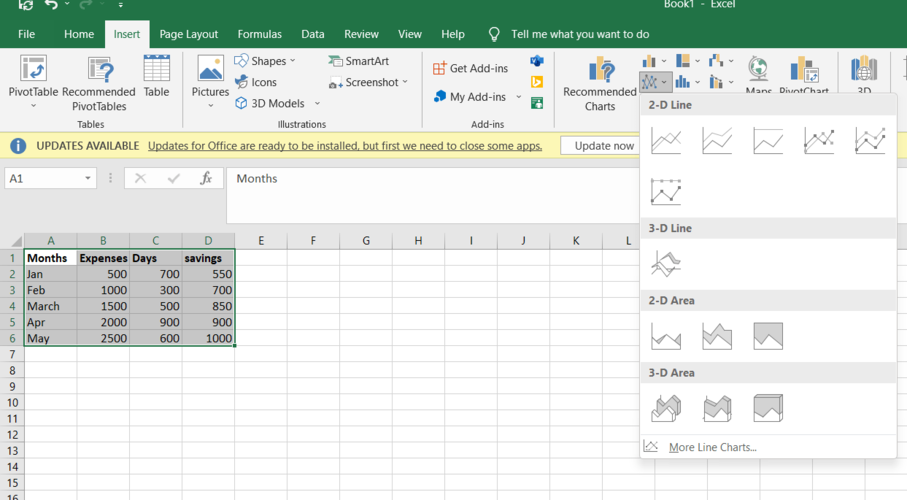 Step 4: Choose different colors for each of the lines so that it can be easily identified. We can style the line graph using various themes and styles which are available. 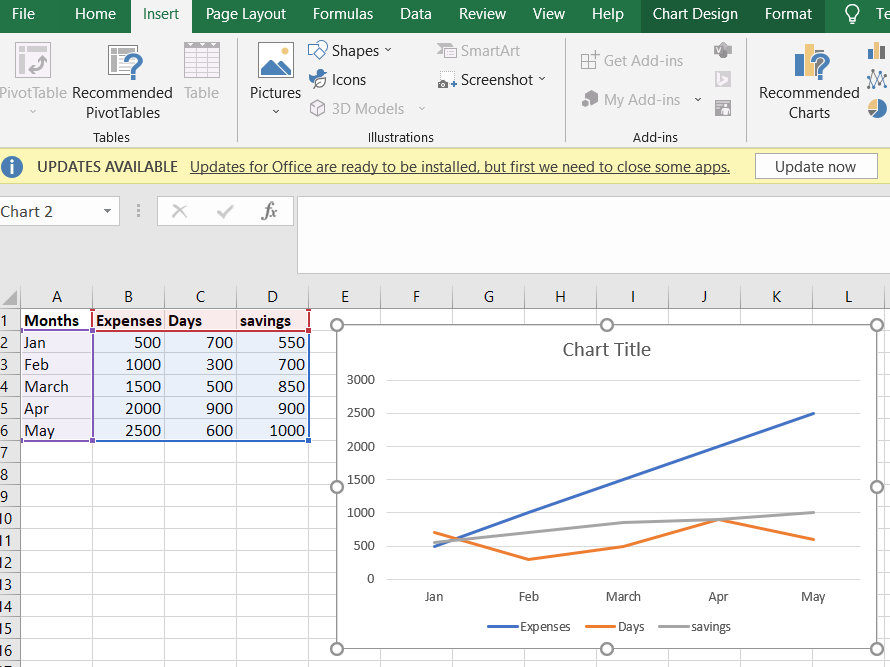 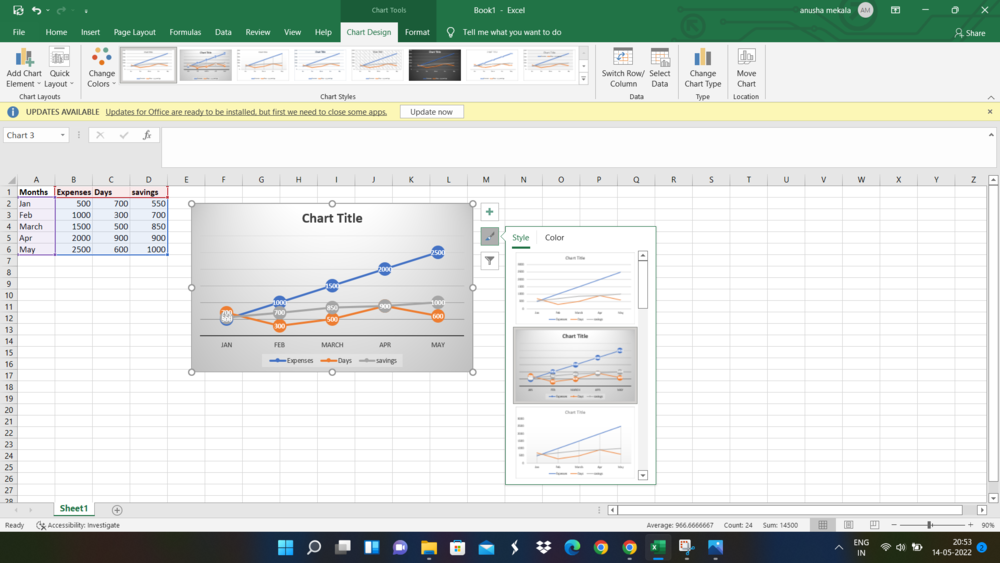 For the below example, a line graph was made in excel using three different variables. The three variables are month, expenses, and days and savings. In the graph, you can see the variations in each expense and day according to the month variable. from January to may there keep on the increase in terms of expenses as shown in the example. 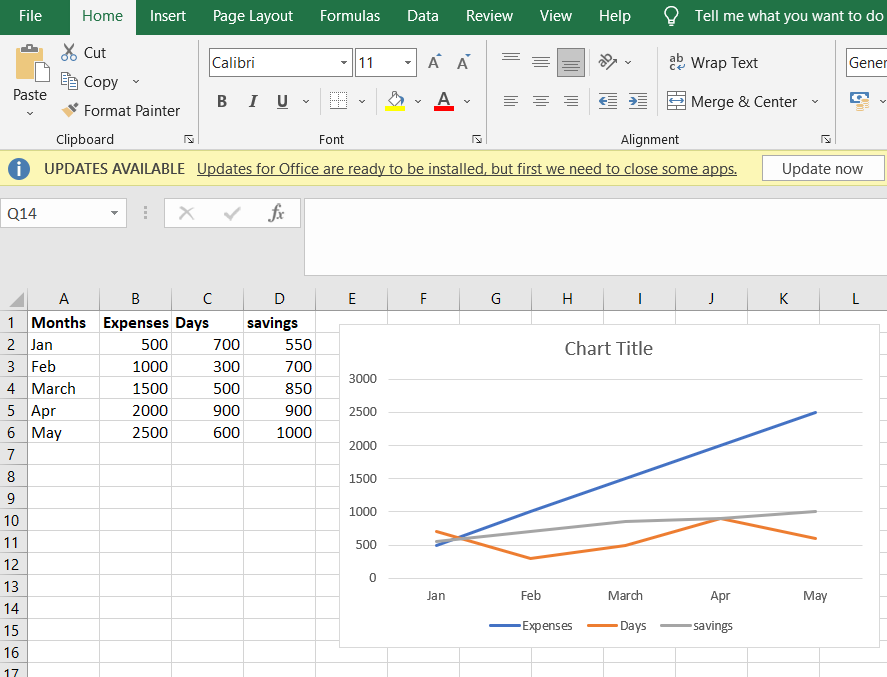 A bar graph is an image representation of a group of data in the form of rectangular-horizontal and vertical bars. The length and height of the bars measure the value of a variable. Bar graphs help us to compare different types of data with different groups easily. It gives the relationship between variables using two axis: the x-axis and y-axis. In every graph or chart, the variations can be shown over a period of time.

The steps involved in the making bar graphs are given below

Step 1: Open the Excel sheet and enter the values of 3 variables and save the variables with names.

Step 2: Select everything, including headers, and open the insert tab in the navigation menu.

Step 3: Navigate to the charts session and click on bar graphs.

Step 4: choose different colors for each line so that it can be easily identified. We can style the bar graph using various themes and styles which are available. 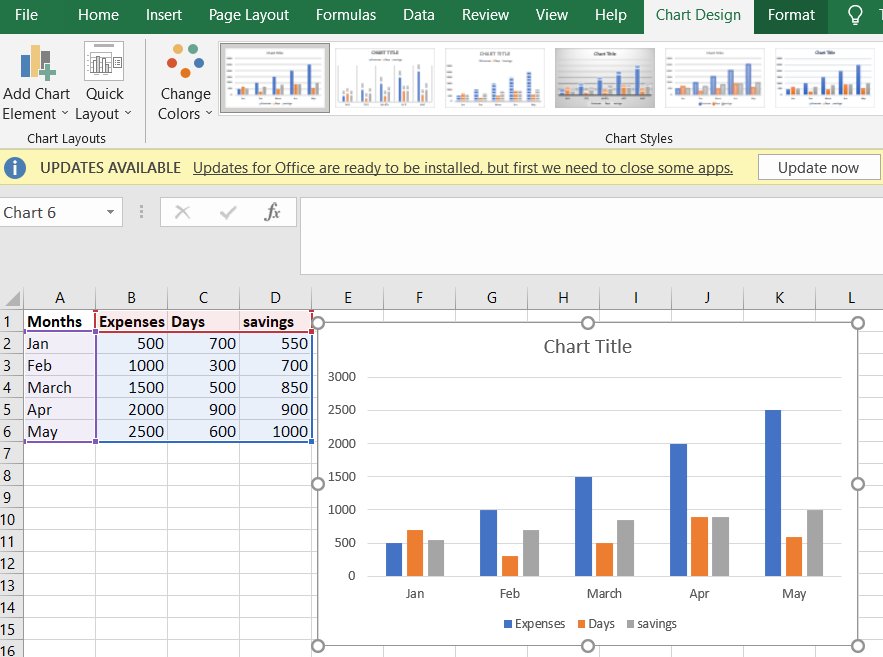 There are two types of bar graphs:

The below bar graph is a horizontal bar graph as the values of variables are along the axis, and the length of bars defines the value of a variable. The variables are Months, expenses, and days. In the graph we can see from January to May there is a increase in the expenses. 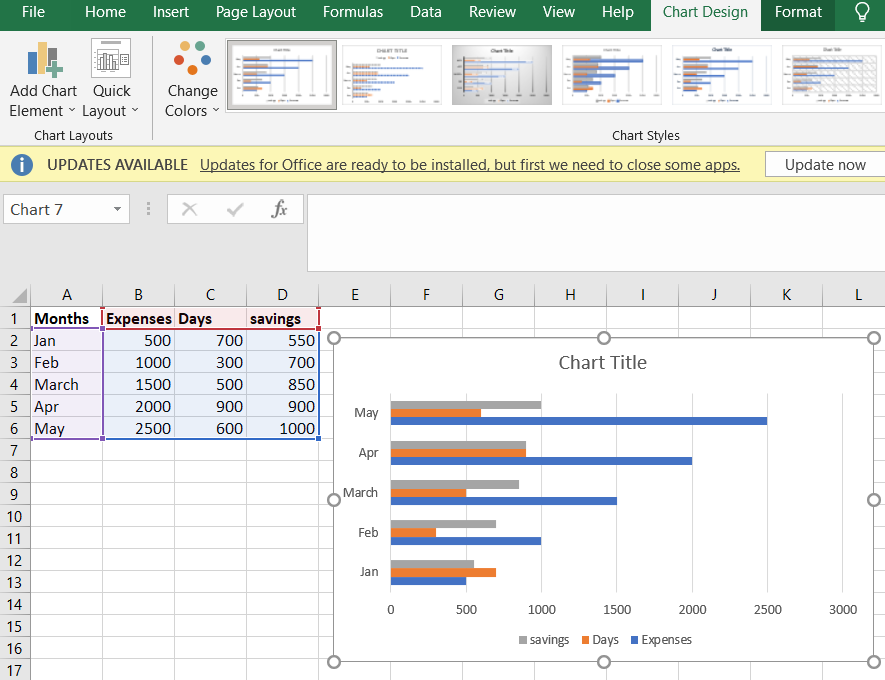 When a group of data is represented in a graph using bars vertical, those graphs are called vertical bar graphs. These bars show the measure of the value of the data. The data is represented along the y-axis, so the height of bars denotes the values of variables. Example, 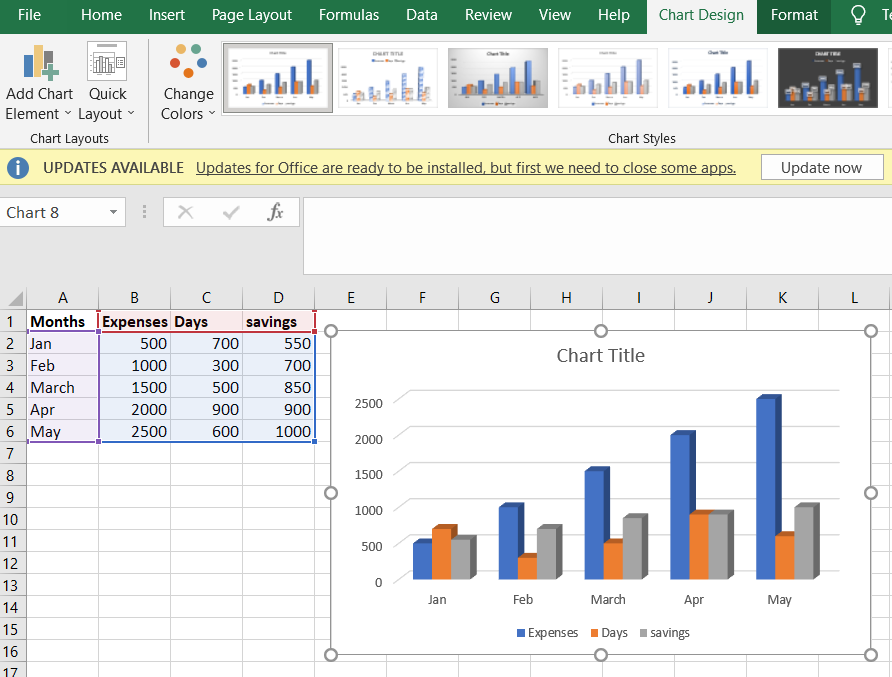 We can design various graphs using Excel as it provides a lot of options like 3-D bar graphs and 2-D bar graphs, and also we have pie charts and histograms for comparing different sets of values. Excel offers us a wide range of options to help in computing and calculations. The process of graphing three variables in Excel is explained step by step in this article.

Previous
How to Install MongoDB on GoDaddy Server?
Next
How to Install and Use Git in Google Colab?
Related Articles
1. How to Graph Three Sets of Data Criteria in an Excel Clustered Column Chart?
2. Variables and Data Types in VBA Excel
3. Editing Excel Macros in Excel
4. How to Find the Slope of a Line on an Excel Graph?
5. How to Create an Ogive Graph in Excel?
6. How to Make a Bar Graph in Excel?
7. How to Plot Multiple Lines on an Excel Graph?
8. How to Find the Y-intercept of a Line of a Graph in Excel?
9. How to Graph a Linear Equation using Excel?
10. How to make a 3 Axis Graph using Excel?
Article Contributed By :