How to Detect ARP Spoof Attack using Scapy in Python?

ARP Spoofing is also known as ARP Poisoning which is a type of cyberattack in which a malicious user sends falsified ARP (Address Resolution Protocol) messages over a LAN (Local Area Network). This results in the linking of an attacker’s MAC Address with the IP Address of a legitimate computer or server on the network.

Here we’ll perform passive monitoring or scanning to sniff the packets in the network after we receive one ARP Packet there are two things to be analyzed, on comparing them if they don’t match then the user is under ARP Spoof attack. In order to spoof and detect the ARP Packets inside the network use Scapy with Python to perform the detection of ARP Packets with the help of MAC Address and Interface.

Scapy is a packet manipulation tool for computer networks, originally written in Python. It can forge or decode packets, send them on the wire, capture them, and match requests and replies. It can also handle tasks like scanning, tracerouting, probing, unit tests, attacks, and network discovery. It runs on Linux, macOS, and Windows but the latest versions of Scapy support Windows out-of-the-box, so it is possible to use all the Scapy’s features on a Windows Machine also. Scapy can perform the following

To install Scapy it is necessary that you’ve Python 2.7 or Python 3.9+ version installed. If it is not installed then refer to this Python Installation. To prevent MITMs use Dynamic ARP Inspection, a security feature that will automatically reject malicious ARP packets that will be detected.

For a Linux user, it is possible to run scapy without libcap.

Another Method to install Scapy on Linux is by installing Python on Linux Machine and then installing the Scapy Package inside Python Shell.

After python is installed on the terminal open the python shell and execute the command to install scapy, then to use scapy for ARP Spoof Detection open Scapy to write your code in order to spoof and detect packets inside the network,

Then install Scapy via pip or apt. All dependencies may be installed either via a platform-specific installer or via PyPI

To install scapy on Windows it can be easily done through a command prompt, but for windows also Python should be pre-installed on the system. Then executing the commands to install scapy will be performed. 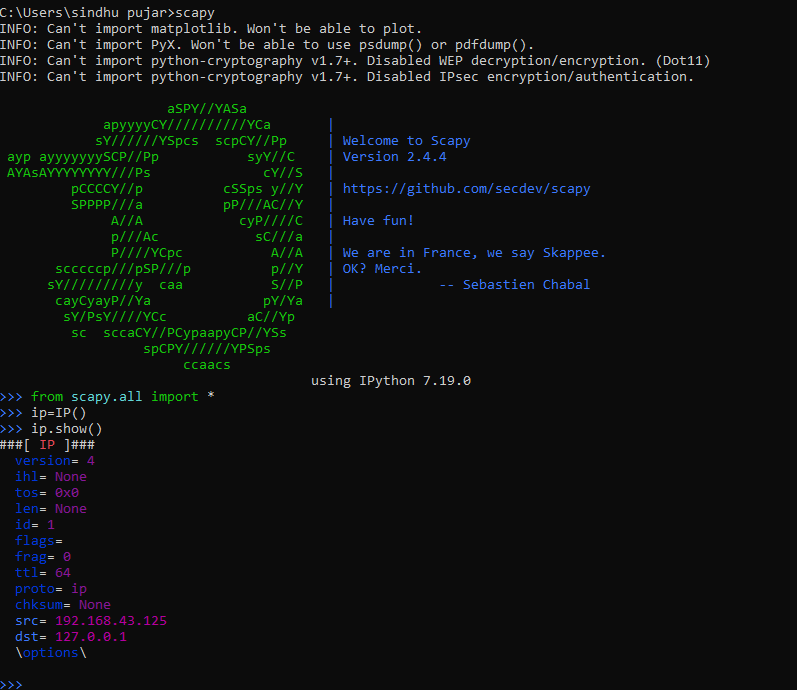 Now we have successfully installed python and scapy on the systems let’s proceed with importing the necessary libraries from scapy.


The program will detect if any kind of packet has a layer of spoofed ARP to do so execute the code.  The sniff() function will take a callback to apply to every packet that will be sniffed. In store=False tells the sniff() function to discard sniffed packets instead of storing them in memory, it is useful when the script runs for a very long time.


After sniffing for the eth0 interface it’ll display the contents of the interface here we see the interface is Ethernet and its related contents are displayed like IP Destination(dst), type of interface(ARP), source(src) 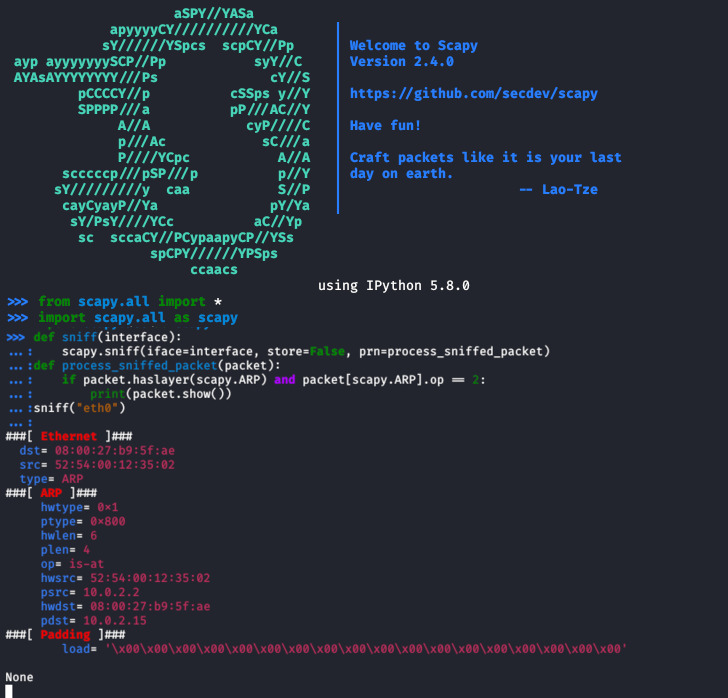 A function will be created to get the MAC Address and to process the sniffed packet, getting values of old MAC in the “originalmac” variable and value of MAC in the response as “repsonsemac” variable. Scapy encodes the ARP Packet type in the field “op” for operation, by default op is 1 or “who-has” which is an ARP request.


Now compare both the values and checking if they are similar or not in case they are not similar then this means the values have been spoofed. The values that are compared are the real MAC Address and the response MAC Address.

Below is the Complete Code 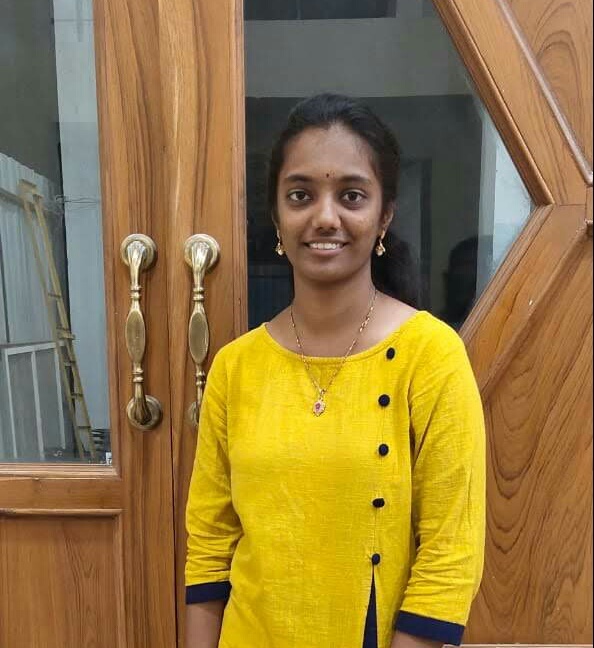