How to Declare and Initialize an Array of Pointers to a Structure in C?

We can statically allocate memory for 1D and 2D arrays in C language. The static memory is allocated in the stack memory. We can do static memory allocation of structure pointers in the following ways:

Let’s say we have a structure “node”, and we created different pointers to this structure. Now, to make a 1D array of those pointers in static memory, we must follow the following syntax:

We can access the pointers inside our array just like we access normal array elements. There is just a little bit of modification that we need to use the arrow operator to access the data present inside our structure pointer.

Step 2 – Accessing the pointers within the array

Note: The data type of the array must be the same as that of the structure followed by * (asterisk) sign, which signifies array of structure pointers.

We can access these arrays just like we did with the static ones so there is no change in syntax for that.

Note: In case of static arrays, you can initialize the array all at once during the time of initialization like –  node *struct_arr [10 ] = { struct_ptr1, struct_ptr2, struct_ptr3 ….. }, whereas dynamically allocated arrays need to be initialized index-by-index.

To allocate dynamic 2D arrays of pointers, first, we will create a 1D array dynamically and then will create sub-arrays at each index of that 1D array (basically an array of arrays containing pointers). Now, this requires the use of triple-pointers. We will understand this with the help of a diagram: 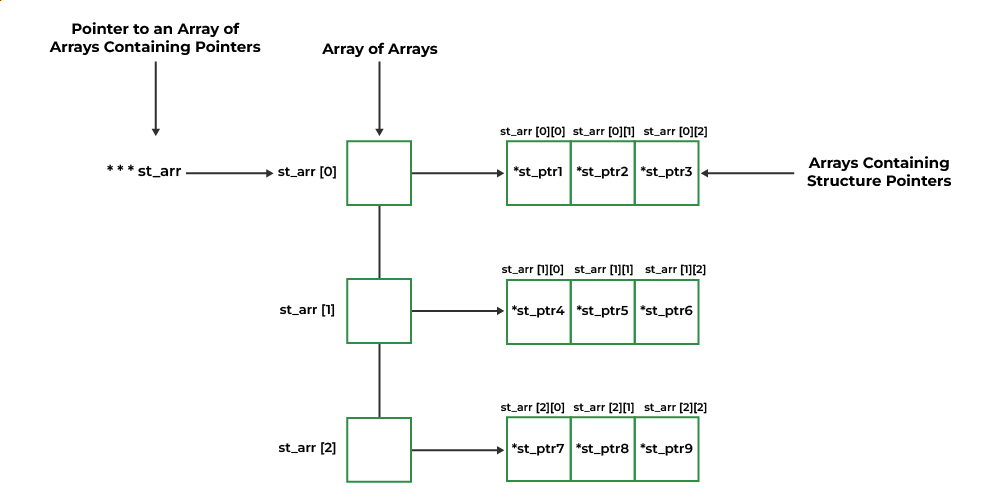 Explanation of the above figure: